The global weathering steel market size was USD 987.2 million in 2018 and is anticipated to expand at a CAGR of 5.6% from 2019 to 2025. The growth is attributed to the rising demand from construction industry owing to the remarkable properties of the product in terms durability, low maintenance, and greater life cycle. The phenomenal properties of weathering steel such as corrosion resistance, high strength, high-temperature resistance, and fatigue resistance make it suitable in outdoor decorations and buildings. According to the Institution of Civil Engineers, the global construction output is anticipated to reach USD 15.5 trillion by 2030. This is likely to augment the market growth in near future.

Increasing traffic congestion in railways and roadways and increasing need for global connectivity from islands to cities is likely to boost the demand for bridges in near future. Greater life cycle of weathering steel coupled with superior corrosion resistance is anticipated to drive its adoption in bridge construction. The product is also used in road construction for earth retaining structures. As per the stats released by the American Society of Civil Engineers (ASCE) in 2017, bridge rehabilitation and redevelopment in U.S. is likely to attract an investment of USD 123 billion in the forthcoming years. Thus, favorable investment in bridge construction and rehabilitation is likely to positively influence the market growth. 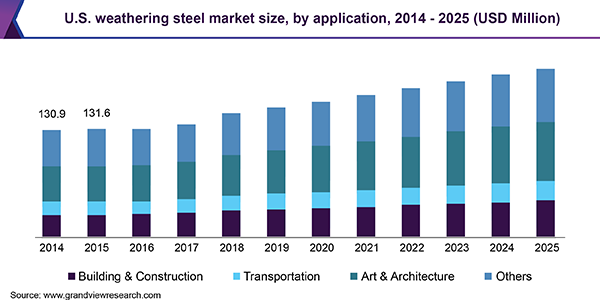 Weathering steel is also referred as Cor-ten steel, a trademark name given by United States Steel. The cor-ten steel is available in two grades, namely, A242 (COR-TEN A) and A588 (COR-TEN B). The yield strength and ultimate tensile strength remains same for both the grades. Only the thickness of plate vary according to the weight of the plate required.

Weathering steel it is not suitable in marine environments and in humid subtropical climates as the rusted layer may continue to corrode instead of stabilizing into a protective layer. In addition, careful designing of a construction project plays a major role in the weathering steel market as the run-off water from wet rusted steel may negatively impact other construction materials. This is a particular problem during the formation of protective layer.

Building and construction was the largest segment accounted for a volume share of 47.4% in 2018 owing to the rising need for replacing old bridges and roads and to increase the road connectivity to withstand the load of increased on road vehicles is likely to augment the weathering steel over the forecast period. In Australia, Jacobs Engineering Group recently designed three bridges in weathering steel to replace timber rail over bridges on the Country Rail Network in New South Wales, Australia.

In transportation, the product is used in heavy-duty applications, such as railway vehicles and shipping containers. Railway vehicles made of weathering steel are strong, hardwearing, take higher payloads and are relatively light compared to vehicles made from conventional steel. In freight made from weathering steel are dent resistant during loading and unloading resulting in high durability.

Art and architecture is one of the fast growing segments in the market owing to the rising demand for sculptures. Weathering steel is used in sculptures to gain the environmental advantage and to give an aesthetic finishing. Increasing awareness about art as an investment and not just a decorative piece is likely to create demand for sculptures. Few iconic sculptures, such as Angel of the North in Gateshead, U.K. and the Picasso sculpture in Chicago, U.S. are made using weathering steel.

Increasing demand for infrastructure in various parts of the world, such as US, Germany, Russia, China, and Japan is anticipated to augment the market growth over the forecast period. Europe was the largest segment accounted for a revenue share of 52.5% in 2018 as the product is well suitable in European environment. The region is dominated by Germany, in which nearly 190 infrastructure projects are ongoing with an investment of USD 129.6 billion as of 2018. Highway widening schemes in European countries is anticipated to boost the product demand. In U.K., the market is driven by the ongoing major road projects such as A14 upgrade between Cambridge and Huntingdon in England, M4 motorway upgrade in England, and A9 Perth-to-Inverness dualling project in Scotland.

Asia Pacific was the second largest region in 2018, owing to the rising construction activities. The infrastructure development in countries, such as China, Japan, and Australia is anticipated to augment the growth. According to the Asian Development Bank, the region needs USD 26 trillion in infrastructure investment by 2030. China's Belt and Road Initiative (BRI) to improve the road connectivity across six main corridors is considered as the key variable for the growth of the regional infrastructural development. The corridors include the New Eurasian Land Bridge, the China-Indochina Peninsula Corridor, the Bangladesh-China-India-Myanmar Corridor, the China-Central Asia-West Asia Corridor, the China-Mongolia-Russia Corridor, and the China-Pakistan Corridor. This is likely to augment the market growth in the forthcoming years. 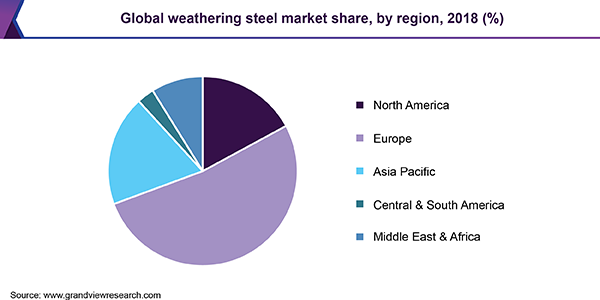 Middle East and Africa is anticipated to witness a CAGR of 4.5% in terms of volume from 2019 to 2025. The growth is attributed to the increasing number of projects on bridges and architecture especially in West Africa. The construction of new bridge over Volta River on the East Corridor road, which connects the Port of Tema, the largest commercial port in Ghana, and the Burkina Faso border is set to begin in 2020 after the government approved a loan agreement of nearly USD112.3 million from the Japanese government in 2016. The constructors announced to use weathering steel in the new bridge. Such projects are likely to positively influence the adoption of weathering steel in the region.

This report forecasts revenue and volume growth at global, regional, and country levels, and provides an analysis of the latest industry trends in each of the sub-segments from 2014 to 2025. For the purpose of this study, Grand View Research has segmented the global weathering steel market report on the basis of application and region: