The global western blotting market size was valued at USD 606.7 million in 2016 and is expected to show an attractive growth over the forecast period. Rising prevalence of HIV has led to huge demand for western blotting tests. According to CDC, as of 2016, around 36.7 million people were living with HIV across the globe. Western blot is always preferred over the enzyme-linked immunosorbent assay (ELISA) test for detecting HIV owing to its greater accuracy in detecting HIV antibodies in the patient’s blood. However, healthcare professionals prescribe ELISA at the first attempt to screen for HIV. But, western blot further helps in confirming the HIV infection in the patient’s body. Although this testing tool is much more complicated as compared to ELISA, it delivers more accurate and effective results in detecting HIV virus. According to LymeDisease.org, 52% of chronic diseases show negative results conducted by ELISA tests, however, the same are found to be positive by western blot.

Lyme disease is also detected through western blotting with greater sensitivity and specificity. According to CDC guidelines, 5 out of 10 bands generate positive test results for Lyme disease. However, western blot results significant bands, which helps in faster detection of Lyme disease among patients. This testing method is also used to examine mad cow disease, Hepatitis B infection, Herpes Type 2 infection and feline immunodeficiency in cats.

Furthermore, pharmaceutical and biotechnology companies are facilitating huge R&D spending which includes R&D activities requiring western blot tests. For instance, Roche spent nearly USD 8.0 billion in 2015 for its R&D activities. Small pharmaceutical companies use lower revenue share for operating activities, so that they can spent majority of them in R&D activities. According to Investopedia, this share even accounts for up to 50% for some companies. Hence, with growing R&D investments, the demand for these tests is also expected to accelerate in the near future.

Government funding for research initiatives is also increasing to a great extent in academic institutions through formation of industry-academic collaborations. This is also projected to heighten the growth of western blotting market in the coming years. Rising demand for personalized medicine is also expected to boost the growth of the market.

On the basis of products, the market is segmented into instruments and consumables. Consumables dominated the market in 2016 owing to rising prevalence of target diseases requiring western blotting for research and diagnosis. These products have widespread usage in western blotting techniques.

Instruments are expected to show significant growth over the forecast period due to the growing availability of automated instruments for conducting western blot, which helps in facilitating rapid diagnosis of chronic diseases.

On the basis of application, biomedical & biochemical research accounted for the largest market share in 2016. This is due to the rising number of R&D activities being conducted and increasing government funding in research related to proteomics

On the other hand, disease diagnostics segment is expected to show the highest growth over the forecast period due to increasing incidence and prevalence of target diseases such as HIV, Lyme disease, and Hepatitis B infection.

On the basis of end-use, academic and research institutes held the largest market share in 2016 due to large number of R&D activities conducted by academic institutes and research centers. These activities are also being increasingly supported by government funding, which is further boosting the revenue share of this segment.

Pharmaceutical and biotechnology companies are projected to witness attractive growth over the forecast period owing to rising R&D investments made by these companies with respect to drug discovery and development. 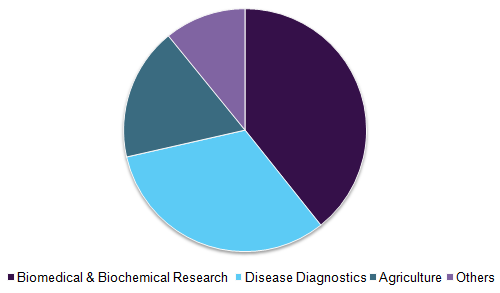 In 2015, North America dominated the market owing to growing usage of genetically modified crops in the U.S. Moreover, huge fund generation by the government in R&D activities in this region is also one of the significant factors driving the growth of western blotting market.

Asia Pacific is expected to show lucrative growth over the forecast period. This is due to rising prevalence of HIV in India and increasing R&D spending by the Indian government in the field of agriculture. Moreover, with growing biotechnology industry in Japan and China, there is an expected steady growth of the market in the region.

The major companies are focusing on new product launch, mergers, acquisitions, and regional expansions to cater to the needs of the target population. For instance, in September 2014, LI-COR Biosciences introduced two products for stripping and re-probing of western blots for the purpose of qualitative analysis.

This report forecasts revenue growth at global, regional, & country levels and provides an analysis on the latest trends and opportunities in each of the sub-segments from 2014 to 2025. For the purpose of this study, Grand View Research has segmented the global western blotting market on the basis of product, application, end-use, and region: