The global wetsuits market size was valued at over USD 800 million in 2014. 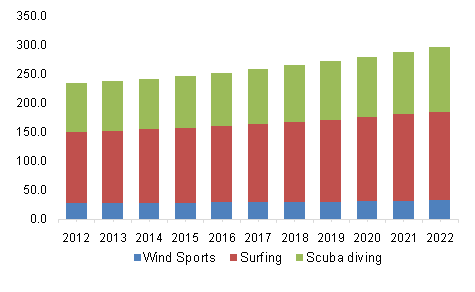 Surging income levels of general populace in select geographies and innovations in surfing and aligned product design & fabrication are expected to drive the industry growth. Growing emphasis on healthy lifestyles along with continuous efforts on striking a balance between leisure and work has accentuated the demand for outdoor sports activities.

Rise in water sports participation in South East Asia coupled with varied advances in technology is estimated to propel industry growth. The public image of triathlons has shifted from an extreme event for an eclectic, tiny minority to a more mainstream endurance sport, thus driving the demand for wetsuit apparel across the globe.

Prominent growth opportunities across untapped geographies, such as China and the Middle East, based on the rise in average disposable income of growing and large population are estimated to accentuate the demand by 2022.

Surfing wetsuit apparel, which accounted for over 45% of the overall market in 2014, is expected to remain the leading segment in the entire wetsuit apparel section over the next seven years.

Wetsuit apparels not only improve the experience for seasonal surfers, but also make the sport more convenient for global population. They are used year-round for surfing as it provides warmth to the surfer. Surfing wetsuit’s lifesaving capability, a benefit that goes far beyond the physical comfort, is envisioned to provide significant opportunities for industry growth over the forecast period.

With the proliferation of technology, innovative sports models, such as artificial waves and wave parks, are being developed, which are expected to offer favorable prospects for industry growth. Due to the amalgamation of inland geographic expansion of the surf industry with notable corporate sponsors, the industry is poised for considerable growth.

North America is expected to dominate the global wetsuits market and accounted for over 40% of the total revenue share in 2014, which can be attributed to triathlon events being organized and sponsored by companies such as Samsung. Novel technologies in artificial waves and wave parks are anticipated to boost the overall surfing and aligned industry. Windsurfing gears are anticipated boost the overall industry sales owing to the presence of Columbia River Gorge & Maui islands, famous as world windsurfing capital.

Asia Pacific is anticipated to surface as a profitable region for the wetsuit apparel industry. The growth of wetsuit apparel can be attributed to growing inclination towards water and wind based sports activities and events associated with them. Additionally, favorable government initiatives encouraging water based sports in countries such as China are expected to push the demand for wetsuit apparel.

Manufacturers have also innovated their marketing initiatives and have adopted contemporary distribution channels such as official online vendors and supplementary e-commerce retailers such as AliExpress, eBay, and Amazon apart from authorized physical brick & mortar stores.