The global wind turbine casting market size was valued at USD 1.84 billion in 2019 and is expected to expand at a compound annual growth rate (CAGR) of 5.4% from 2020 to 2025. The increasing requirement of electricity on account of rapid urbanization and industrialization is expected to drive the demand for renewable sources of energy such as the wind, which will stimulate the usage of turbines. A wind turbine is a device that aids in converting the kinetic energy of wind into usable power. Wind turbines have various parts, which include a main shaft, rotor hub, mainframe, rotor blades, gearbox, generators, tower, rotor bearing, power converter, transformer, nacelle housing, and cables among other. The primary parts that undergo casting include rotor hubs, axle pins, and main carriers. 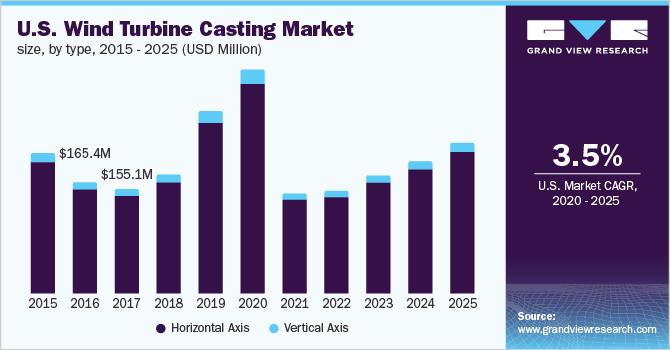 Rotor hubs are cast components in a wind turbine, and they are subjected to high stress. Casting aids in high creep resistance and are ideally suited for developing composite components. The growing wind energy installations in countries including China, India, Brazil, UK, and South Africa is expected to create favorable opportunities for market growth in the future.

The growing number of installations in offshore applications in countries, such as UK, Germany, China, Netherlands, Japan, and Denmark, is projected to drive market growth over the next nine years. Moreover, longer lifespan and lower maintenance cost of these products are expected to drive the market demand over the upcoming years.

The key drivers for the industry include favorable government policies to promote the usage of renewable sources of energy and the need for lowering carbon imprints and emissions. Rapid urbanization coupled with rising construction activities has increased the demand for electricity. This factor is anticipated to drive the requirement for wind energy, which in turn will propel the market growth.

Solar energy utilization has witnessed significant growth over the past few years as a renewable source of energy. Abundant availability of sun rays along with low prices of solar panels on account of mass production is expected to hinder growth over the upcoming years.

The growing demand for renewable energy is encouraging companies to harness the power from wind turbines and solar. Technology advancements in wind turbines along with various government tax incentives on wind turbine installation are anticipated to spur the demand for wind turbine castings. Global efforts combating climate change including the Paris Agreement, to reduce global warming are expected to substantially reduce the greenhouse gas emissions and the promote growth of the renewable energy market.

The increasing demand for wind turbines is anticipated to augment market growth over the coming years. This is attributable to various factors including depleting fossil fuel reserves, rising concerns on environmental pollution, and support from various governments to promote the growth of renewable energy. In addition, the global wind power capacity increased by 13% from 2020 to 2021 as per the data provided by the World Wind Energy Association in March 2022.

Components such as rotor hubs are subjected to high stress, thus, they undergo casting process to demonstrate high creep resistance and act as a load bearer. Wind turbines are designed to have a lifespan of 20 years and thus, the components require high fatigue strength. Large-volume, thin-walled cast parts are used to meet this requirement. In addition, each megawatt of wind capacity requires around 20 tons of castings, which contributes to about 5% of the turbine cost.

Declining prices of solar panels is likely to restrain the market growth over the coming years. Wind energy is more efficient than solar energy as it releases less carbon dioxide and produces more energy. The electricity generated by a single wind turbine is the same as the electricity generated by a thousand solar panels. However, solar energy has various advantages over wind energy such as it has no moving parts resulting in less risk to damage and no maintenance costs.

Wind turbine components such as mainframe and motor hubs are manufactured using ductile cast iron also known as spheroidal graphite. These components are prone to material defects caused due to dross that leads to crack formation, resulting in the reduction of the load-bearing capacity of the components. Dross is unavoidable during casting and the crack is usually found on the surface of the cast component or below the casting skin of the component.

Horizontal axis turbine was the most widely used type and accounted for 95.4% of the global revenue share in 2015. Horizontal axis types can be distinguished from their structures with electrical generators and main rotor shafts at the top of the tower. Primary advantages including high efficiency and power output are expected to stimulate product demand, which in turn will spur industry growth over the forecast period.

Vertical axis type turbines are projected to witness the fastest growth over the forecast period owing to their advantages such as operating at minimum wind speed, less number of components, and low maintenance costs. These products are currently in the initial phase and are expected to grow in light of various R&D activities.

The onshore application was the prominent segment contributing to 91.8% of the global revenue in 2015. Onshore applications refer to turbines located on the land and are expected to witness significant growth on account of easier installation and maintenance. Moreover, these products are more affordable, and electricity generation costs are lesser, which will create further growth opportunities. 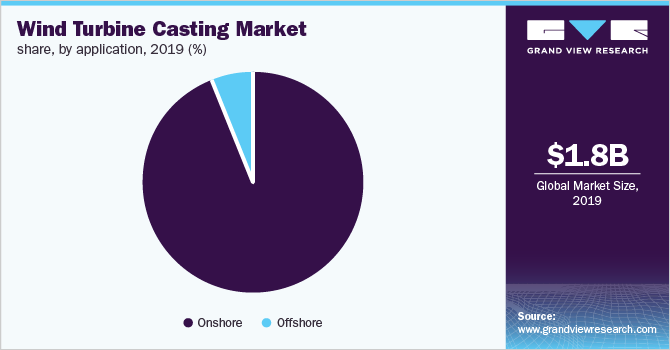 The offshore application is expected to witness the fastest gains on account of favorable government support and ambitious targets for development in countries such as China, South Korea, Japan, Taiwan, and the U.S. Onshore applications refer to turbines located on water bodies to generate electrical power. The application is still in a nascent stage of development and possesses enormous prospects as more amount of energy can be produced from fewer turbines. This is expected to open new opportunities for growth over the forecast period.

In terms of both revenue and volume, Asia Pacific held a substantially larger share in the global wind turbine casting market in 2021. This can be attributed to the presence of China and India in the region, which is among the largest wind power markets in the world. As per the WWEA, China was the largest country with 55.8 gigawatt installations in 2021, compared to 52 gigawatt installations in 2020.

New wind energy capacity additions in China are set to witness growth over the coming years on account of supportive government regulations. For instance, the full implementation of the Renewable Portfolio Standards (RPS) with quotas for local utilities, grid companies, and large corporates is expected to drive the wind power market in the country over the coming years. This, in turn, is likely to benefit the demand for wind turbine casting.

Germany is likely to remain one of the key consumers in Europe region. Renewable energy already covered the country’s power demand completely and the Germany’s government wants to increase the share of renewables in power consumption to an annual average of 65% by 2030. The sluggish growth of Germany’s solar power grid is likely to increase the reliance on wind power and other low-carbon sources. Thus, driving the demand for wind turbines in the country. 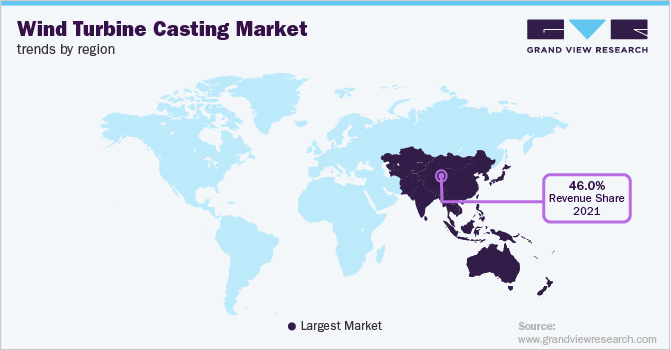 The growing demand for wind energy is encouraging wind turbine manufacturers to increase their production capacity and also to set up their own casting facilities to reduce costs and ensure timely delivery of components. For instance, in 2018, Siemens Gamesa, a wind turbine manufacturer along with Chromalloy Gas Turbine Corporation, an aircraft engine components manufacturer formed a joint venture named Advanced Airfoil Components. It was formed with an investment of USD 130 million to produce turbine blade and vane cast components for wind turbines.

The industry is highly fragmented in nature owing to the presence of various small, medium and large manufacturers. Large numbers of casting companies are present in the Europe, North America, and Asia Pacific region.

This report forecasts revenue growth at global, regional & country levels, and provides an analysis on the industry trends in each of the sub-segments from 2014 to 2025. For the purpose of this study, Grand View Research has segmented the global wind turbine casting market report on the basis of type, application, and region: 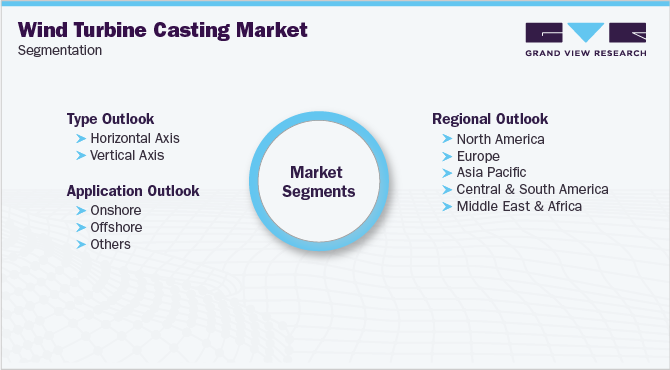