The global wind turbine operations and maintenance market size was valued at USD 8.08 billion in 2016 and is expected to witness a growth at a CAGR of 11.1% from 2017 to 2025. Repairing and maintenance of turbines is an integral part of the wind energy project. Efficient maintenance helps in reducing failure rate and thus avoids outage time at the time of event failure.

Favorable government policies and attractive incentives were implemented to develop a zero emission power system, which in turn fueled annual installation capacity over the past few tears. Countries including China, Germany, India, Japan, and France are focusing to reduce their dependency on fossil fuel-based power source.

Developed countries within Europe have been focusing on market based schemes such as competitive auction and feed-in-premium tariffs. China has been supporting the industry growth through implementation of favorable plans and policies such as mandatory purchase of renewable energy and Five Year Plan for Energy Transition.

These plans have boosted the wind energy consumption in China to reach 20% by 2030 and consequently fueled the installation of new turbines. Furthermore, Japan and India have adopted the feed-in-tariff policy to encourage investments in renewable energy projects.

Supportive policies and initiatives to reduce environmental impact propelled the renewable energy market significantly and thus resulted in a prolific growth in annual installation of turbines. Annual installation capacity globally increased to 63,634 MW in 2015 from 39,031 MW in 2010. As of 2016, turbines were installed in more than 80 countries worldwide, among which nine countries currently have a capacity of over 10 GW.

The market was largely driven by the unprecedented growth in turbine installation. However, stagnant growth in global electric consumption is expected to have a negative impact on the overall industry over the forecast period.

The energy industry was subjected to high costs for operations & maintenance, owing to optimistic estimation of reliability and lifetime of turbines. However, with robust growth in the wind energy market, industry players increased their focus on optimization of maintenance cost, through efficient tracking of failure statistics and other strategies.

Industry players have been focusing on the improvement of operations & maintenance activities required at project sites. Emphasis on reliable and cost-effective condition monitoring techniques has increased over the past few years. Numerous companies have been implementing cutting-edge technology to resolve failure issues.

Advanced tools are being designed to estimate long-term annual average costs and downtime of turbines. Such tools aid in identifying components that are on the verge of dysfunction and preventive measures are taken in advance to avoid unexpected failure.

The global wind turbine operations & maintenance market has been segmented into onshore and offshore. Onshore was the largest application segment in 2016, accounting for over 93% share of the global revenue. Offshore is anticipated to grow at a rapid pace, projected to expand at a CAGR of 15.2% from 2017 to 2025.

Europe was the largest player in the offshore market, with about 91% of installed capacity across the UK, Germany, Belgium, the Netherlands, Sweden, Finland, Ireland, and Norway. Numerous countries have been taking initiatives to increase their offshore capacity, owing to higher yield; for instance, deployment of larger turbines to reduce overall costs. 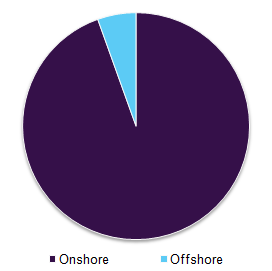 The U.S. started its first commercial offshore project in 2015. In addition, China and Japan have been focusing on increasing their offshore capacity. Furthermore, European countries such as the UK, Germany, Denmark, Belgium, France, and the Netherlands have approved numerous offshore projects, therefore projecting significant growth of the offshore segment during the forecast period.

Europe was the largest regional market accounting for around 39% of the overall industry revenues in 2015. The region dominated the offshore installation category, and also incurs high operations & maintenance costs. The UK has the highest offshore capacity, globally, with Germany, Spain, France, Italy, and Denmark being the other key contributors in Europe.

Asia Pacific is anticipated to be the leading player by 2025, accounting for over 43% of the overall revenues, owing to significant increase in annual installations in China. China accounted for the highest annual installation of 23 GW across the globe. Furthermore, the country is expected to push its offshore capacity, thereby positively impacting the industry growth.

Latin America and Middle East are projected to witness exceptional growth over the next few years. South Africa emerged as a key player in the wind energy market over the past few years and trend is expected to continue over the forecast period. The country has further planned to upscale its wind projects in the near future.

The key players in the market include Siemens Wind Power GmbH, Suzlon Group, GE Wind Turbine, Enercon GmbH, and Gamesa Corporation. These companies focus on extending their existing agreement with wind farms along with the establishment of new ones.

Various companies aim to improve life extension projects for turbines. Furthermore, they are emphasizing to shorten the maintenance interval period. The companies are strengthening technical capabilities to offer services at remote locations. Such initiatives by various companies are expected to have a positive impact on the industry growth over the forecast period.

This report forecasts volume and revenue growth at global, regional & country levels and provides an analysis on the industry trends in each of the sub-segments from 2014 to 2025. Grand View Research has segmented the wind turbine operations and maintenance market by application and region.