The global window covering market size was valued at USD 27.6 billion in 2018 and is expected to expand at a CAGR of 4.2% over the forecast period. Robust development in economies is likely to drive the market in the forecast period. Increasing disposable income of the consumer group has led to frequent changes in coverings with changing wall paints and other home décor items. This has also become a prominent factor to propel the market growth. 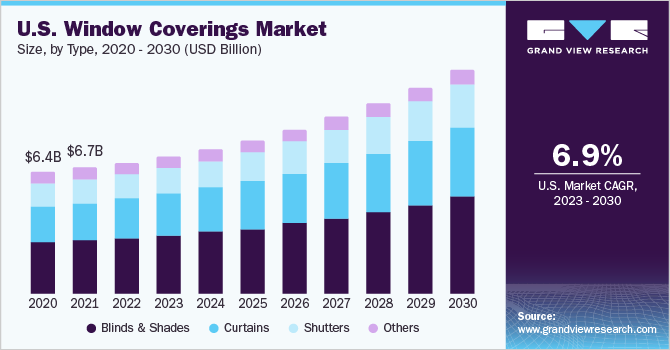 Furthermore, rapid urbanization has increased the number of households, which, in turn, will propel the market growth in the forecast period. For instance, it has been projected that the number of households in the U.S. will increase by 12.2 million between 2018 to 2028. This is expected to fuel the overall market growth for the coverings in the forecast period.

In developing countries such as India and China, the adoption of western culture has been the most prominent factor for the market growth in both the residential as well as commercial sectors. Adoption has led to a change in the purchasing behavior of the consumer. The trend of rental houses has also been a driving factor for the industry. Consumers prefer to change their coverings and other home decors with changing homes, thus increasing the demand for the product.

The growing hospitality industry has made a tremendous impact on the growth of the industry. In developing countries such as India and China, the industry has witnessed robust growth in recent times. An increasing number of startups such as Oyo rooms and Fab hotels has led to a rise in the sale of curtains in the last five years, thereby driving the demand for the coverings. In rural areas of countries such as India, the usage of coverings is found to be rare. Although, increasing urbanization in rural areas is likely to propel the market demand in the forecast period.

Increasing government initiatives in developing countries to build more houses has also been a considerable factor for industry growth. In India, the government has come up with an initiative called “affordable housing scheme”, under which a large number of houses have been built and the government is also providing home loans at nominal interest rates. These factors are expected to drive the market in the forecast period.

The offline segment dominated the market and accounted for 84.6% of the overall revenue. Consumers prefer to shop through different home décor outlets such as Home centre in order to have a large option with designs and colors. In countries such as India, consumers prefer to buy through various wholesale markets as they are much cheaper as compared to other markets. These factors are likely to drive the segment in the forecast period.

The online segment is expected to expand at a CAGR of 4.7% over the forecast period. Due to growing young consumers in the market, consumer preference has changed in the last few years. Due to their hectic work schedules, they prefer to shop online instead of going to the market. The segment is likely to witness tremendous growth in the forecast period due to the introduction of online retailers such as Amazon.com and other home décor specialty online retailers, who ensure faster delivery with a large variety of products.

Based on the application, the window covering market is further segmented into commercial and residential. The residential sector dominated the market and accounted for 55.8% share of the overall revenue in 2018. An increasing number of households and rapid urbanization in emerging economies such as India and China are the key factors driving the segment. The introduction of various schemes such as “Pradhan Mantri Awas Yojna” in countries such as India has led the lower-middle-class families to have their own house, thereby increasing the number of households. This, in turn, will boost the segment growth in the forecast period.

On the basis of product, the window covering market is segmented into blinds and shades, curtains, shutters, and other variants. The blinds and shades segment accounted for a leading share of 39.5% in 2018 and is expected to witness significant growth in the near future. Preference for blinds and shades is increasing in countries such as the U.S and other European countries due to technological advancements in the product. Manufacturers have come up with technologies such as remote control shades and automatic weather sensor shades, which has propelled the demand for the product in recent years. 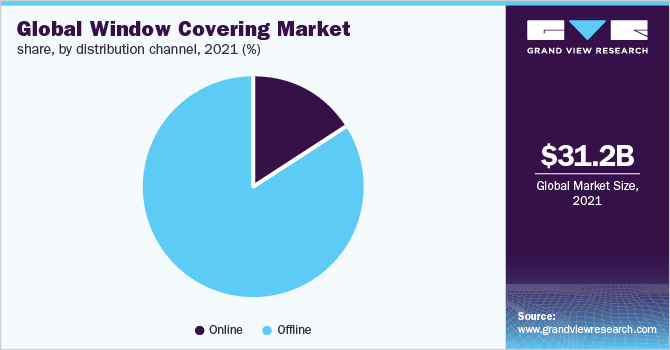 The curtains segment is expected to register a CAGR of 4.4% during the forecast period. Curtains being a traditional option for window covering, are widely popular among the economical consumer group. Innovation in designs and patterns by the manufacturers has fueled the market growth in recent times. Growing consumer preference for changing their curtains with changing shades of their homes has led to the frequent purchase of the product, thereby propelling the overall demand. They are cheaper and easy to use as compared to that of blinds and shades and thus are more popular among the consumer group. This, in turn, is encouraging the demand for the product in the forecast period.

In 2018, North America led the market with a share of 40.0% and is anticipated to witness significant growth in the near future. In North America, the U.S. contributes to the majority of share and is expected to register a CAGR of 3.8% over the forecast period. The introduction of different varieties of the product and technological advancements in the product has driven the market in the region.

Asia Pacific is expected to register the fastest CAGR of 5.1% over the forecast period. Rapid development in emerging economies such as India and China has driven the regional market. The growing tourism sector in countries such as Thailand and Malaysia has also been a considerable factor for the market growth as it has led to an increase in the number of hotels and resorts, thus propelling the demand for the product in the time frame.

Hunter Douglas, Lotusblind, Bombay Dyeing, Insolroll, Mariak, Welspun India Limited, Skandia Window Fashion, MechoShade Systems LLC, Lafayette Interior Fashion, and Comfortex Window Fashion are some of the major market players in the industry. The market presents moderate to low entry barriers due to the presence of leading market players as well as small firms. The market is further driven by innovation in designs, mergers and acquisitions, and joint ventures. For instance, various manufacturers have come up with technologies involved in blinds and shades that can be controlled by remote. They have also introduced automatic shades with weather sensors.

This report forecasts revenue growth at the global, regional, and country levels and provides an analysis of the latest industry trends in each of the sub-segments from 2015 to 2025. For the purpose of this study, Grand View Research has segmented the global window covering market report on the basis of type, application, distribution channel, and region:

How big is the window covering market?

What is the window covering market growth?

Which segment accounted for the largest window covering market share?

b. North America dominated the window covering market with a share of 39.9% in 2019. This is attributable to introduction of different varieties of the product, coupled with technological advancements, in the region.

Who are the key players in window covering market?

What are the factors driving the window covering market?

b. Key factors that are driving the market growth include increasing disposable incomes of different consumer groups, along with rising consumer expenditure on home furnishings & decor.