Early detection of any health issue with help of digital and mobile mammography, such as breast MRI, ultrasound, and bone density testing, is critical. Advancements in medical science offer lucrative opportunities to keep a check on women-centric conditions that include infectious diseases, osteoporosis, and breast cancer. This is estimated to work in favor of the market. According to data published by National Center for Biotechnology Information (NCBI), women are 30.0% more prone to be infected with HIV compared to men. 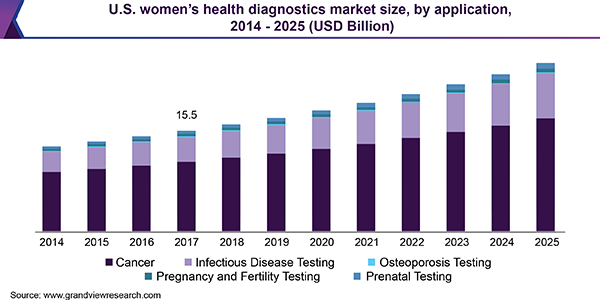 According to National Institutes of Health (NIH), 40.0% of women contract at least one UTI in their lifetime. It also states that women aged under 50 years are 30 times likelier than men to develop a UTI. In the U.S., women suffering from UTIs register 8.1 million visits to healthcare providers each year.

Furthermore, product launches, expansion, mergers & acquisitions, and certain government initiatives are projected to boost the growth of the market during the forecast period. For instance, in February 2014, Roche launched a fully automated CINtec PLUS cytology test, a new test for screening of cervical cancer that improves detection and early intervention of precancerous cervical disease.

The market, on the basis of application, has been segmented into cancer testing, infectious disease testing, osteoporosis testing, pregnancy & fertility testing, and prenatal testing. Cancer dominated the market in 2017 due to introduction of technologically advanced hybrid imaging instruments with enhanced accuracy. For instance, in July 2017, Quest Diagnostics acquired Med Fusion and Clear Point laboratories in Texas to expand its laboratory business for diagnosis of cancer among women.

Various collaborations among key players, governments, and other agencies to enhance accessibility of patients to diagnostics of various diseases are poised to bolster the growth of the market. For instance, in November 2017, BGI and Lunenfeld-Tanenbaum Research Institute signed a collaborative agreement to develop a genomics-based diagnostic test for early identification of women susceptible to preterm birth and other pregnancy complications.

Hospitals and diagnostics centers accounted for the largest share in the women’s health diagnostics market in 2017. The segment is expected to maintain its position in the market through 2025 as they are usually the first choice of patients to visit for detection of cancer, infectious diseases, and osteoporosis, among others.

The home segment is anticipated to observe lucrative growth during the forecast period owing to increasing investments by market players to commercialize portable and point of care devices. Furthermore, growing awareness about home diagnostic devices is estimated to spur the growth of the segment.

North America was at the forefront of the global market, with a share of a little over 40.0% in 2017. This can be attributed to high adoption of technologically advanced products, product launches, and government initiatives. For example, in September 2017, Philips launched new ultrasound innovative products, Philips EPIQ 7, EPIQ 5, and Affiniti 70 ultrasound systems, to ensure easier, earlier, and more reliable diagnosis. This launch is likely to help expand its foothold in this region. In the U.S., Home Access Health introduced a home testing kit, which can be used to obtain a sample and send it to a laboratory for testing for fast and effective diagnosis.

Asia Pacific is projected to be the fastest-growing region during the forecast period. Improving healthcare infrastructure, rising awareness about women’s health disorders, government initiatives, and increased participation of women in workforce are some of the factors poised to positively influence the growth of the regional market. 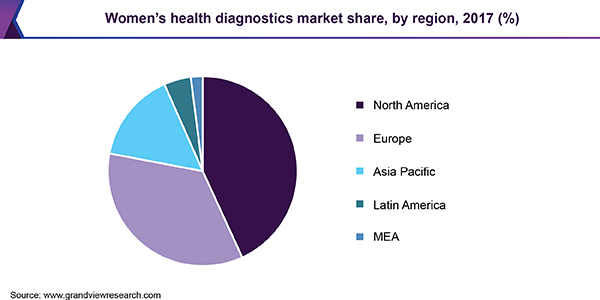 In November 2016, the Indian government launched Pradhan Mantri Surakshit Matritva Abhiyan (PMSMA) scheme to provide free health checkups to pregnant women. Under this scheme, women would be tested for anemia, high blood sugar (gestational diabetes), blood pressure, hormonal disorders, and have access to free ultrasounds to track health and development of baby in the womb.

Mergers & acquisitions, partnerships, and expansion of regional presence are among key strategies employed by market players to remain competitive. For instance, in September 2017, Quest Diagnostics acquired two hospitals of Hartford HealthCare (HHC), namely Hospital of Central Connecticut and William W. Backus Hospital to enhance its lab services. In June 2013, Hologic, Inc. entered into a strategic alliance with Quest Diagnostics to expand its product portfolio in the diagnostics segment of Aptima products for women’s health.

This report forecasts revenue growth at global, regional, & country levels and provides an analysis of industry trends in each of the sub segments from 2014 to 2025. For the purpose of this study, Grand View Research has segmented the global women’s health diagnostics market report on the basis of application, end use, and region: