The global deep learning market size was valued at USD 272.0 million in 2016. Increasing applicability in the autonomous vehicles and healthcare industries is expected to contribute to the industry growth significantly. This technology is gaining prominence on account of its complex data driven applications including voice and image recognition. It offers a huge investment opportunity as it can be leveraged over other technologies to overcome the challenges of high data volumes, high computing power, and improvement in data storage.

The rapid increase in the amount of data being generated in different end-use industries is expected to provide traction to the industry growth. Additionally, the increasing need for human and machine interaction is offering new growth avenues to solution providers for providing enhanced solutions and capabilities. However, the requirement of a large amount of data to train neural networks is expected to pose a challenge to the industry growth. 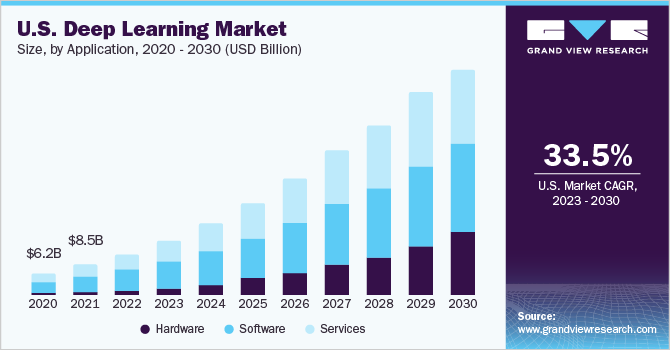 Organizations are investing profoundly to incorporate this technology into their product portfolio. In November 2016, SK Telecom announced that it had signed an agreement with Intel Corporation to develop the vehicle-to-everything (V2X) technology and video recognition based on deep learning. Moreover, government initiatives and increased spending are expected to bolster the industry growth over the next few years. For instance, China’s National Development and Reform Commission is funding the development of a deep learning research lab.

The software segment dominated the deep learning industry as the segment is undergoing radical transformations by transitioning toward Software as a Service (SaaS) powered by deep and machine learning. These solutions not only organize and aggregate the data but also mine the information to generate predictions and conclusions.

However, significant developments of algorithms and hardware are underway, thereby providing traction to the growth of chipsets. Their growing importance has led to the acquisition of both the hardware and software stacks for the development of field programmable gate array (FPGA) and Application-Specific Integrated Circuit (ASIC) to meet the customer demand.

The Graphics Processing Unit (GPU) dominated the hardware segment in 2016. GPUs offer a faster performance as compared to other chipsets. The growing need for enhanced visual content has led to an increased demand for GPUs in deep learning applications.

Increased R&D activities by prominent players developing the GPU chipsets are expected to impact the demand for GPU-enabled chips positively. For instance, Google announced its plan to launch GPU chips in early 2017 to its cloud machine learning and compute engine to enhance the performance of intensive computing tasks. GPUs are witnessing growth with the increasing prominence of neural networks to train the deep learning models.

Having just started making inroads into the deep learning domain, FPGAs accounted for a marginal revenue share in 2016 but are expected to witness considerable growth over the forecast period. This growth is attributed to the ability of FPGA to provide a higher performance per watt of power consumption as compared to GPUs. As the market for FPGAs is still in the nascent stage, it is expected to provide a huge potential to key players for developing them as a credible alternative.

The image recognition segment dominated the industry in 2016, capturing a revenue share of over 40%. One of the most widely used applications of this technology includes Facebook’s facial recognition feature. It is widely used to recognize patterns in unstructured data including sound, text, images, and videos.

Moreover, the widespread adoption of image recognition in the healthcare and defense verticals is expected to boost the industry growth over the next eight years. Industries such as automotive and financial services are gearing up for its adoption to improvise their operations and transform their offerings to create more value for business and customers.

The data mining segment accounted for over 5% market share in 2016. The need for data segmentation for identifying patterns and making meaningful predictions is expected to drive the segment growth. Data mining for decision making and other inferencing is revolutionizing the Big Data analytics segment. 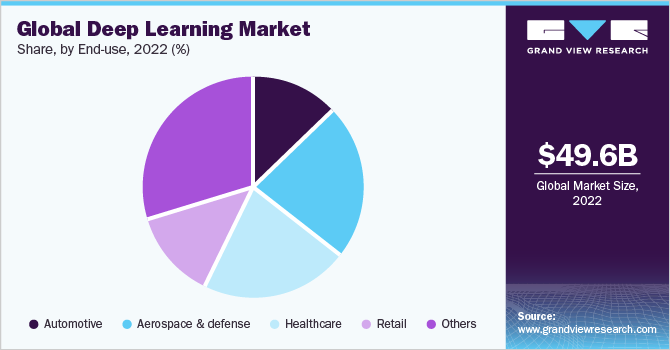 The aerospace and defense sector is leveraging the technology to challenge defense tasks across embedded platforms by processing large data sets. These solutions are used for image processing and data mining to foresee and evaluate future courses of action. For instance, the U.S. Department of Homeland Security used the technology to evaluate future events in its Synthetic Environment for Analysis and Simulations (SEAS) project.

The automotive industry accounted for a significant amount of revenue share due to the shift in vehicle operations from car ownership to individually-owned vehicles for sharing the driving experience. Automakers are realizing the implications of autonomous cars and are adopting this technology in their ecosystem. Audi utilizes the deep learning algorithms in its camera-based technology to recognize traffic signals by their characters and shapes.

North America dominated the deep learning market with a revenue share of over 45% in 2016, which is attributed to increased investments in artificial intelligence and neural networks. The high adoption of image and pattern recognition in the region is expected to open new growth opportunities over the forecast period. Moreover, the region is one of the early adopters of advanced technologies, rendering organizations to adopt deep learning capabilities at a faster pace.

Europe has contributed significantly to the industry growth as several new measures have been taken to support the artificial intelligence sector in the region to boost growth and deliver a digital economy. This, in turn, has offered considerable growth opportunities in the deep learning space. The UK is underpinning the technology to grow further in the areas of autonomous vehicles, smart devices, and cyber security.

Furthermore, companies are investing in building deep learning capabilities to incorporate the technology into their products. In November 2016, GE Healthcare announced a partnership with the University of California, San Francisco, to develop deep learning algorithms library to assist physicians in diagnosing and treating patients more effectively and accurately.

This report forecasts revenue growths at global, regional, and country levels and provides an analysis of the industry trends in each of the sub-segments from 2016 to 2025. For the purpose of this study, Grand View Research has segmented the global deep learning market based on solution, hardware, service, application, end use, and region.