The global women’s health market size was valued at USD 38.11 billion in 2021 and is expected to grow at a compound annual growth rate (CAGR) of 4.8% from 2022 to 2030. Market growth can be attributed to the increase in the women geriatric population and the introduction of new products for women’s health, such as Relugoliz and Orilissa among others. Furthermore, favorable policies initiated by governments to improve women’s health and raise awareness are likely to drive the market over the forecast period. The market exhibited lower than the expected growth during the pandemic. 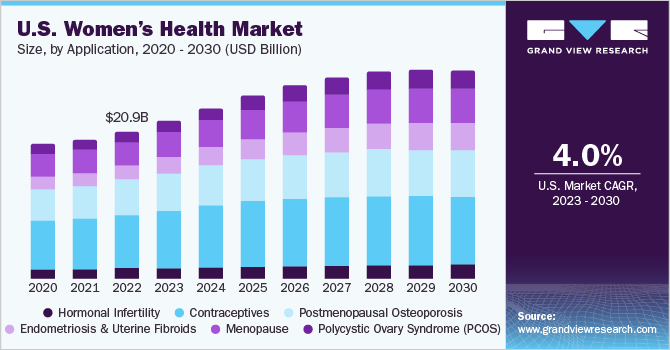 Access to contraception and gynecological testing declined, raising the rate of unsafe abortions and unwanted pregnancies, especially in developing countries. For instance, according to the BMC, in the low- and middle-income countries, there has been around a 10% decline in the use of long- and short-acting reversible contraceptives, about 10% decline in essential services related to pregnancy care. All these factors led to a decline in market growth amid the pandemic. Women are more susceptible to various diseases, such as osteoporosis, osteoarthritis, endometriosis, and menstrual health disorders.

Around 73% of postmenopausal women experience hot flashes, fatigue, and sleep disturbances, which increase dependence on medications, impairing the quality of life. With aging and the increasing prevalence of obesity, the cases of osteoporosis are anticipated to grow. Some of the major factors leading to hormonal imbalance in women are stress, change in dietary habits, and alcohol consumption, which further cause fertility issues. Polycystic Ovarian Syndrome (PCOS), ovulation problems, and endometriosis are some of the major causes of infertility. According to the WHO, in 2021, globally, around 190 million women of reproductive age were affected by endometriosis.

These factors are anticipated to fuel the market growth. According to the United Nations, the Department of Social and Economic Affairs, approximately 1.1 billion women needed family planning in 2019, out of which, 190 million had unmet contraception needs and about 842 million used modern methods of contraception. Owing to the high unmet need for publicly-funded contraceptive services and products, federal & state governments are actively working toward improving family planning services and improving access to modern contraceptives.

For instance, in 2020, Germany’s total multilateral funding for sexual & reproductive and family planning was around USD 121.85 million, an increase of about 65% from 2019. Furthermore, agencies, such as USAID run reproductive health & family planning programs in more than 30 countries, including South Africa & other African countries, where there is a high unmet need for contraception. However, there are various complications and adverse effects of prolonged use of contraceptives, which lead to an increase in the adoption of traditional contraceptive methods.

Long-term severe adverse effects of oral contraceptive pills, such as stroke, blood clots, decreased libido, vaginal discharge, and increased risk of breast cancer, may limit usage and lead to banning by regulatory agencies. Such factors could hamper the market growth during the forecast period.Few key products in the market are Xgeva, Evista, Prolia, Zometa, Mirena, Reclast/Aclasta, NuvaRing, Minastrin 24 Fe, Forteo, Actonel, Premarin, and Ortho Tri-Cy Lo (28). The market for NuvaRing declined by 3% in 2019 and 73% in 2020 primarily due to the introduction of generics following patent expiry in 2018 in the U.S.

Pills are the most common method of contraception used in developed regions, such as the U.S. and Europe, whereas in developing countries intrauterine devices and implants are most commonly used. The endometriosis & uterine fibroids segment is likely to grow at a significant CAGRduring the forecast period. The growth can be attributed to the launch of new products for these conditions. For instance, the approval of Orilissa in 2018 in the U.S., and the approval of Myfembree in the U.S. in May 2021 for the treatment of moderate to severe pain associated with uterine fibroids and heavy menstrual bleeding associated with uterine fibroids respectively is expected to drive market growth.

On the basis of age group, the global market has been further bifurcated into 50 years & above and others. The 50 years & above age segment is expected to register the fastest growth rate of more than 6.00% over the forecast period as an increase in life expectancy is boosting the overall menopausal population across the globe. In addition, with a rise in the geriatric population, diseases, such as postmenopausal osteoporosis are also increasing. All these factors are expected to drive the growth of this segment in the years to come. 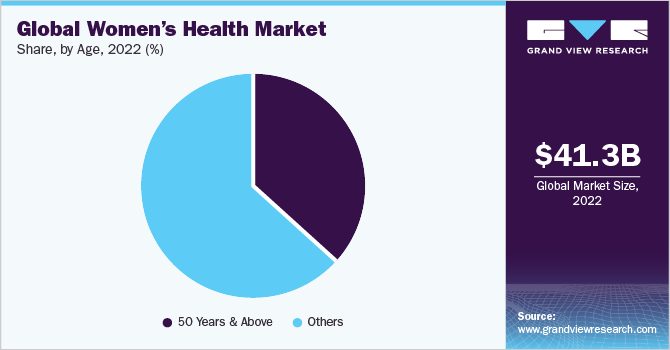 The others segment, on the other hand, accounted for the largest market share in 2021 and is estimated to retain the leading position during the forecast period. Women aged below 50 years are of reproductive age, and women’s health issues associated with this age group are more likely related to fertility, such as hormonal infertility, endometriosis, and polycystic ovary syndrome. According to the World Bank, in 2020, globally, around 64.8% of females were aged between 15 to 49 years, which is about 1.9 billion women out of 3.8 billion total female population. All these aforementioned factors boost the growth of the market.

North America dominated the overall market in 2021 and accounted for the maximum share of more than 41.00% of the global revenue. The region will expand further at a steady CAGR maintaining its market position over the forecast period. This growth was attributed to the early approval & commercialization of products, favorable reimbursement policies, supportive government regulations, and high awareness about the importance of maintaining good health. For instance, in the financial year 2020-2021, the Government of Canada provided USD 50.47 million for family planning due to which 2.5 million women and couples received contraceptive supplies and services.

Such initiatives and awareness campaigns will contribute to the market growth over the forecast period. Asia Pacific is expected to witness the fastest CAGR from 2022 to 2030 due to the factors, such as increasing awareness about women’s health and wellbeing, rising geriatric population, and various government initiatives for increasing health awareness. For instance, in July 2017, the Government of India increased its investment in family planning from US$ 2 billion to US$ 3 billion by 2020. In addition, as per the 2021-22 budget, the Australian government will invest USD 353.9 million over the next four years to support women’s health.

Key market players are adopting strategies that allow them to use resources to develop new products. For instance, in September 2020, Bayer acquired KaNDy Therapeutics Ltd. This acquisition was expected to expand Bayer’s women’s health drug development pipeline. New players, such as TherapeuticsMD, Inc. & Mithra Pharmaceuticals SA, are entering the market with innovative products, and major players are collaborating with small companies for new product development. For instance, Pfizer, Inc. collaborated with Myovant Sciences for the commercialization and development of Relugolix. Some of the key players in the global women’s health market include

This report forecasts revenue growth at the global, regional, and country levels and provides an analysis of the latest industry trends in each of the sub-segments from 2018 to 2030. For the purpose of this study, Grand View Research has segmented the global women’s health market report on the basis of application, age, and region:

How big is the womenâ€™s health market?

What is the womenâ€™s health market growth?

Which segment accounted for the largest womenâ€™s health market share?

b. The contraceptives segment accounted for the largest share of the womenâ€™s health market in 2020, due to the growing awareness regarding the usage of contraceptives, favorable reimbursement policies, and rising government and non-profit organization initiatives.

Who are the key players in the womenâ€™s health market?

What are the factors driving the womens health market?

b. An increase in the population of women aged over 60, a rise in unhealthy lifestyle habits, the introduction of novel medicines for women's health, and the impending approval of pipeline products are some of the factors that drive market growth.