High Prevalence Is Expected To Drive The Demand For Cancer Diagnostics

Cancer-related deaths are majorly associated with risk factors including excessive smoking, intake of tobacco, and exposure to environmental pollution and predispositions such as genetic mutations. According to the World Health Organization (WHO) in 2016, the number of commonly occurring new cases is on a significant rise. This is anticipated to further raise the high global prevalence level of oncology. Hence, its early diagnosis and prevention are of paramount importance.

The following chart depicts estimated cases of most common cancer types in 2016: 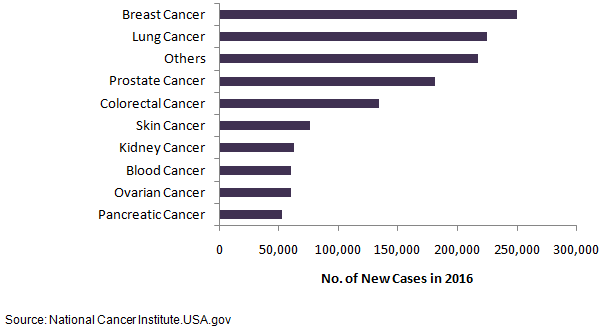 Laboratory tests, genetic tests, imaging, endoscopy, biopsy, and other tests like barium enema are used for the detection of a wide variety of cancer forms. Imaging is a widely accepted screening technique since it is quick, non-invasive, and pain free.

Presently, among the varied cancer forms, breast and lung cancer together account for over 50.0% revenue share generated by the sum total of the oncological screening tests performed. Whereas, rising tobacco and alcohol consumption is boosting the prevalence of liver tumor across the globe. As a result, demand for screening tests amongst patients suffering from liver tumor is expected to ascend.

Positive drivers of the market

Cancer is one of the main causes of rising mortality rate owing to the surging prevalence of the disease. As per data published by the WHO, 14 million cases were reported in 2012 and the number is expected to increase by 70.0% over the next 2 decades. One-third of the deaths stemming from tumors is largely due to late diagnosis and lack of on-time treatment. Thus, it is important to develop diagnostic systems that enable early diagnosis and effective screening of the disease.

With technological advancements, manually-operated instruments and equipment are increasingly being replaced with automated devices. The progressive devices, in addition to offering faster and accurate outcomes with automation, are compact, portable, and user friendly. Extensive research activities have resulted in the availability of laboratory assays, genetic tests, imaging systems, endoscopy, and biopsy procedures, which are highly efficient in detecting various tumor types.

Highly developed healthcare sector in the U.S. is fueling the adoption of advanced and efficient diagnostic systems. In addition, a well defined regulatory framework and the presence of giant players in the country are supporting the growth of diagnostics in the U.S.

Asia Pacific is expected to show the fastest growth during the forecast period. This is due to the rising rate of medical tourism in this region and increasing availability of facilities and treatments at comparatively more affordable prices. In addition, also the existence of a defined regulatory procedure conducive to the growth of this vertical is boosting the demand for diagnostics in this region.

Larger market potential is attracting many players to this sector. In their efforts to expand their portfolio with technically advanced products, existing players are investing heavily on research and development to remain competent in the market. Thus, the competition on a global scale is constantly intensifying.

Some of the major players operating in the market include but are not limited to GE Healthcare; Hoffmann-La Roche Ltd, and Abbott. Other sector participants comprise Becton Dickinson & Company; Koninklijke Philips N.V.; Illumina, Inc; Hologics.Inc; and Siemens Healthcare  GmbH.