Increasing Popularity Of Convenience Products In Emerging Economies Including China, India, And Mexico Is Expected To Drive The Food Container Market

New product launches including frozen bread and soup noodles by the food & beverage industry participants on a global level are expected to increase the importance of packaging activity. Furthermore, regulatory support aimed at promoting investments in the nutrition industry of China and India is projected to have a positive impact on the food container market over the next nine years.

The increasing importance of flexible packaging in the food & beverage industry on account of being a light weight material and the ease of disposal is anticipated to be a key trend. Furthermore, the growing importance of sustainable packaging items in light of regulatory inclination to reduce the consumption of synthetically derived raw materials in the U.S. is expected to promote the use of naturally derived biodegradable polymers as feedstock.

Rising awareness towards the consumption of nutritional products in the U.S. and Germany on account of extensive brand campaigns by sports nutrition product manufacturers is projected to increase the packaging requirements over the upcoming years.

Furthermore, the growing number of retail outlets and supermarkets in emerging countries including China, India, and Mexico as a result of rising disposable income is projected to increase the demand for food containers over the forecast period. Food containers find high usage in various applications including processed meat items, dairy derivatives and baked items as it increases the shelf life of the product. 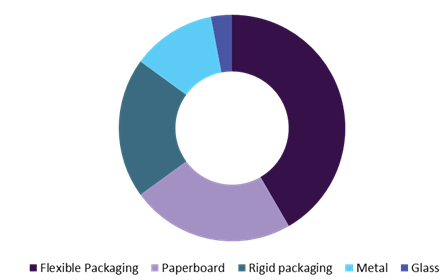 The increasing population in South Asian countries including India and Pakistan is expected to upscale the requirement for staple food items such as bread, roti and naan. This trend is projected to force bakery manufacturers to offer the abovementioned products in frozen packaged forms over the next nine years.

Over the past few years, Eastern European countries including Poland and Turkey have been witnessing an increasing convenience food consumption on account of population growth and rising levels of disposable income. In December 2011, the government of Turkey implemented the ISPAT Investment Promotion Strategy which is intended for enhancing the manufacturing output on a domestic level. The abovementioned strategy is expected to play a significant role in opening new market avenues over the next nine years.

Over the past few years, majority of manufacturers operating in the food & beverage packaging sector have been opting for divestment strategy. In January 2012, Bemis Company Inc. announced the closure of four manufacturing plants located in Minnesota (U.S.), Le Trait (France), Monterrey (Mexico), and Curitiba (Brazil).