Ionic liquids are special molten salts in the liquid state with high melting point. The properties of ionic liquids are low combustibility, chemically and thermally stable, volatility and good solvating properties. These liquids have the ability to act as solvent and catalyst to speed up performance in industries. For some applications, ionic liquids offer the advantage of both homogeneous and heterogeneous catalysts. Ionic liquids market is anticipated to grow significantly owing to its potential of effective replacement to industry solvents.

The application of ionic liquids in catalysis may be designed to suit the requirement of yields and selectivity which vary according to the batch of ionic liquids. However, there is an impact of containment which includes halides, and this contamination may vary from a different batch of these liquids used in catalysis. 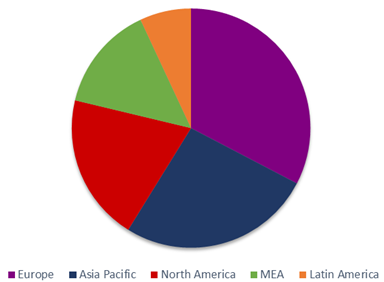 Surging demand from the end-use applications due to the environmental sustainability of ionic liquids as green solvents is expected to augment the demand for the product. The demand for these liquids is on the rise owing to its varied use in applications such as solvents & catalysts, extractions & separations, and bio-refineries. This, in turn, has led to increased spending by manufacturers to provide value added benefits to consumers.

Rising norms by governments for environmental friendly solvents over the past decade have led to the increased spending by the application industry globally to improve the properties of ionic liquids. This, in turn, has led to increased spending by the ionic liquid manufacturers in the region on improving the product quality and grade, which is likely to drive the demand for the product over the forecast period.

Positive outlook towards the solvents & catalysis application in U.S, Canada, Mexico, Germany and UK owing to government policies to open opportunities for investments by foreign players, to improve the economic conditions, is expected to drive the industry subsequently.

The global industry is fragmented in nature owing to the presence of numerous manufacturers with a global as well as regional presence. BASF SE, Evonik Industries, Merck KGAA, Solvay S.A., and The Chemours Company. These companies manufacture ionic liquids catering to different applications such as solvents & catalysts, extractions & separations, bio-refineries, energy storage, others.