The global ionic liquids market was valued at USD 20.36 million in 2015 of which the solvents & catalysis market was over USD 6 million. The market is expected to grow significantly over the forecast period on account of increasing use of the ionic liquids as industrial solvents. Rising environmental focusing on green chemistry is anticipated to drive the demand for the product as a green solvent.

Ionic liquids are widely used in applications such as solvents & catalysts. Also, rising demand from the extractions & separations application is further expected to drive the industry over the forecast period. 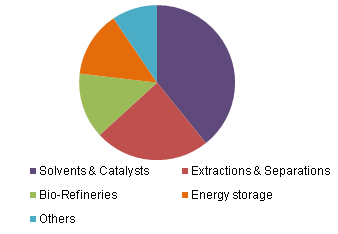 Surging environmental awareness regarding green solvents is also likely to fuel the growth over the forecast period. The growing product production in the North American region owing to growing demand from various applications coupled with advanced production facilities is expected to drive the industry over the next nine years.

Rising government spending on environmental compliance in North America and Europe on account of increasing domestic output of industrial solvents is expected to play a significant role in amplifying bio-refineries and energy storage activities in these regions. In 2015, North America contributed to over 30% of the total global ionic liquids market. Also, the development of new processes for manufacturing of these liquids in North America is likely to boost ionic liquids industry growth.

Positive outlook towards the solvents & catalysis application in the U.S., Canada, Mexico, Germany, and the U.K. owing to government policies to open opportunities for investments by foreign players, to improve the economic conditions, is expected to drive the demand for the industry subsequently. The volatile raw material prices and complexity of manufacturing processes add to the cost of the final product. This, in turn, is expected to have an adverse impact on the ionic liquids industry over the forecast period.

Solvents and catalysis were the largest application of ionic liquids accounting for over 35% of the global value in 2015, as they help in as precursors for any chemical reaction. Extraction and separation are especially prevalent in the countries of the European region such as Germany, and the UK. Also, upcoming projects for increasing petrochemicals output in the U.S., Canada, and Mexico are expected to impact demand positively. 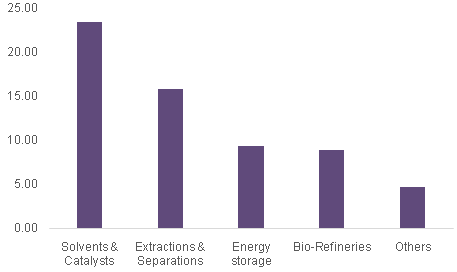 Extraction and separation accounted for the second-largest share in 2015 and is anticipated to grow at a CAGR of over 10% from 2016 to 2025. There is a rise in the demand for bio-ionic liquid application in refineries and energy storage, which provide an environmentally friendly alternative to industrial solvents and is likely to propel the growth over the forecast period.

North America was the largest market for ionic liquids accounting for more than 30% of the revenue in 2015. The presence of numerous prominent mining companies in the U.S, owing to the presence of government support is expected to play a crucial role in increasing demand for the product. Also, the prevalence of numerous regional players in the region in the U.S. and Canada will fuel the product growth. 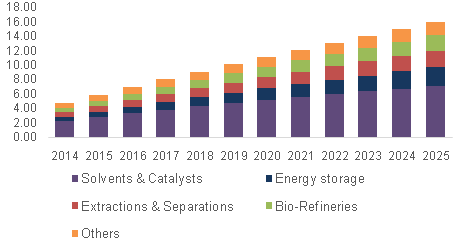 The U.S. is expected to lead the North America market owing to government initiatives related to environmental compliance.

The global industry is fragmented in nature owing to the presence of numerous manufacturers with a global as well as regional presence. BASF SE, Evonik Industries, Merck KGAA, Solvay S.A., and The Chemours Company. These companies manufacture ionic liquids catering to different applications such as solvents & catalysts, extractions & separations, bio-refineries, energy storage, others.

Grand View Research has segmented the global ionic liquids market on the basis of application, and region: