Window films, at the time of introduction, were nothing but “a sticky plastic”. With the evolution of technology and rising awareness regarding benefits of these films, the market has galloped to new heights. The intricate and demanding technologies used in the manufacturing process has led to the innovation of high quality and performance window films.

These films have penetrated into the construction industry at a brisk pace with widespread application scope including reduction of solar heat gain, improving safety & security, adding aesthetic appeal, and reduce fading. Global warming due to carbon dioxide emissions coupled with rising energy costs is the major issue being faced by governments and environment agencies across the globe.

Sun-control films have revolutionized commercial construction sector, with the majority of offices, malls and retail stores opting for them for thermal comfort. Commercial spaces, specifically offices suffer due to the problem of overheating in summer. Window films have embarked on the scenario by reducing solar energy transmitted by glazing before it enters the building. This is effective in maintaining workplace room temperatures, reduce solar heat gain and the rate of temperature change. 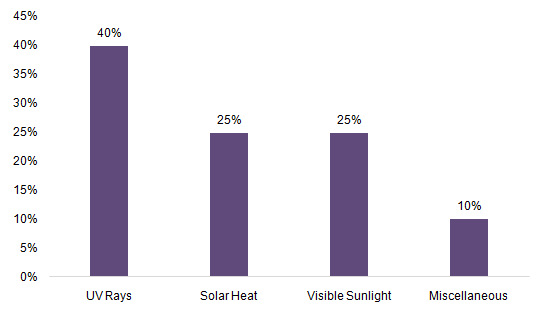 Governments in the developed regions such as North America and Europe have passed legislations pertaining to energy efficiency in buildings. In the U.S., windows account for 25% of the energy consumed by a typical, with buildings accounting for 40% of all energy used.

The window film industry worked with California Energy Commission in 2011, to re-write the rules for the usage of energy saving products like window films in existing buildings. The goal was set to include window films included in California energy codes proposed in 2013, and particularly a piece of legislation, AB 758.

Over the last decade, the glass industry has marshaled its size, investments, and impact to favor their products in the energy saving codes to stay in competition with products such as window films. However, window films have held an upper hand, as they are inexpensive and do not require any structural change.

In response to rising awareness of energy-saving along with the need for improving the living environment near windows, the applications of transparent heat ray blocking films that can be affixed to window glass have been proposed. The development of optical functional films by combining technologies of optical multilayered membrane design, precision coating, and elongated sputtering, as well as material technology, will provide new growth avenues and prospects to capitalize in future.