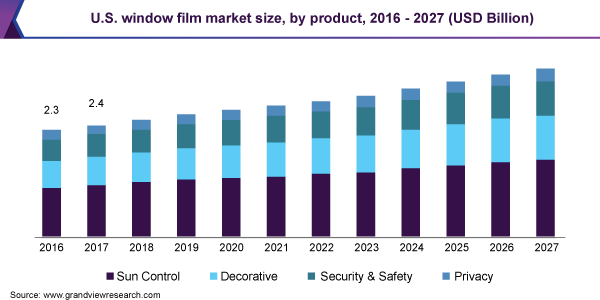 The commercial segment emerged as the fastest-growing application segment. The booming construction sector in developing regions is expected to augment demand for the product. Increasing demand for films in commercial and residential applications is expected to spur market growth over the forecast period. Moreover, increasing tinting activities on existing windows, coupled with stringent regulations on developing green buildings, are expected to drive product demand in residential applications in the coming years.

In addition, the product is used in living rooms and bedrooms to maintain privacy, without hampering the outdoor view. This eliminates the extra cost of heavy traditional decorative glasses and offers exclusive security as well as aesthetic appeal.

Decorative window film is expected to witness the fastest growth over the forecast period as it enhances the look of the window with an exciting design. It helps to reduce energy costs, eliminate window glare, prevent the fading of carpets and furniture, and add aesthetic values to the buildings. They are widely used in residential and commercial applications, including conference rooms, offices, curtain wall glass, hallways, and stairways.

Safety and security window films protect from natural disasters, such as storms, earthquakes, explosions, and vandalism. It helps to hold the glass fragment together at the time of natural calamities. Increasing violence, along with the ongoing threat of terrorism in some parts of the world, is expected to fuel the demand for security and safety window film.

The automotive application segment accounted for the largest revenue share of 36.0% in 2019. This is attributed to the growing trend towards the manufacturing of lightweight vehicle components owing to the stringent environmental regulations issued by the government to promote fuel economy, thereby increasing demand for window films.

Safety and security window films are used in automotive applications to avoid damages caused by flying shards. Window films provide protection from UV rays and superior heat control. Recovery of the automobile sector in European countries, such as Germany, France, and Italy, on account of electric vehicles, is expected to positively impact the demand for window film over the forecast period.

Increasing investments to develop affordable housing schemes in emerging economies of the Asia Pacific and Latin America are expected to drive demand for window film in residential applications. Investments to modernize the country’s aging infrastructure and renewable energy sector, along with the growing population, will generate demand for residential buildings. 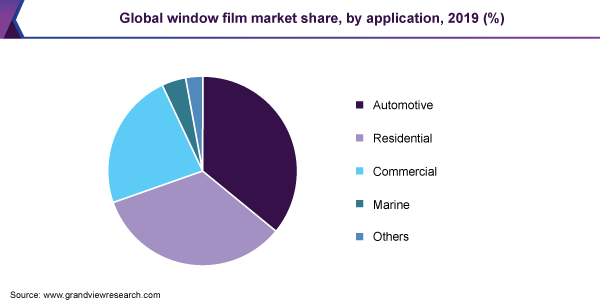 Window film offers a cooler cabin environment, reduces glare during the day time, and does not reduce visibility at night time, and increases fuel efficiency. It also reduces the harmful UV rays and fading protection to the interior and exterior components. The global marine industry is expected to witness high growth opportunities in Brazil and Russia. This factor would drive window film demand in marine applications.

North America accounted for the largest revenue share of 32.8% in 2019 and is expected to maintain its lead over the forecast period. This is attributed to new investments being made in the region, reflecting a recovery in Canada's residential and non-residential construction, owing to capital expenditure cuts in the oil and gas sector and the Liberal government's fiscal stimulus plan to spur new non-residential construction. Furthermore, given the expected rate hikes by the Federal Reserve, an increase in long-term interest rates is likely to remain gradual.

According to the World Health Organization (WHO), the epicenter of the pandemic has shifted to Europe owing to which countries, such as the U.K., Italy, and Germany, have been severely impacted. The demand for window films in various applications has dropped considerably. After the lockdown is lifted, the halted construction projects will resume, which, in turn, is expected to drive the demand for window films in the region.

The Asia Pacific is expected to witness the fastest growth over the forecast period. The construction industry in the Asia Pacific is expanding at a rapid rate owing to growing urbanization, especially in emerging economies, such as China, India, Indonesia, Vietnam, among other Southeast Asian countries. Exponential population growth in these countries, coupled with a high demand for affordable housing and government schemes promoting basic amenities, such as food and shelter, is expected to drive the market.

The market is largely dominated by several multinationals. The companies in the market compete on the basis of the product quality offered and the technology used for the production of window films. Major players compete on the basis of differentiated technology and application development capabilities. Established players such as Eastman Chemical Company are focusing on expanding their production capacities to meet the ascending product demand.

For instance, in January 2020, Eastman Chemical Company announced the expansion of production capacity at Dresden, Germany, manufacturing facility to cater to the growing demand for coatings and laminating lines used in films. This capacity expansion is intended to cater to the growing demand for paint protection films and window films. Furthermore, in February 2019, Toray Plastics (America), Inc. announced the expansion in a polypropylene film line. This initiative expanded and automated the production capabilities of the company in order to meet the rising consumer demand. Key players operating in the global window film market include:

This report forecasts revenue and volume growth at the global, regional, and country levels and provides an analysis of the latest industry trends and opportunities in each of the sub-segments from 2016 to 2027. For the purpose of this study, Grand View Research has segmented the global window film market report on the basis of product, application, and region:

How big is the window film market?

What is the window film market growth?

Which segment accounted for the largest window film market share?

b. North America dominated the window film market with a share of 32.83% in 2019. This is attributable to increasing demand for product across multiple end-use industries such as residential, commercial, automotive, and marine in the region.

Who are the key players in window film market?

What are the factors driving the window film market?

b. Key factors that are driving the market growth include window films application to reduce glare and protection against UV rays and enhance the strength and rigidity of windows in various industries such as automotive and construction.