“Safety & security don’t just happen; they are the result of collective consensus and public investment. We owe our children, the most vulnerable citizens in our society, a life free of violence and fear.”- Nelson Mandela

Security is the most important aspect for the stability needed by the country to continue on its development path. To ensure it, proactive steps are being taken by the countries all over. Recent threats to national security or security to the mankind as a whole has been modernized as well, with the coming of modern tech-savvy age. Unmanned Aerial Vehicle (UAVs) are the newest edition to the threat list.

UAVs aka Drones are getting popular for all the wrong reasons nowadays. Although, it was developed and produced extensively by keeping its multi-dimensional utility in mind, it is becoming more of a nuisance and threat to the national security. To counter this, countries are investing highly in the research and development of anti-drone facilities. Due to this and many other reasons, Anti-Drone market is expected to grow leaps & bounds in the period of 2019-2025, from its valued size of USD 576.7 million in 2018.

Why a jump from Drones to Anti-Drones?

Drones have been developed by tech developers and researchers to facilitate the controlled reach of humans to the places out of bound for them. It had several utilities from military usage to quick parcel deliveries among others. However, nowadays due to uncontrolled proliferation of UAVs, several smaller ones have invaded airspace, resulting into a nuisance.

Drones have fallen into wrong hands, leading to a risk of being used for contraband smuggling, nefarious terrorist activities and illegal spying and recce by adversaries. To top it all, it poses serious threat to the aerospace infrastructure and passenger aircrafts while landing and taking off process. It becomes a distraction as well as has potential to ground a complete aircraft by interfering with the turbines. This makes it a matter of airport safety. Along with this, during natural disasters these UAVs are used by hobbyists and media organizations to take aerial photographs and video footages of the affected areas. This activity proves to be a hindrance in the emergency rescue operations.

Apart from this, air-defense capabilities of the forces consist of fighter aircrafts and radars, which are rendered ineffective due to the small size of the drones used in the aforementioned activities. Therefore, Anti-Drone systems become the need of the hour to cope with these threats to the national security.

Counter UAV measures deployed in military & defense end-use utilize RF signal manipulation strategy to take over and disrupt or damage the drone as soon as it enters a pre-defined exclusion zone. This technology enables the security agencies to detect, identify, categorize, track, and take control of the UAV by manipulating the radio wireless communication protocols operating in the ISM band. Moreover, increasing efforts are being made to develop an anti-drone technology utilizing a combination of video, audio, RF, and Wi-Fi sensors to identify unlawful drones in the vicinity.

Market is categorized on the basis of region, mitigation type and defense type. Regionally, North America is set to dominate the market in the period of 2019-2025. USA is investing heavily in R&D of anti-drone systems as well as it is testing several systems on the airports to counter the unwanted UAVs and maintain the safety standards. Apart from North America, Asia-Pacific is expected to clock high growth rate due to boost from countries like China and India. 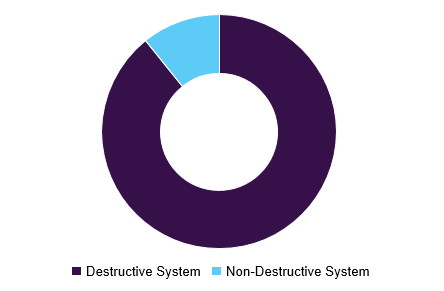 When it comes to categorization of the market based on Defense type, it is bifurcated into Detection and Detection & Disruption segments. Among these segments, Detection & Disruption segment is expected to be the highest revenue-generating segment. These systems involve various techniques for the detection and identification of drones, including the reflectance of a particular photon, radar reflectance, acoustic and electromagnetic emissions, and induced magnetic field. Above mentioned systems are witnessing an increasing demand owing to the rising number of security breach incidents across the globe. Key counter-drone technology providers and system manufacturers are offering a wide range of professional equipment for drone detection, tracking, and identification in order to cater to this rising demand. Equipment include several perimeter detection and surveillance radars, RF spectrum analyzers, video and infrared systems, and acoustic sensors.

Key players in the market have undertaken several developments in the anti-drone technology.