The global Anti-drone market was valued at USD 1.1 billion in 2021 and is anticipated to register a CAGR of 28.3% from 2022 to 2030, based on a recent report by Grand View Research, Inc. There has been a drastic increase in unmanned aerial vehicles (UAVs) for commercial and recreational use worldwide. This has resulted in a dramatic rise in incidents of public safety violations and significant government infrastructure. The discovery and identification of these drones have been a substantial factor in security conservation, thereby accelerating anti-drone market growth. Drones with integrated cameras have opened up opportunistic routes for professionals looking for a way to capture aerial photographs. However, the increasing acceptance of these unmanned aerial vehicles has led to increased government safety concerns. This in turn, is fuelling the growth of the market. 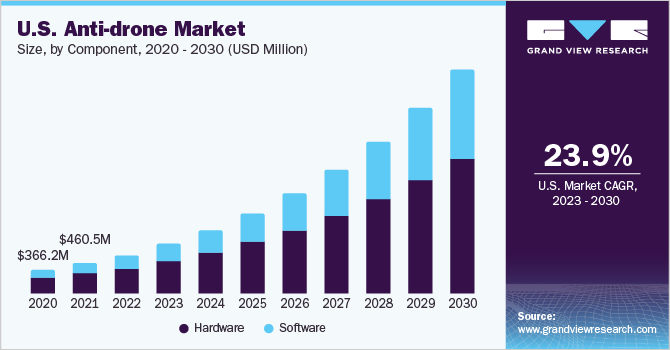 The increased use of these unauthorized flying test devices in the backyard and windows has increased threats to national security worldwide. These aircraft systems have a variety of sensors that can record video and audio regardless of time and place. To combat them, manufacturers are increasingly developing new UAV reduction technology limiting drones in aviation.

Prominent international government officials such as the federal aviation administration (FAA) in the U.S. support the development and marketing of advanced drone acquisition and mapping technology, as they provide accurate tracking and advanced detection and anti-chase and direction finding(DF) capabilities.

The companies significantly increase their production capacity to meet the growing demand for anti-drone programs while continuing to support market growth. Governments often use missiles and standby air force fighters as part of air defense. However, fighter jets and missiles appear to be less effective in the face of threats from small drones and unmanned aerial vehicles (UAVs).

To address such threats, governments and companies worldwide are increasingly investing in the development and marketing of counter-drone technology. Manufacturers incorporate different types of techniques for drone detection into their anti-drone systems to improve their overall performance.

Different systems rely on different strategies for detecting these flight systems. Unique techniques of drone detection and diagnostic methods include radio-frequency (RF) detection, infrared radiation (IR), electro-optical (EO) detection, and radar-based (RB) detection. RF jamming is the most popular way to prevent drones from moving in unauthorized air. Jamming disrupts the radio link between the system function and system, leading to its suspension. The adoption of such technology is expected to augment market growth during the forecasted period.

The outbreak and spread of COVID-19 have adversely affected the market. Considering the inputs from various industries that fall under the different categories of providers of the anti-drone value chain, OEM, end-users, and distributors, the size of the anti-drone market has declined to a great extent. This is due to the customer service restrictions. Furthermore, due to COVID 19, the market has seen small purchases of anti-drone systems from regions like Europe, the Middle East and Africa.

Demand for drone systems and technologies are expected to increase post-COVID-19 era. Governments strengthen their defensive capabilities to address uncertain political conflicts such as the India-China stand or conflict in the South China Sea. 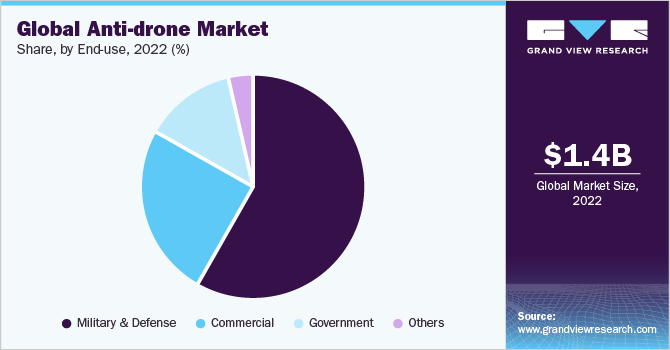 These systems destroy essential parts of the drone airframe through force, causing it to crash to the ground. In addition, some low-power lasers are intended to destroy electro-optical (EO) sensors located in the target area, thus disrupting UAV operation.

The electronic countermeasure segment is predicted to grow at a CAGR of 31.2% from 2022 to 2030. Drones are emerging and small in size due to advances in technology and drone technology. Therefore, there has been a steady increase in the use of small drones over the years. Therefore, several companies work in production. Compact counter-drones will improve the market size of anti-drone throughout the forecast period.

The detection and disruption segment captured the largest revenue share of 68.0% in 2021. This segment is likely to dominate the anti-drone market throughout the forecast period. The detection and disruption defense measure is used primarily to identify, classify and detect UAV’s. After the identification, classification, and detection, the UAVs can undergo neutralization to counter the unauthorized drones.

The step for countering a potential attack is by equipping monitoring apparatuses which not only distinguishes drones from other aerial objects like airplanes and birds but also can identify the type and model for drone to alert security and deploy countermeasures.

The detection system segment is predicted to grow at a CAGR of 29.3% from 2022 to 2030. The detection systems include various techniques for detecting and identifying drones, including radar reflectance, the emergence of a particular photon, and resulting magnetic field, as well as the acoustic and electromagnetic emissions. These programs reflect growing demand due to the increasing number of security breaches worldwide.

The military and defense segment captured the largest revenue share of 58.5% in 2021, and this segment is likely to dominate the Anti-drone market throughout the forecast period. The sharp rise in illegal and terrorist activities worldwide, such as unlawful smuggling and border crossings, is expected to further adoption of anti-UAV programs between the international security forces. Increased costs in R&D by leading defense contractors, coupled with augmented use of anti-drone programs by various military forces to protect the invaders, are the factors expected to play a significant role in the growth of the military and defense segment.

The commercial segment is predicted to grow at a CAGR of 31.9% from 2022 to 2030. The growing demand for counter-UAV technology in various commercial areas, including airports, prisons, live events, and critical infrastructure, is expected to allow the adoption of such programs in all of these areas. Many busy airports worldwide are increasingly using a variety of air defense systems to protect their commercial trade aircraft from dangerous collisions with unauthorised flying objects like drones.

The cost of upgrading anti-drone systems is very high. Parts used in these systems, such as laser, radar, and advanced electrical appliances, are expensive, and hence it is difficult for the producers to reduce the overall cost of the system. Due to the high cost, these systems are not able to be used for the commercial applications such as public and home spaces, which affect the demand for them.

The North America segment accounted for the largest revenue share of 45.3% in 2021. This segment is likely to dominate the Anti-drone market during the forecast period. The aviation and defense sector, particularly in the U.S., is observing an increase in the adoption of drone technology. The Federal Aviation Administration (FAA) of the U.S. has been testing different UAS technologies at various airports during the past few years; hence demand for the product is growing.

In addition, the U.S. Army, along with other members of the North Atlantic Treaty Organization (NATO), was using these programs in war-torn areas of Syria and Afghanistan, leading to an increase in product sales across the region.

Asia Pacific is expected to grow at a CAGR of 32.1% from 2022 to 2030. This growth can be attributed to an increase in funding from the government for the development of aviation and defense infrastructure in different countries, majorly China and India. Numerous institutions and companies across the region, including China National Nuclear Corporation, the Beijing Institute of Technology, and Nova Sky, are forming partnerships to focus on R&D to counter UAS technology, which enhances regional market size.

In addition, Asia Pacific is a region with major political conflicts; hence countries in the region constantly try to keep their security systems and forces up to date. For instance, China has a political dispute with India plus its many bordering nations, and hence the nation has started to strengthen its forces and defense infrastructure.

The anti-drone market is going through rapid changes. There is a surge of new entries in the market, increasing market competition. There has also been an increase in local players within the market, providing different types of drone combat solutions. For instance, in August 2021, Meteksan Defense, a Turkish company, introduced an improvised version of its counter-drone system Kapan at IDEF 2021.

The system has introduced the latest version of Retinar FAR-AD radar for Drone Detection with a new design to detect vehicles. This system supports small/virtual aircraft (UAVs). It is equipped with highly efficient computer systems, and other algorithms, backed by artificial intelligence. These events are expected to benefit the industry and stakeholders during the forecast period.

Many companies are now focusing on developing counter-drone technology to be used in the global military, which can secure long-term contracts and help companies expand their market share during the coming years. With the growth in investment in new products and rising demand from the trade and defense sectors, the anti-drone market is making huge profits. This would be the reason to offer new opportunities for the current and new players in the future. Some of the major players in the global anti-drone market include:

This report forecasts revenue growth at global, regional, and country levels and provides an analysis of the latest industry trends in each of the sub-segments from 2018 to 2030. For this study, Grand View Research has segmented the global Anti-drone Market report based on the mitigation type, defense type, end use and region:

How big is the anti drone market?

What is the anti drone market growth?

Which segment accounted for the largest anti drone market share?

b. North America dominated the anti-drone market with a share of 44.5% in 2021. This is attributable to the aerospace and defense sector, especially in U.S., which is witnessing a growing adoption of anti-drone systems and technologies.

Who are the key players in anti drone market?

What are the factors driving the anti drone market?

b. Key factors that are driving the anti-drone market growth include a significant rise in the adoption of unmanned aerial vehicles (UAVs) for commercial and recreational applications and an increase in the number of security breach incidents in public places and critical government infrastructure.