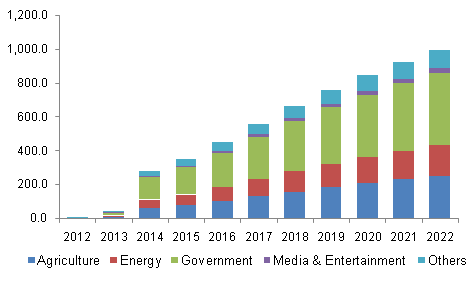 These aerial vehicles find applications in diverse industry verticals, which include homeland security, military, retail, and agriculture. The demand is considerably high for defense and military applications, although commercial applications are poised to gain popularity.

Retailing and e-commerce industries are working on making deliveries in the shortest possible time using GPS programmed drones. In 2015, Amazon Inc. recommended the allocation of dedicated airspace to the concerned authorities for the operation of these advanced delivery UAVs to deliver goods to the customers. However, such initiatives are only held back by government regulations, particularly in the U.S., and are set to make a positive impact on the industry once approved.

Governments are using such remote-controlled drones in several applications such as security and surveillance, law enforcement, scientific research and R&D, infrastructure, disaster management, and environmental studies.

Aviation regulatory bodies such as the European Aviation Safety Agency (EASA) and the Federal Aviation Administration (FAA) have banned the use of commercially used drones keeping in view the safety of the citizens and the difficulties in managing such massive air traffic.

However, the FAA has proposed a new set of rules for the use of such drones that allows flyers to fly them during the day if they weigh up to 55 pounds, fly less than 100 mph, and stay below 500 feet in the air.

Commercial UAVs have a wide range of applications in several industry sectors. Tech giants such as Google, Inc. and Facebook, Inc. are in developing solar-powered drones that hover around the earth providing internet access to the remotest of places acting as flying internet hotspots.

Government applications constituted over 40% of the global revenue in 2013, which can be attributed to increased use of drones in law enforcement, security, and surveillance activities.

Agricultural applications are expected to witness substantial growth over the forecast period owing to increased utility of UAVs in crop management by clicking photographs of fields and endowing farmers with decisive information related to soil and crops.

Other applications such as data collection activities for monitoring and mapping, disaster management, hyperspectral imaging, atmospheric monitoring, soil moisture imaging, and aerosol source determinations are also expected to be greatly benefited by UAVs.

Rotary blade type UAVs contributed to over 75% of the global revenue in 2013 on account of their ability to traverse several directions as well as hover in a particular position which makes them ideal for a vast array of applications.

Multi-rotor aerial vehicles have more than two or more and up to eight rotors with simpler rotor mechanics for easier flight control enabling them to be used for aerial photography and surveillance.

High demand in topographic surveys, aerial mapping, and terrain modeling of larger areas is expected to keep the market for fixed-wing UAVs buoyant.

Increasing government initiatives and building retrofits have encouraged users across the Asia Pacific region to use such drones for various applications as a result of which the market is expected to gain traction in the region. Australia, along with Asian countries such as Japan, has focused on the use of UAVs for agricultural purposes.

Vertical integration and technology licensing are expected to be commonly adopted strategies by industry participants. Manufacturers resort to mergers and acquisitions as their key growth strategy to make their presence felt in the industry. Increased funding, technological association, and partnerships with technology giants and government agencies are expected to emerge as critical success factors for industry growth.