Buddha is quoted as saying that “Change is the only constant thing in life” and everybody knows that a growling engine of change in modern age is - Technology. It has the potential to build upon existing systems or completely overthrow redundant tech and substitute them with a modern efficient technology. Biotechnology is one of the shining examples of this phenomenon and will continue to be so until a long time.

What Exactly is Biotechnology?

‘Biotechnology’ is the broad area of biology, involving living systems and organisms and deals with biological processing of those living organisms & systems to develop new technologies. It also exploits cellular & biomolecular processes to create new products & technologies. This leads to improvement in the health of consumers and the planet boosting the growth of Biotechnology market. Along with many things, it also deals with Tissue engineering, DNA sequencing and Nanobiotechnology. 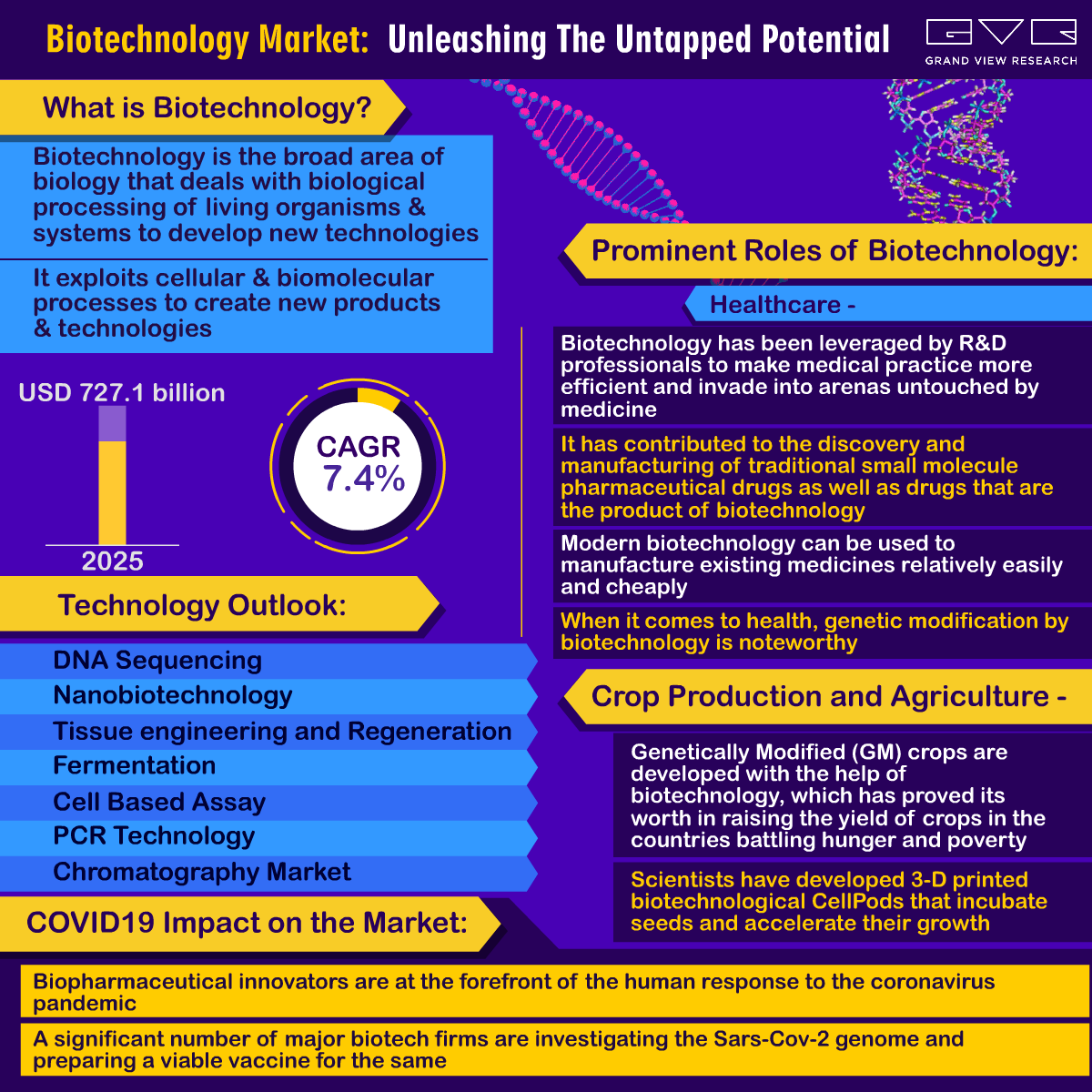 For example, one application of biotechnology is the directed use of microorganisms for the manufacture of organic products (examples include beer and milk products). Another example is using naturally present bacteria by the mining industry in bioleaching. Biotechnology is also used to recycle, treat waste, clean-up sites contaminated by industrial activities (bioremediation), and also to produce biological weapons.

Biotechnology is rooted in the science of microbiology, genetics, animal cell culture, embryology, cell biology, etc. The technology provides breakthroughs, developments, and products in biofuels, agricultural biotechnology, regenerative medicines, vaccines, and so on.

Its role in following sectors is quite prominent.

When it comes to health, genetic modification by biotechnology is also something to be highlighted. It has been applied in modifying the genetic structure of Mosquitoes (GM), resulting in the increase of capability to fight the outbreaks of harmful vector-borne diseases like Zika, Dengue and Malaria etc.

Nowadays to alleviate the problems of growing plastic waste, Biotechnology is also being leveraged to develop biodegradable plastics. This provides a huge push to the climate change initiative.

How is the market faring?

The global biotechnology market size is expected to reach USD 727.1 billion by 2025, at a CAGR of 7.4%. This shows the amount of potential this market has in the current time. The key players in the markets are putting pedal to the metal and investing heavily to cater to the growing need of biotechnological demands.

Key players are Johnson & Johnson Services, Inc., F. Hoffmann-La Roche Ltd, Pfizer, Merck & Co., and Sanofi among others. Mergers, collaborations, and manufacturing activities are the key strategies adopted by them to gain shares.