Fiber optic connectors are used for terminating the end of an optical fiber, which as we all know, are an important telecommunication medium, while also being a necessity for computer networking. For this reason, they have witnessed significant deployment in the high bandwidth communication technology, and other associated network broadcast & telecom technologies that drive modern day media & connectivity segment. When compared to splicing, optical fiber connectors offer quicker connection and disconnection. The demand for fiber optic connectors is a subsequent result of growing adoption of fiber optic technology.

Starting out from the Deutsch 1000, which is thought to be the first fiber optic connector that was commercially successful, to the advent of ceramic ferrule in the mid-1980s in Japan, they have come a long way. Fiber optic connectors have a multitude of applications. They are used in telephone exchanges and outside plant applications for connecting cables and equipment. Signal losses due to presence of air gaps between the joined fibers is also absent in these connectors, as they are spring-loaded, and therefore the fiber faces press together on mating the connectors. If the connectors are used for outside plant applications, protective enclosures need to be used, which fall into 2 categories: hermetic and free-breathing.

Besides these fiber optic connectors, there are several others such as the EC, LX-5, MIC, MU, SMC and V-PIN, all of which find varied uses in the telecom sector. Also, new ones such as the Senko CS and SN connectors have been introduced recently. A good connector should display properties such as low insertion loss, high return loss, ease of installation, low cost, reliability, ease of use and low environmental sensitivity.

Some of the fiber optic connectors that have become obsolete include Deutsche 1000, SMA, the Biconic, NEC D4, AMP Optimate, the MT-RJ, and Volition by 3M, among others.

How Are They Tested?

Testing generally falls into 2 categories: field testing and factory testing. The factory testing may use a profiling system to ensure the correctness of the overall polished shape of the fiber optic connectors, while a good quality optical microscope is used to observe blemishes. Field testing involves the use of a special hand-held optical microscope for checking dirt and blemishes, as well as certain other tests to determine various parameters.

Growing In Every Aspect!

The fiber optics technology is witnessing significant growth at present, and this has presented the fiber optic connector market an opportunity to leave a lasting impression. Some of the driving market factors include: 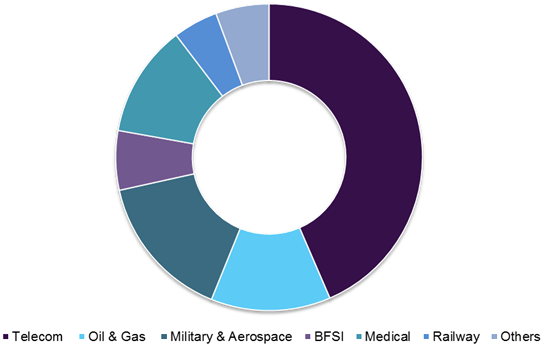 The presence of key industry participants globally, such as Corning, Inc., Optical Cable Corporation, Sterlite Technologies Limited, 3M, and OFS Fitel, LLC, have resulted in an increased demand for fiber optic connectors. These market players are making huge investments in R&D activities, as well as mergers and acquisitions to undermine the competition.

Some of the major developments that the fiber optic connectors industry has seen in recent years include: