The global 1-decene market size exceeded USD 850 million in 2015. Increasing demand for synthetic lubricants, capacity expansions by key industry players, and focus on the development of alpha olefins from bio-based materials are likely to propel the industry demand. The increasing popularity of synthetic lubricants, as they offer better lubrication and cause less engine wear & tear has triggered poly alpha olefin demand over the recent past. Polyalphaolefin is prepared by oligomerization of linear alpha olefins and C-10 is the most preferred alpha olefin for PAO production. Increasing PAO demand for producing engine/gear oils, greases, and other lubricants is expected to be the key factor driving the 1-decene industry. 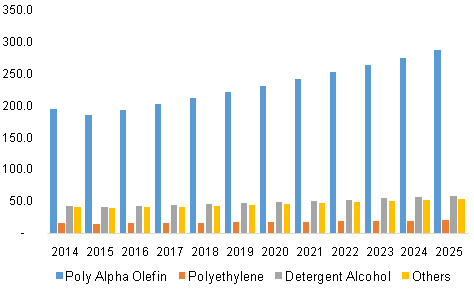 Shale gas boom, particularly in the U.S. and China, has provided new hope for petrochemical producers and has pushed ethylene production, which is an essential raw material for 1-decene production. Ample availability of critical raw materials in these regions is also expected to have a positive influence on product demand.

1-Decene is obtained through oligomerization of ethylene and can only be produced through full range alpha olefin distribution, which cannot be obtained through on purpose production processes like 1-hexene or 1-octene. This has led to limited C-10 supply for PAO production.

Short-supply of PAO in the market has left synthetic lubricant manufacturers with no choice other than to seek alternate raw materials for oil production. Ester-based synthetic oils are thus getting popular and are likely to affect 1-decene market growth over the forecast period.

The global industry has always been highly sensitive to the economic conditions along with supply demand scenario. The 1-decene market price is normally based on cost plus pricing method, in which raw material prices play an important part. Ethylene prices have been fluctuating in the past and the same trend can be observed in case of alpha olefin prices as well.

"Poly alpha olefin (PAO) was the leading application segment in 2015"

Detergent alcohols and their derivatives are key raw materials used for producing surfactants in laundry and dishwashing applications. This application segment is expected to witness above average growth rate over the forecast period.

The Asia Pacific region is estimated to be the fastest-growing region over the forecast period owing to increasing PAO and synthetic lubricant production in the area. Regional growth can also be attributed to the easy availability of raw materials. Rising demand for polyethylene in emerging economies of China and India is expected to augment the product demand further. The region is projected to grow at an estimated CAGR of 6.2% over the forecast period from 2016 to 2025.

Europe emerged as the largest consumer for 1-decene and is expected to maintain its dominance over the forecast period as well. Higher demand can be attributed to high demand for PAO for synthetic lubricant production in the region. Europe is followed by North America. The U.S. being the largest oil manufacturing country, has been responsible for the higher penetration in the area.

Major companies involved in alpha olefin manufacturing include Shell Chemicals, Chevron Phillips, INEOS, Qatar Chemicals, SASOL, and ExxonMobil. The 1-decene industry is concentrated within few multinational players having their patented technology. Shell Chemicals is the largest player with the top three companies holding over 75% of the market.

The market has witnessed a high level of integration from major industry participants. Key members, such as Shell Chemicals, Chevron Phillips, Q-Chem, Sasol, etc., have integrated their operations across the value chain including production and supply of raw materials to end-use products.

How big is the 1-decene market?

What is the 1-decene market growth?

Which segment accounted for the largest 1-decene market share?

b. Europe dominated the 1-decene market with a share of 46.8% in 2019. This is attributable to high demand of PAO for synthetic lubricant production in the region.

Who are the key players in 1-decene market?

b. Some key players operating in the 1-decene market include Shell Chemicals, Chevron Phillips, INEOS, Qatar Chemicals, SASOL, and ExxonMobil.

What are the factors driving the 1-decene market?

b. Key factors that are driving the market growth include increasing demand for synthetic lubricants, capacity expansions by key industry players and focus on the development of alpha olefins from bio-based materials.