The global 4K TV market size was estimated at USD 71.9 billion in 2016. Increased global production capacities and constant pressure for price reduction exerted by the retailers are the primary reasons for a steep decline in Ultra High Definition (UHD) TV prices over the last few years. This reduction in prices is expected to further fuel the demand for 4K television in the coming years. Over the last decade, technological advancements have remarkably altered television-sizes and their resolutions. UHD, which is a new term in the television industry has four times higher resolution as compared to the conventional High Definition (HD) resolution. Nowadays, consumers are purchasing ultra-high-definition TVs for the immersive visual experience, and since, the prices are declining, the demand is anticipated to grow exponentially in the coming years.

Major television broadcasters and content producers are making huge investments in UHD technology. They are aiming to offer better UHD content to a wide range of customers. Moreover, professional filmmakers are shifting toward UHD resolutions by using ultra-high definition camcorders and cameras. These trends are also expected to fuel the growth of the market.

Further, owing to the crystal clear and sharp viewing experience, ultra-high-definition televisions are projected to be adopted in numerous applications beyond the home entertainment industry. A few of the potential applications are telepresence & telemedicine and military intelligence gathering & monitoring.

The market in China is estimated at more than USD 20 billion in 2016 and is dominated by the 52-65 inches’ screen size segment. The presence of competitive players and a large number of production plants are the major reasons behind the huge market share of China in the global market.

Moreover, since, China has been selected to hold the 2022 Beijing Winter Olympics, major companies such as Huawei, Changhong and Sumavision have started investing in the development of UHD broadcasting equipment. These anticipated investments are also expected to change digital broadcasting from HD to UHD broadcasting and drive the demand in China.

Televisions in the size range segment 52 - 65 inches’ emerged as a dominating category and accounted for over 40% of the overall revenue share in 2016. However, the above 65 inches’ segment is projected to witness the highest growth, owing to the rapid introduction of innovative technologies such as Quantum dot LEDs (QLEDs) and Super Ultra High Definition (SUHD). 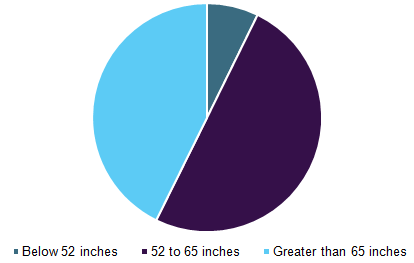 The market is infused with a wide range of televisions under different price ranges. Manufacturers are increasingly reconsidering their designs to introduce innovative 4K TVs. They are heavily investing in R&D activities to develop advanced graphic engines that enable an immersive viewing experience.

The increased purchasing power of the customers has further fueled the demand for 4K TV especially in the 52 - 65 inches segment. Thus, manufacturers are offering a higher number of 4K TVs in the 52 - 65 inches segment. However, the increasing rates of disposable incomes around the world along with decreasing price trend of UHD televisions are also expected to drive the growth in the above 65 inches’ screen size segment.

Asia Pacific held the largest share in 2016, as China has transformed into the biggest consumer of 4K TVs, accounting for more than 70% of the global share in the same year. The mass availability of 4K TVs coupled with low price offerings is the major reason behind the huge consumption of 4K TVs in the country.

North America being an early adopter witnessed significant growth with the introduction of 4K TVs, a trend expected to continue over the forecast period. Further, the regional 4K TV (Television) market growth is also attributed to the growing adoption of 4K set-top boxes that allow exploiting the full capability of 4K TVs with improved picture quality.

The region is expected to witness tremendous growth also owing to a drop in prices of 4K TVs, and it is anticipated that by 2025 more than half the American population will own at least one 4K TV. The European 4K TV market also exhibited moderate growth due to increasing demand in the UK and Germany. The proliferation of TVs supporting HDR will be a key factor expected to drive the growth in developed markets.

The industry is highly competitive due to the presence of several dominant players, such as Samsung, LG Electronics, Inc., Sony Corporation, Vu Technologies Pvt. Ltd., and Sharp Corporation, among others. The presence of the above-mentioned companies has intensified industry rivalry. Furthermore, increased customer preferences for well-known brands have restricted the new entrants in the market.

The key market players offer a broad range of televisions with different screen sizes and features to increase their sales. Furthermore, they are striving to gain a competitive edge by offering Ultra High Definition televisions with new technologies such as OLED and QLED displays.

This report forecasts revenue growth at global, regional, and country levels and provides an analysis of the industry trends in each of the sub-segments from 2014 to 2025. For the purpose of this study, Grand View Research has segmented the global 4K TV market based on screen size and regions: