The global acetic acid market was valued at USD 20.6 billion in 2021 and is anticipated to witness a compound annual growth rate (CAGR) of 4.9% from 2022 to 2030. The growth is attributed to its importance in building blocks for manufacturing several chemicals and usability in various industries such as plastic, rubber, ink, and textile. The rising growth in end-use industries including plastic, textiles, and chemicals across the globe is expected to drive demand for the product over the forecast years. On top of that, the substitution of PET bottles with glass bottles for alcoholic beverages is anticipated to drive demand for terephthalic acid, thereby positively impacting the product industry over the forecast years. Additionally, with the presence of multinational players and their constant initiatives for expansion and joint venturing pertaining to the product are likely to boost the market growth during the predicted years. 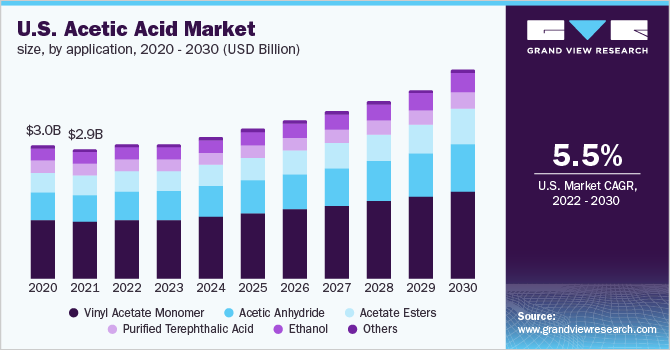 The product is considered safe for utilization in foods if it is utilized in a manner that is consistent with excellent manufacturing practices, and in “food-grade”. If it meets the requirements of the food chemicals codex, it is considered "food-grade.". Owing to the increasing demand for food and its safe nature, the product is anticipated to see significant growth over the forecast year.

The global acetic acid market is highly competitive owing to the presence of multiple multinational corporations that are involved in extensive research and development activities and are open to take initiatives for its expansion, collaborations, and joint venturing to gain a competitive edge. Thus, the impact of competitive rivalry is expected to remain high in the acetic acid market over the forecast period.

The COVID-19 outbreak crippled numerous economies and severely impacted the supply chain across industries. The production and consumption of the product are highly dependent on its demand from end-use industries. Hence, inconsistency in demand for end-use industries is anticipated to directly impact the demand for the product. Owing to the negative impact of the pandemic the market witnessed the shutdown of chemical industries across the globe, which are the major end-users of the product. However, the market started to give positive signs in the second half of 2020 with the relaxation of cross-border trade restrictions and the re-opening of various industries globally. 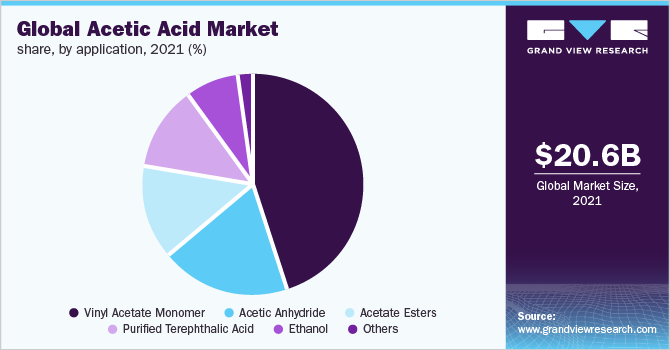 Acetic anhydride captured the second largest share globally in 2021 with a share of about 19%. This growth is attributed to its extensive utilization in photographic films and various other coated materials. It is also used for the manufacturing of cigarette filters. It is considered a key raw material for the development of medicines such as aspirin, which helps in the treatment of headaches. Acetic acid is used extensively in the preservation of wood.

Acetate esters are developed from acetic acid and are majorly utilized in paint and coatings, and printing inks manufacturing. Increased desires of consumers to elevate the aesthetics of their houses are influencing global demand for paint and coatings. The automotive industry is also fueling the demand for paints owing to increased sales of vehicles. This is directly impacting the demand for acetate esters worldwide.

The ester of ethanol and acetic acid forms ethyl acetate, which is widely used as a diluent and a solvent. It is a highly demanded chemical due to its less toxicity and low cost. Ethyl acetate produced by ethanol is used in paints and perfumes that evaporate quickly and leave a fragrance on the skin.

The Asia Pacific dominated the market with a revenue share of 48.8% in 2021. This growth is attributed to the increasing demand for acetic acid in various industries such as construction, pharmaceuticals, automotive, and textiles. The growth in demand for the product is accounted by the development of the region’s pharmaceuticals industry. Acetic acid is majorly used in the development of medicines. The increased dependencies of consumers over medicinal tablets are likely to drive the overall demand for the product in the region.

Asia Pacific was a major contributor to the global vinyl acetate monomer market in 2020. Furthermore, the growing building and construction industries, particularly in India and China, are likely to become a major contributor to the region’s market over the forecast period. The improved pharmaceutical industry and the increased demand for medicines in countries like Saudi Arabia, Qatar, the U.A.E., and Bahrain are anticipated to have a positive impact on the demand for the acetic acid market in the Middle East and Africa. The presence of a large number of patients suffering from diabetes, cardiovascular disease, and ailments related to the aging population. The rising life expectancy is increasing the demand for acetic acid in the pharmaceutical industry in the region. 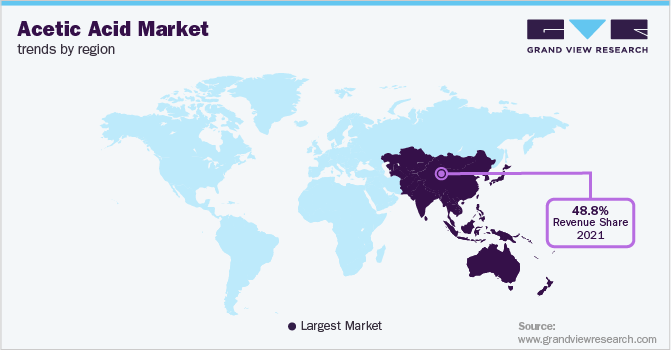 The market has become highly competitive in the presence of multiple multinational players. These companies are taking several initiatives for expansion and collaborations to improve their product portfolio and quality. Companies like Celanese Corporation, SABIC, HELM AG, and Indian Oil Corporation are some of the key players in the market. The market players are extensively investing in research and development and constantly innovating to enhance their production efficiency and product quality. The success of these companies in the market is obtained by continuous research and development. Some of the prominent players in the acetic acid market include:

This report forecasts revenue growth at global, regional, and country levels and provides an analysis on the latest industry trends in each of the sub-segments from 2018 to 2030. For this study, Grand View Research has segmented the global acetic acid market report based on application and region: 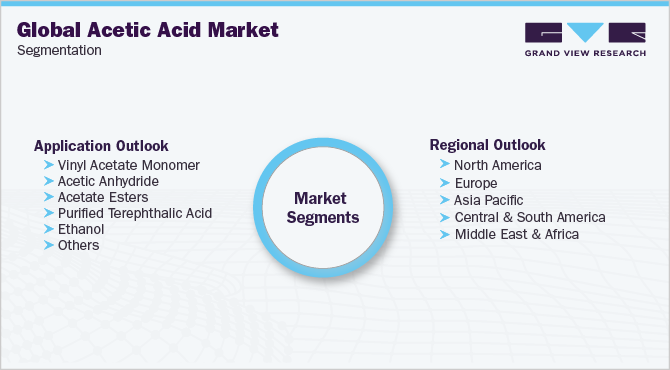 How big is the acetic acid market?

What is the acetic acid market growth?

Which segment accounted for the largest acetic acid market share?

b. The Asia Pacific dominated the market and accounted for 45.9 % of the global revenue in 2021. This is attributable to the increasing penetration of polymer formulators in the region.

Who are the key players in the acetic acid market?

What are the factors driving the acetic acid market?

b. Key factors that are driving the acetic acid market growth include rising demand for the product from vinyl acetate monomer (VAM) producers worldwide.

Demand across the organic chemicals sector shall register a slump in growth albeit increasing demand for certain chemicals that find end applications in healthcare and food. Furthermore, China, a major supplier of chemicals to the world, registered a considerable decline in manufacturing in the first quarter of 2020, following the trajectory unfolded by COVID-19's escalation to a pandemic. This has led to an imbalance in supply-demand dynamics, forcing manufacturers and customers alike to renegotiate supply agreements. The report will account for COVID-19 as a key market contributor.