The global active calcium silicate market size was estimated at 74.0 kilotons in 2016. Increasing demand from the construction industry is expected to be a major factor driving the global market demand over the forecast period. Moreover, rising demand from passive fire protection and acoustic insulation sectors is expected to positively influence the market for active calcium silicate over the forecast period.

Active calcium silicate is a special chemically coated calcium silicate used in various application segments. It is extensively used owing to its technical properties such as sound adsorption and high-temperature resistance. It is widely available in the form of blocks, powder, and boards. The key application segments include ceramics, fire protection, cement, paints & coatings, and insulation.

In terms of volume, the U.S. active calcium silicate market was estimated at 5.8 kilotons in 2016 and is projected to grow at a CAGR of 5.3% from 2017 to 2025. Favorable regulatory compliances to direct and regulate fire safety standards coupled with increasing acoustic insulation demand is fueling the growth of the market in this country. In addition, robust growth in the ceramics industry is projected to drive the growth till 2025. This growth in the ceramics industry is credited to rising demand from the housing and construction sector in the country.

Regulatory standards laid down by various regulatory bodies such as NIOSH, OSHA, and EAPFP are hindering the market growth. OSHA has led down standards for permissible exposure limit (PEL) to avoid severe human health and safety issues such as eye pain & redness, throat scratchiness, and skin eruptions. These regulations may incur additional expenses which may add to the manufacturing costs, and hence may act as a challenge.

Insulation has emerged as the leading application segment and accounted for 28.84% of the global volume share in 2016. This growth is driven by increasing need from various high insulation industries such as petrochemical, steel, and glass. Moreover, owing to its dynamic nature, it is extensively utilized in the production of acoustic tiles and wallboards in order to provide sound proofing and make them resistible to fire.

The development of infrastructural and residential construction projects in emerging economies is expected to drive the growth over the years ahead. Ongoing constructions including airports, rail transports, roads, and harbors is expected to boost the demand. In addition, increasing government spending from the major economies such as China, India, and Brazil is fueling the demand for active calcium silicate, as it is extensively used for passive fire protection and acoustic insulation purpose.

The ceramics application segment is anticipated to grow at a CAGR of 5.0% from 2017 to 2025. Rising demand for false ceilings, and acoustic tiles is projected to increase the demand for active calcium silicate over the forecast period. This growth is driven by increasing false ceiling applications in the construction industry for aesthetic views.

Europe was the leading region in the active calcium silicate market in terms of volume in 2016, and this trend is anticipated to continue over the years ahead. In terms of volume, fire protection was fastest-growing application segment in 2016 and is projected to grow at a CAGR of 6.4% between 2017 and 2025. The presence of regulations and guidelines pertaining to fire safety standards in commercial and residential building is fueling the demand for active calcium silicate over the forecast period. 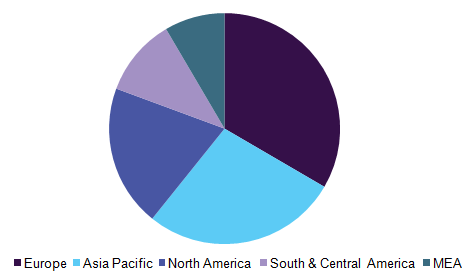 Europe was followed by Asia Pacific to register second-largest market size during the same year. Robust growth in the construction industry in this region is expected to fuel the growth over the forecast period. Furthermore, rising government spending in residential construction sectors in major economies especially India is expected to fuel the product demand further.

This report forecasts revenue and volume growth at global, regional & country levels and provides an analysis on the industry trends in each of the sub-segments from 2014 to 2025. For the purpose of this study, Grand View Research has segmented the global active calcium silicate market on the basis of application and region: