The global advanced wound dressing market size was valued at USD 6.6 billion in 2020 and is expected to expand at a compound annual growth rate (CAGR) of 5.5% from 2021 to 2028. The demand for advanced wound dressing is increasing owing to technological advancements, an increasing number of surgical procedures, and the rising prevalence of chronic wounds across the globe. The increasing incidence of chronic diseases such as diabetes, cancer, and other autoimmune diseases is driving the demand for advanced wound dressing. Factors such as antimicrobial resistance, adoption of unhealthy and sedentary lifestyles, alcohol consumption, and smoking are some of the major factors contributing to the rise in the prevalence of non-communicable diseases. 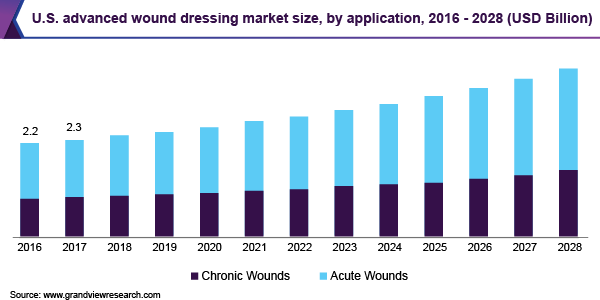 According to the National Diabetes Statistic Report 2017, published by the Centers for Disease Control and Prevention (CDC), more than 100.0 million people in the U.S. were living with diabetes or prediabetes conditions. In addition, the WHO reported that in 2016 approximately 1.6 million deaths globally were directly caused due to diabetes.

Cancer has been a global healthcare burden as it is one of the leading causes of death. According to estimates from the WHO, cancer is the leading cause of death globally and almost 1 in 6 deaths can be attributed to the disease. In addition, it also reported that over 70% of cancer-related deaths typically occur in middle- and low-income countries. According to estimates from Cancer Organization, in 2018, cancer was the second leading cause of death and about 1,735,350 new cancer cases were registered in the U.S. In addition, nearly 4,700 new cases of cancer are diagnosed each day in the country.

As a result of the rising prevalence of chronic conditions, the number of surgeries being performed has also increased. Wound care products, thus, are increasingly being used to prevent surgical site infections. Most surgical wounds, post-cancer surgery, are relatively large in size and deep, releasing exudates that require regular management. Advanced wound dressing products such as hydrogel, alginate, and foam help manage large wounds, thereby significantly reducing the risk of infection. Thus, the rising incidence of chronic diseases is expected to boost the demand for wound care products, thus propelling the market growth.

Rapidly increasing demand for home healthcare services can be attributed to the growing workforce pertaining to home-care services. This is expected to act as a major driver for the market for advanced wound dressing. According to the U.S. Bureau of Labor Statistics, in the U.S., the number of home healthcare and personal care aides is expected to reach 13.0 million in 2020. Moreover, the increasing geriatric population is likely to promote home healthcare services as aged people are more likely to avail themselves of such services. As per the Population Reference Bureau in 2018, the number of Americans aged 65 and above is expected to increase from 52.0 million in 2018 to 95.0 million by 2060. In line with this, the percentage of the geriatric population would rise from 16.0% of the total population in the U.S. in 2018 to 23.0% in 2060.

The foam dressings segment dominated the market for advanced wound dressing and accounted for the largest revenue share of 23.6% in 2020. The segment is expected to witness a considerable growth rate over the forecast period. Foam dressings are made up of highly absorbent material called hydrophilic polyurethane. The foam helps in absorbing the moisture that aids in maintaining the integrity of the tissue. The increasing cases of burns and trauma in the U.S. are expected to propel the segment growth. For instance, as per the American Burn Association (ABA) in 2016, around 486,000 people were given medical treatment for burning injuries in the U.S. It also reported that complications of infection have accounted to be highest in burn patients. Foams are majorly used to prevent and heal the exudation of burn injuries and hence the increasing cases of such incidents are expected to surge segment growth over the forecast period.

The hydrocolloid dressings segment is anticipated to witness the fastest growth rate over the forecast period. Hydrocolloid dressings are made up of gel-forming agents such as Carboxy Methylcellulose (CMC) and gelatin. These materials are occlusive in nature which helps in moisture retention. These advanced dressings allow rapid healing and are impermeable to any type of bacterial infection. Thus, it helps in protecting the wound internally as well as externally. The rising number of cases of diabetes across the globe is expected to promote segment growth over the forecast period. For instance, as per the CDC in 2016, around 5.0% of the people in the U.S. were diagnosed with Type 1 diabetes and approximately around 15.0% of this diabetic population suffers from diabetic wounds or diabetic ulcers. Hence, such instances are expected to surge the demand for hydrocolloid wound dressing over the forecast period.

The acute wounds segment dominated the market for advanced wound dressing and accounted for the largest share of 60.1% in 2020. The segment is anticipated to witness a considerable growth rate over the forecast period. The acute wounds comprise surgical and traumatic wounds and burns. The surgical and traumatic wounds segment held the largest share in 2018 owing to the increasing cases of trauma in the U.S. The burns segment is anticipated to witness the fastest growth rate over the forecast period owing to the rising incidence of burn injuries.

The chronic wounds segment is anticipated to witness a considerable growth rate over the forecast period. The increasing cases of chronic diseases, especially diabetes, and the rising geriatric population in the country are the major driving factors for the segment growth. For instance, as per the United States Census Bureau, the number of people aged 65 or older population, grew by 1.6 million from 2016 to 2017. The segment is further subdivided into diabetic foot ulcers, pressure ulcers, venous leg ulcers, and others.

The hospitals' segment dominated the market for advanced wound dressing and accounted for the largest revenue share of 44.9% in 2020. The increasing cases of diabetic foot ulcers and venous leg ulcers are the major driving factors for the growth of the segment. In addition, increasing cases of surgical wounds due to the rising number of surgeries is also driving the segment growth. Advanced wound dressing is generally used for healing SSI wounds. Thus, such factors may surge the segment growth over the forecast period. 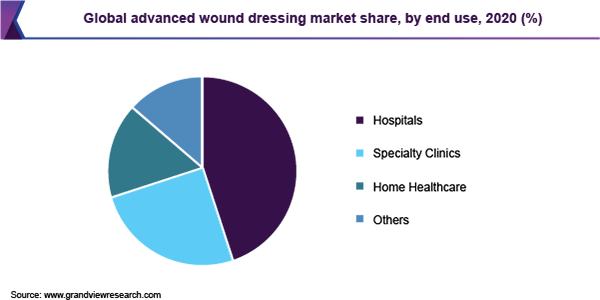 Homecare is expected to witness the fastest growth over the forecast period. Most of the surgeries require a prolonged recovery period, leading to frequent changing of dressing. Thus, the demand for advanced wound care products in-home healthcare settings is increasing. Moreover, the geriatric and bariatric population and patients suffering from chronic wounds prefer homecare over hospital stays.

North America dominated the advanced wound dressing market and accounted for the largest revenue share of 45.4% in 2020. The region is expected to witness a considerable growth rate of 5.6% over the forecast period. Increasing road accidents, sports injuries, and the presence of several key players in the region are anticipated to drive the market for advanced wound dressing in the region. In addition, the presence of adequate skilled professionals and highly developed healthcare infrastructure is also expected to drive the market in the region over the forecast period.

In Asia Pacific, the market for advanced wound dressing is anticipated to witness the fastest growth over the forecast period. The presence of developing countries such as China, India, and Japan is anticipated to boost the growth of the market in the region. In addition, the rapidly growing medical tourism industry in these countries can also be attributed to the increase in demand for advanced wound dressings in this region. For instance, as per the report on Export Health Services by the Directorate-General of Commercial Intelligence and Statistics of India, in 2016-2017, India had 58,300 medical tourists on medical visas.

Key players are involved in adopting strategies such as mergers and acquisitions, partnerships, and launching new products to strengthen their foothold in the market for advanced wound dressing. For instance, in May 2019, 3M acquired Acelity, Inc. with an aim to strengthen its wound management solutions and expand its customer pool.

Key players are investing heavily in research and development to manufacture technologically advanced products. For instance, in March 2017, ConvaTec Group PLC launched the Sensi-Care Skin Protectant Incontinence Wipes, which was expected to expand its wound business and increase its market share. Some of the prominent players in the advanced wound dressing market include:

This report forecasts revenue growth at global, regional, and country levels and provides an analysis of the latest industry trends in each of the sub-segments from 2016 to 2028. For the purpose of this study, Grand View Research has segmented the global advanced wound dressing market report on the basis of product, application, end-use, and region:

How big is the advanced wound dressing market?

b. The global advanced wound dressing market size was estimated at USD 6.6 billion in 2020 and is expected to reach USD 6.9 billion in 2021.

What is the advanced wound dressing market growth?

b. North America dominated the advanced wound dressing market with a market share of more than 42.00% in 2019. This is attributable to the rising incidence of chronic and acute wounds.

Who are the key players in the advanced wound dressing market?

What are the factors driving the advanced wound dressing market?

b. Key factors that are driving the market growth include the rising prevalence of chronic diseases globally, increasing awareness towards the usage of advanced wound care products, rising incidence of sports injuries, and rising geriatric population across the globe.