The global aerospace forging market size was valued at USD 28.1 billion in 2019 and is anticipated to grow at a compound annual growth rate (CAGR) of 4.2% from 2020 to 2027. Increasing air passenger traffic across various regions is the primary factor driving the market for aerospace forging. With growing passenger traffic, giant companies such as Airbus and Boing are likely to witness an increase in the number of commercial aircraft deliveries over the coming years. As per the International Air Transport Association, air passengers are likely to double over the next decades compared to today’s levels. Nearly 8.2 billion passengers are projected to travel using air transportation services by 2037. 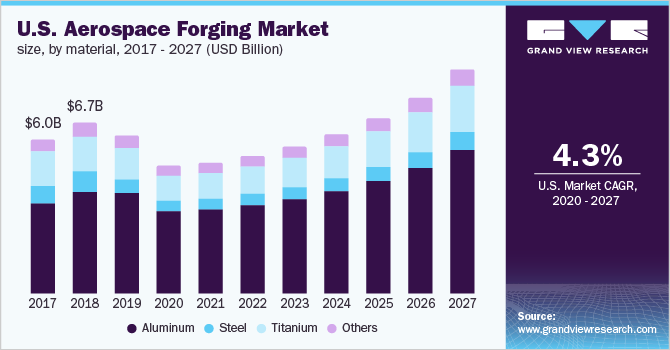 Continuous investments in military equipment and strong air transportation demand are projected to assist in the growth of the aerospace forging industry in the U.S. Operators are projected to replace the old models with advanced, lighter, and fuel-efficient models. As per the data published by Boeing, 9,130 new aircraft are likely to be delivered in North America by 2038.

The aerospace and defense sector requires a large number of forged components manufactured using various alloys. Components such as turbines, landing gears, engine parts, and machined parts are projected to witness increasing demand over the coming years. The high strength of these components makes them suitable for aerospace applications.

Factors such as adoption of new materials including high performance & special alloys and R&D for new manufacturing methods are expected to boost the growth of aerospace forging market. In addition, methods like precision die forging are helpful in producing complex parts. Closer dimensional tolerances and detailed geometric features of precision die forging make it suitable for manufacturing critical components of aircraft.

The COVID-19 pandemic caused the global aerospace industry to plunge into an unprecedented crisis as airline travel plummet in response to business restrictions, regulation on travel. The demand was also impacted by temporary closure of manufacturing sites of OEMs and component manufacturing companies. For instance, companies such as Boeing and Airbus suffered major losses in 2020. In January 2021, Boeing reported loss of USD 12 billion in 2020, owing to halting of production. Also, it will take 3 years for the company to return 2019 levels.

Developing economies including India scaled down their forging production during early pandemic period. As per the Association of Indian Forging Industry, majority of foundries operated at nearly 50% of its operating capacities during lockdown period of COVID-19 due to temporary closure of aerospace and auto manufacturing facilities and thus low demand. However, in the long run, India can be benefited from the impact as various companies are looking to shift their production facilities from China and South Korea to India.

Forging market faces competition from casting industry, wherein forged products are now being replaced by cast products in some applications. The substitution is projected to increase with the advancement in casting technology. Many forged components such as transmission parts and crankshafts are now manufactured using casting due to improvement in technology and low cost associated with it. Large investment casting products such as aerospace structural parts have replaced forgings in the recent past due to technology advancement.

Forging industry falls under the category of heavy industry as it requires huge space and produces large & heavy products, large machine tools, and other heavy equipment. Owing to these reasons, heavy industry requires large capital. In addition, skilled professionals are required to handle the storage and transportation of finished components.

Aluminum emerged as the largest segment in 2019 with a volume share of 55.7%. The use of aluminum in the aerospace industry is increasing at a rapid pace owing to its lightweight properties. Aircraft nowadays are becoming lighter, modern, and fuel-efficient compared to old models. The development of advanced aluminum alloys in combination with other metals is another key factor that is likely to propel the demand for aluminum forged parts.

Titanium is projected to expand at a CAGR of 7.1% from 2020 to 2027 in terms of revenue. It is a lighter material like aluminum and has superior specific strength, corrosion resistance, and ability to withstand high temperatures. The amount of titanium used in aircraft is growing at a rapid pace. It also has high compatibility with materials, such as carbon fiber. However, difficulty during the forging of titanium material represents a major challenge for forging companies.

Other materials such as stainless steel, nickel-based alloys, magnesium alloys, and copper are also used in the aerospace sector. Demand for precision forged parts is one of the key focus areas for aerospace forging vendors for the usage of these materials.

The commercial aircraft segment held the largest share of 51.1% in 2019 in terms of volume and is expected to witness the fastest growth from 2020 to 2027. Strong travel demand has boosted the new aircraft demand in recent years. Growth in air passenger traffic in Asia Pacific is likely to attract demand for forged components over the long term.

Globally, Airbus and Boeing delivered more than 20,000 jetliners over the last 10 years, an increase of 66% compared to the previous decade. As per the latest published data from Airbus, from 2028 to 2038, Asia Pacific is likely to witness demand for 10,040 new aircraft deliveries. The emerging middle-class population in developing countries is expected to play a significant role in rising passenger traffic. As per the same data, the middle-class population in the Asia Pacific has increased from 32% in 2008 to 50% in 2018. 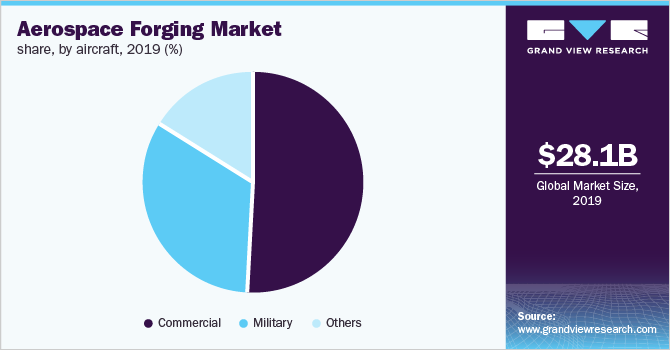 The military segment is expected to witness considerable growth over the forecast period. Growing demand for military aircraft on account of the increasing defense budget is likely to remain a key factor for the growth of the segment. Defense spending has been witnessing an incessant increase over the last few years owing to the increasing global security concerns and focus on military modernization. This is also likely to create opportunities for defense contractors and vendors in the supply chain.

In terms of both revenue and volume, Asia Pacific held a substantially larger share in the global aerospace forging market in 2021. China is the fastest growing aviation market in the world. It is likely to attract over 8,000 new aircraft deliveries over the next 20 years. The robust demand is projected to offer USD 1.6 trillion opportunities for aftermarket services during 2019 to 2028. China also ranks at second position in terms of defense spending. In 2021, China allocated nearly USD 293 billion to defense industry, increase of 4.7% from 2020. Thus, in the long run, China is likely to attract significant demand for aerospace forgings.

China is the leading consumer and producer of different types of forgings. The country accounted for 15.4% of the global revenue share in 2021 and is likely to progress at a CAGR of 4.2% over the forecast period. China is a major exporter of forgings to the U.S. and Europe. However, high machinery & equipment cost along with reduced margins have impacted the small and medium Chinese enterprises in recent past.

The UK has aircraft manufacturing companies including Leonardo and BAE systems; however, aerospace sector in the country is largely dominated by aerospace parts manufacturing companies. The sector specializes in the production of high-quality parts for commercial and military aircraft, including engines, structures, wings, and advanced systems. The demand for forged components in aerospace sector is driven by the presence of few selected OEMs including Boeing and Airbus. 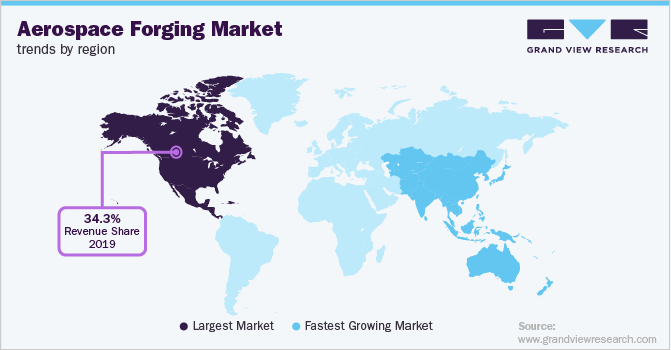 Capacity expansion is the key strategic initiative adopted by majority of market players, followed by new product development and acquisitions. Several small and medium players are also adopting different growth strategies to improve their market position. For instance, in September 2020, Wuxi Paike New Materials Technology Co., placed order for new rolling machine production of aerospace engine components. It is one of the largest ring-rolling machines, capable of producing engines with height over 1,500 mm.

The development of advanced materials such as lightweight aluminum and titanium is likely to open up new sales avenues for market vendors. Investment in new forging presses and production capacities is projected to remain a key strategy among market participants. For instance, in 2019, Otto Fuchs KG, a Germany-based company, invested in 30,000 tons of forging press for the production of engine, landing gear, and structural parts. Some of the prominent players in the aerospace forging market include:

This report forecasts volume and revenue growth at the global, regional, and country levels and provides an analysis of the latest industry trends and opportunities in each of the sub-segments from 2016 to 2027. For the purpose of this study, Grand View Research has segmented the global aerospace forging market report based on material, aircraft, and region: 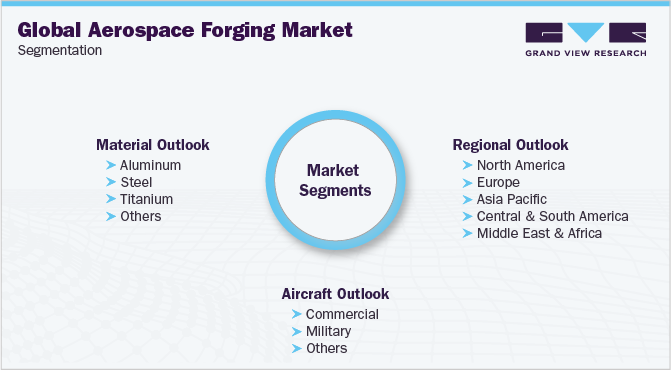 How big is the aerospace forging market?

What is the aerospace forging market growth?

Which segment accounted for the largest aerospace forging market share?

b. Aluminum dominated the aerospace forging market with a share of 59.5% in 2019. This is attributable to development of advanced aluminum alloys in combination with other metals owing to lightweight properties.

Who are the key players in aerospace forging market?

What are the factors driving the aerospace forging market?

b. Key factors that are driving the market growth include continuous investments in military equipment and strong air transportation demand.