Global air passenger traffic grew by over 6% in 2015 owing to lower airfares along with an increase in the frequency of flights. The Middle East and Africa, outperforming North America, witnessed considerable growth with increasing revenue passenger kilometers year on year. Aviation lubricants improve the operational efficiency of engines, by reducing friction between two coated surfaces, resulting in more distance traveled with the same amount of fuel.

Regulatory policies such as mandating group III oil as the primary base stock are expected to impact market dynamics positively by creating demand. Group III oil is characterized by high viscosity index and low Sulfur content resulting in better performance. Production deficit in North America and Europe makes them attractive markets for Group III oil surplus regions such as the Middle East and Asia in the foreseeable future.

Increasing defense spending by the governments particularly in countries such as the U.S., Russia, China, and India is expected to boost aviation lubricant demand over the forecast period. U.S. spending on defense is about the same amount as the spending of the next 14 countries considered. New technologies have resulted in the West, in general, and the U.S. losing part of its competitive edge to countries such as China and Russia.

Factors such as Russia modernizing its armored fighting vehicles and China’s ballistic missile system are expected to complement demand. The overall balance of power in defense spending is shifting owing to reduced war spending in the U.S. & NATO allies, even after constant threats including ISIS and Al-Nusra Front.

Southeast Asian countries are building up defense capabilities to secure their assets by modernizing and replacing aging fleets, followed by a period of sustained growth. Access to defense-specific high technologies is increasing resulting in the leveling of technological fields for every country. This is expected to challenge governments to keep pace with the advancements in the future.

Gas turbine oil was the leading product segment valued at over USD 300 million in 2014. They are selected depending on the requirements of the engine. Gas turbine oil provides thrust and helps inefficient cooling. It also helps in preventing the formation of sludge, rust, and corrosion while the engine is operated. All such factors result in the operational efficiency of the fuel.

Gas turbine engines in aircraft have been in typical demand for the past 40 years. The lubricants required by this type of aircraft engine are responsible for maintaining smooth operations of potential high-tear vulnerable engine components. Gas turbine oils also aid in reducing overall engine working temperature and thereby increase reliability, lower operating costs, and ensure the engine’s trouble-free operation for a longer duration of time.

Piston accounts for over half of the engine’s friction and any improvement in this section have a direct impact on fuel efficiency. Chase towards higher efficiency, turbocharging, and increased outputs, piston manufacturers are relying on innovation and technological advancement. Piston engine oil is used to reduce friction and act as a sealant, coolant, and viscosity improver. The product segment is expected to grow at a CAGR of 4.9% over the forecast period.

Hydraulic oil was valued at over USD 180 million in 2014. They are majorly classified into three categories general, wear-resistant, and flame-retardant hydraulic oil. With increasing operating temperatures and pressures, the hydraulic fluid provides thermal stability, high anti-wear characteristics, long life, resistance to flow, and a constant viscosity regardless of the temperature.

In terms of hydraulic lubricants designed for use in the aerospace industry, the formulators optimize their lubricant products to fit the operational criteria of both militaries as well as commercial aircraft. These fluids function smoothly under high temperature conditions, provide good oxidation and chemical stability, and maintain the overall conditions of the components in constant friction.

Other segments consisting of greases and compounds is expected to witness considerable growth over the forecast period. Grease possesses high initial viscosity and imparts effects of an oil-lubricated bearing which has approximately the same viscosity as the base oil used in the grease, upon end-use of shear. It provides resistance to water wash and high structural stability.

Civil was the leading end-use and accounted for 60% of the overall volume in 2014. Increasing air traffic in countries such as China, India, Germany, and Hungary is anticipated to drive growth over the next seven years. Cheaper airfares along with rising living standards in developing regions are expected to further boost end-user segment growth.

Defense is anticipated to emerge as the fastest-growing end-use segment at a CAGR of 5.0% over the next seven years. Increasing expenditure on defense and defense in countries such as the U.S., China, India, France, and Russia is expected to be the dominant driving force. Strong demand for high performance lubricants in extreme conditions along with technology upgradation is anticipated to provide industry participants with lucrative opportunities.

Increasing per capita disposable income coupled with strong economic growth is anticipated to drive commercial aerospace spending in developing regions such as Asia Pacific, Latin America, and the Middle East over the next seven years. Consumers prefer saving time and traveling in comfort due to the fast-moving lifestyle and stringent corporate-oriented work profiles. This has in turn boosted the demand for airlines over other modes of transportation.

Asia Pacific aerospace lubricant market led the global industry and accounted for over one-third of the total volume in 2014 with growth primarily driven by the increasing middle-class population base in China, India, Vietnam, Thailand, Malaysia, and Indonesia. Economic growth in the region has enabled more people to fly out for business as well as leisure. Also, due to increased employment and development of cities, urbanization and urban migration have resulted in increasing capacity with initiatives such as the Airbus.

An increasing number of direct airport connections within the Asia Pacific region has stimulated demand owing to reduced travel time for passengers coupled with the fact that the fares have been decreasing. The increasing number of space programs and related initiatives particularly in India is expected to boost demand over the forecast period. 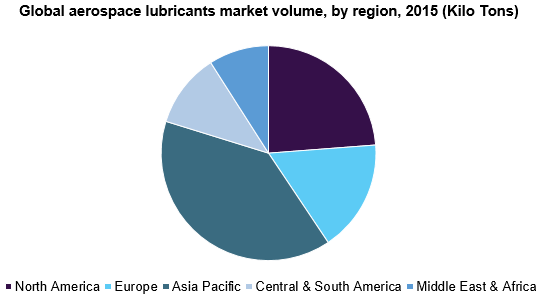 Central & South America and the Middle East & Africa accounted for over 20% of the total volume in 2014 collectively. These regions are characterized by increasing disposable income coupled with an increase in trade activities to and from the regions. Recovery from Ebola is expected to complement demand in a phased manner.

Tourism and the high growth of the services industry in the UAE, Oman, Qatar, and Saudi Arabia are the prime driving factors in the future. Central and South America are also expected to be the fastest-growing segment, growing at a CAGR of over 5% from 2014 to 2022, followed by the Middle East and Africa.

With advancements in mobility across all emerging economies such as India, Japan, Korea, and Mexico, the demand for aircraft and aerospace lubricants increased significantly over the past few decades. Tourism has been gaining importance due to high consumer disposable income across developing countries. This has boosted the demand for high-performance aerospace lubricants across Asia Pacific and Central & South American countries.

Manufacturers such as Fuchs Lubrications have also integrated forward to become suppliers, distributing aerospace lubricants themselves to diverse end-users. This enables these companies to better cater to & maintain customer relations directly, thus negotiating on undesirable factors that are otherwise experienced through issues with distributors or suppliers. Another major advantage these companies enjoy includes a substantial reduction in logistics costs, as their supply chain would be indigenous in nature.