The global agricultural biologicals market size was valued at USD 7.2 billion in 2019 and is expected to register a compound annual growth rate (CAGR) of 9.4% from 2020 to 2027. Rising demand for organically cultivated food products is projected to be a key driving factor for the market. 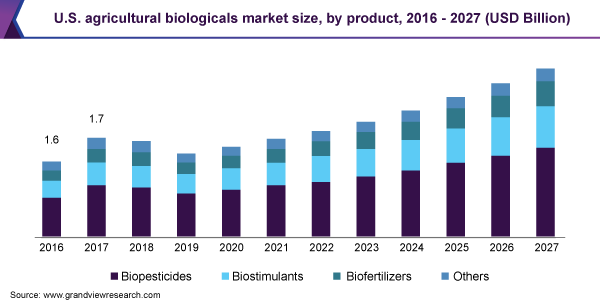 Agricultural biologicals, also commonly known as biologics, crucial tools for crop protection as well as production, are derived from natural materials. These products help protect plants against pests and are increasingly becoming an integral part of modern farming practices. Multiple agricultural communities globally have been using these products to establish sustainable farming.

U.S. is one of the largest consumers globally. The demand in the country is driven by growing demand for greener and safer crop protection technologies. The regulatory agencies in the country have shown greater involvement, in terms of product approvals and changing regulations to increase market penetration. The rising number of mergers and acquisitions coupled with partnerships for research and new product development are also expected to benefit the market growth in the country.

The major strategies adopted by industry participants include investment in research & development and targeting emerging economies for their next growth opportunity. The industry development is still in its nascent stage and the merger & acquisition activities are moderate. The major rationale behind acquisition is either improving product portfolio or expanding geographies. The number of product approvals and investment in bio-ingredients is growing rapidly, which is expected to result in intense market competition in the future.

Moreover, with multiple million-dollar companies working for developing high-performance agricultural products, such as fertilizers and pesticides, the need for alternative eco-friendly products is at its peak. Decades of cultivation practices using synthetic products for aggressive crop yields globally have led to a massive impact on the underground water reserves and soil fertility. These factors have led to the increasing adoption of sustainable farming, which led to the high penetration of organic products.

According to the European Biomass Industry Association, the market is anticipated to witness significant growth over the forecast period as these products substantially decrease the consumption of synthetic chemicals for attaining increased crop yields. Among the biological products, biofertilizers are gaining significant traction as they enhance the phosphorus and zinc absorption properties of plants as well as resist pathogen attacks. Furthermore, the use of biofertilizers in agricultural fields significantly helps in the decomposition of organic residue and aids the overall growth & development of plants & crops.

In terms of price points of bio-based agricultural products and synthetically formulated products, prices of biobased crop care products are marginally high. However, rising prices of synthetic fertilizers are projected to remain a key factor in boosting the consumption of agricultural biologicals in the coming years. With a rapidly rising global population, food scarcity remains a critical issue for governments around the globe. This has led to innovations, in terms of product development and promotion of eco-friendly agricultural solutions in the major agrarian economies. This, in turn, is anticipated to augment the demand for agricultural biologicals across the globe.

Biopesticides led the market accounting for the largest share of over 56% in 2019. The segment will expand further at a steady CAGR from 2020 to 2027. This high share is attributed to the increasing consumption of biopesticides in soil, foliage, and turfs, especially across North American and European countries. Some of the key products in this category include insect sex pheromones and scented plants, which attract pests to trap. Microbial pesticides, however, contain active ingredients, which control several types of pests. The highly utilized microbial pesticide includes strains of Bacillus thuringiensis, which forms a protein mix to kill the pests.

Biofertilizers are expected to gain importance across North American countries followed by countries in the Asia Pacific region and Europe. There are typically two major biofertilizer products, which include phosphate solubilizing and nitrogen fixing products. Nitrogen-fixing bacteria are most commonly utilized as biofertilizers as plants do not have the ability to convert atmospheric nitrogen into fixed nitrogen, which is essential for their growth and development.

Azotobacter, Rhizobium, and Azospirillum are majorly used bacteria for nitrogen fixation in seed and soil treatment applications. Nitrogen-fixing rhizobium has the ability to develop endosymbiotic association with the roots of legumes, which paves its way for use as biofertilizers in the cultivation leguminous crops. Aerobic nature of Azotobacter along with its neutrality in alkaline soil has increased its application scope in the cultivation of crops including maize, wheat, cotton, mustard, and potato.

In addition, agricultural biostimulants, which are fertilizer additives derived biologically, are also gaining significance. These are used for enhancing crop productivity, growth, and health. Biostimulants aid in effectively improving abiotic stress tolerance, nutrient-use efficiency, and also physical attributes, such as size and appearance along with longer shelf-life.

The seed treatment method accounted for the maximum market share of over 23% in 2019. This is attributed to the widespread demand for biologicals in advancing seed properties to increase crop yield. Biofertilizers are majorly utilized in seed treatment as well as soil treatment applications. Aggressive consumption of synthetic fertilizers and a multitude of other crop care chemicals, such as pesticides and insecticides, over the past couple of years, has led to a substantial deterioration in soil quality across all major agrarian economies.

However, many governments have imposed regulations on the agricultural sector taking into consideration the environmental hazards caused due to excessive use of chemical products in farming, which is projected to reflect a positive growth trend for biofertilizers in various seed and soil applications across the globe. The governments of China, India, and Pakistan have framed numerous initiatives to promote the application of eco-friendly products for seed treatment at domestic levels.

The government of Pakistan launched the Biopower Program and Humiphos/Biophos in 1996 and 2010, respectively. These programs aimed at the deployment of biofertilizers for seed treatment by farmers along with financial support to various agricultural agencies to promote this practice. Furthermore, in the Middle East & Africa, the governments of South Africa, Nigeria, and Kenya initiated loan programs for farmers to boost crop yield at domestic levels. As a result, farmers in the region increased the application of agricultural biologicals in seed treatment.

Among several microbes, Metschnikowia pulcherrima strains are observed to be the most widely utilized biocontrol agent for post-harvest applications. Application of agricultural biologicals in post-harvest phase is increasingly gaining traction due to multiple cases of crop loss and spoilage observed since the past decade. This is yet another key factor anticipated to increase product demand over the next couple of years.

The cereals & grains application dominated the market with a share of 41.6% in 2019. This is attributed to growing demand for wheat, rice, corn, barley, and millet across the globe. Furthermore, multiple microbiological advancements in determining the suitable composition of agricultural biologicals for application in wheat cultivation have resulted in high demand for biologics, thereby boosting segment growth.

Also, across several developing agricultural economies, such as Japan, Thailand, India, and Indonesia, along with multiple Latin American countries, the need for effective technology related to bio-based product development is at its peak. This is majorly to boost the growth of several pulses and oilseeds in the respective regions to cope up with the rapidly growing demand. 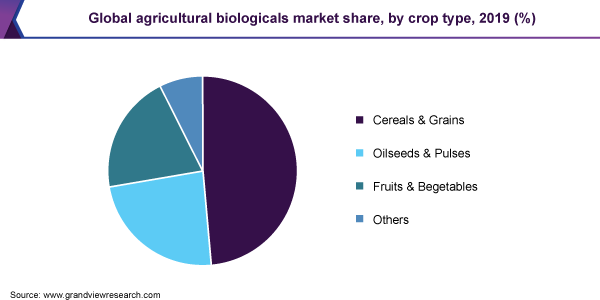 The efficient growth of several pulses is attributed to symbiotic performance reflected by strain efficiency and host genotype. The higher the symbiotic performance, the higher the pulse yield. With multiple agricultural organizations taking measures to ensure high microbial strain testing for increased production of pulses and oilseeds, the demand for various biological agents in this spectrum is anticipated to reflect high development over the forecast period.

North America led the market in 2019 and held a major share of over 35%. The region will expand further at a healthy CAGR over the forecast years due to the strong presence of global agricultural product manufacturing companies, with majority of the producers concentrated in the U.S. The growth is also attributed to the constantly evolving agricultural practices in the region with respect to farming techniques, technological adaptations, constant research & development, and government regulations promoting sustainable farming methods.

North Dakota, California, Montana, Wisconsin, and New York are among the largest states practicing organic cultivation. The demand for agricultural biologicals in the U.S. rose significantly as agricultural communities recognized the degrading underground water reserves and soil quality due to the aggressive use of chemical-based fertilizers and other agricultural inputs for decades.

The southern areas of the country had a comparatively lower number of certified organic farmlands, however, it reflected a heavy adaptation of organic practices since 2011. For instance, Arkansas reflected a whopping 540% hike in organic farmlands from 2011 to 2016, according to the USDA. These trends are projected to reflect high market growth in the U.S.

The Asia Pacific is projected to register the fastest growth rate from 2020 to 2027 as the region is a hub for majority of the agrarian economies, such as India, Thailand, Japan, Malaysia, South Korea, and the Philippines, that follow more sustainable form of agriculture practices. This trend is backed with increasing consumer preference for organic food coupled with regulatory initiatives and agricultural reforms undertaken by various governments.

Europe is the second-largest regional market. Nearly 7% of the region’s overall agricultural land was dedicated to organic harvesting, wherein the area of organic farmlands is twice that of conventional farmlands in the region. Europe recorded a 70% rise in organic farmlands during the past decade, with over 250,000 farms involved in organic harvesting. The largest retail markets for organic produces in Europe include Germany, followed by France, Italy, and the U.K.

Major manufacturers are continuously focusing on new product developments, partnerships, M&A, and collaborations to reach out to the maximum potential customers at optimum distribution cost. Companies, such as Bayer CropScience and BASF SE, are integrating their operations across the value chain to retain their market position. New industry participants are focusing on establishing long-term contracts with local and regional farming communities to ensure increased market reach and establish themselves in the market. Some of the prominent players in the agricultural biologicals market include:

This report forecasts revenue growth at a global, regional, and country levels and provides an analysis of the latest industry trends in each of the sub-segments from 2016 to 2027. Grand View Research has segmented the global agricultural biologicals market report on the basis of product, application method, crop type, and region: