The conventional agriculture plays a vital role in meeting the demand for food and cereals for the expanding global population. However, the conventional method is largely dependent on the chemical fertilizers and pesticides which are primarily exploited to increase the crop yield. This directly harms the environment and causes pollution. In the recent years, efforts have been invested to promote and implement sustainable farming and bio safety. 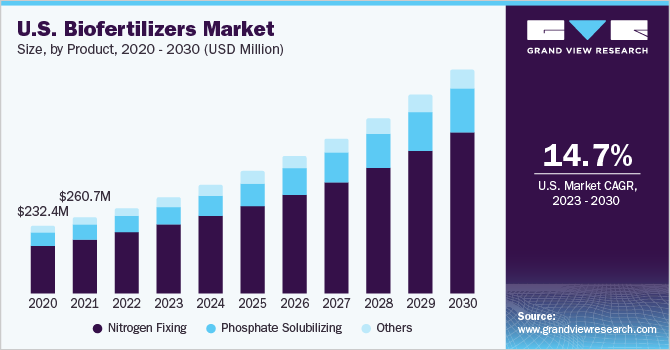 The EU “Common Agricultural Policy” promotes use of bio based products along with organic farming and provides up to 30% of the budget as direct green payment to farmers complying to sustainable agricultural practices. Favorable regulatory scenario, especially in North America and Europe is expected to be a key driving factor for demand growth over the next seven years.

Government of India introduced numbers of schemes to promote the usage of the product in the country. The government initiated schemes are National Mission of Sustainable Development (NMSA)/Paramparagat Krishi Vikas Yojana, Rashtriya Krishi Vikas Yojana (RKVY) and National Mission on Oilseeds and Oil Palm (NMOOP) and Indian Council of Agricultural Sciences (ICAR). The government initiated schemes and plans are likely to boost the market growth over the forecast period.

The synthetic fertilizers are segmented into three categories which include nitrogen, potash, and phosphate. The U.S. imports nearly 50% of nitrogen supplies and 85% of potash supplies, as these imports are vital for the U.S. crop production. Russia, Trinidad and Tobago, and Canada accounted among the largest suppliers of nitrogen to the U.S. The potash imports in the U.S. is driven by three countries including Russia, Belarus, and Canada. However, majority of the phosphate supply in the country was handled domestically.

The U.S. Department of Agriculture (USDA) has launched the plan to promote the organic farming. The National Organic Program (NOP) aims to implement and develop standards for the organically grown agricultural products. The government driven initiative to promote organic farming is expected to drive the product growth over the forecast period.

The growth in the industrial usage of corn is expected to drive the demand for the product over the forecast period. The utilization of corn in the high fructose corn syrup (HFCS) is likely to remain constant despite the decline in the domestic consumption. The growth is anticipated to remain constant for the HFCS owing to the export demand from Mexico which offset lower domestic demand.

Nitrogen fixing was the largest product segment, accounting for over 75.0% of global revenue share in 2014. The product demand is largely catered by the regional markets of North America and European region. The distinct feature of the product to improve nitrogen yield in the soil through inhabiting microbial and organic growth of the soil is expected to drive the demand of the product in the respective regions.

Phosphate solubilizers were the second largest product segment, accounting for 15.0% of global revenue in 2014 and are also expected to be the fastest growing at a CAGR of 13.9% from 2015 to 2022. The ability to hydrolyze organic and inorganic phosphate by using soluble bacteria is the distinct feature of the product. The growing popularity of the product in organic farming is expected to boost the segment’s growth over the forecast period.

The usage of zinc and silicate solubilizers in the biofertilizers are categorized under the others product segment. The segment is likely to witness steady growth over the forecast period owing to the demand to degrade silicates and aluminum silicate in the soil and enhance metabolic processes by enabling flow of phosphate ions in the plant body.

Seed treatment was the largest application and accounted for over 65.0% of the market in 2014. Seeds treated with biofertilizers help them sustain bacteria and virus attacks and also aids in increasing the yield. The seed treatment is given by two methods including root dipping and soil application. The convenience in adoption of seed treatment is expected to drive the segment growth over the forecast period. 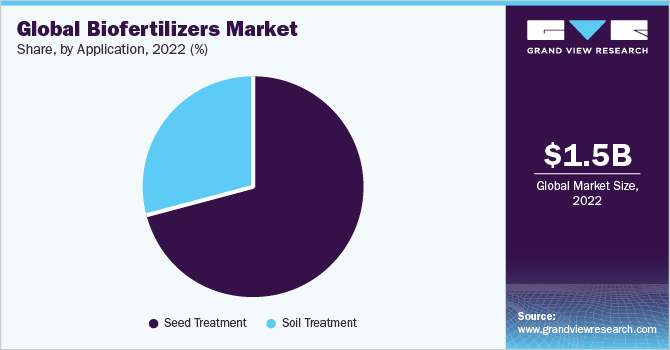 Additionally, they help in harnessing atmospheric nitrogen and making it available to the plant. These seeds are capable of increasing phosphorous content of soil by solubilizing it and improving availability. Rising use of treated seeds among farmers is expected to fuel industry growth over the forecast period.

The soil treatment segment was accounted for nearly 30% of the global biofertilizers industry in 2014. The growth in the segment is largely attributed to the developing country’s organic food market. For instance, in India, the organic food market is expected to grow by nearly USD 1 billion from 2014 to 2020. Thus, growing demand of the organic food in the developing countries is expected to drive the segment’s growth over the forecast period.

Asia Pacific accounted for over 15.0% of global revenue share in 2014. China being the world’s largest agricultural market has been promoting biofertilizers by providing organic product manufacturers with exemption of VAT, excise and agricultural tax. This is expected to fuel demand over the forecast period.

North America was the largest market in 2014 followed by Europe and together accounted for over 54% of the global revenue. Growing preference towards organic food coupled with rising awareness regarding hazards associated with chemical fertilizers and atmospheric pollution has resulted in high consumption of the product in these regions.

Moreover, the growth in the industry is largely attributed to the U.S. organic farming sector. The data revealed by the U.S. Department of Agriculture (USDA) in 2016 showed tremendous increase in the organic farming operations. The certified organic operations in the country was accounted around 21,781 in 2016. Similarly, the global certified organic operation was around 31,160 for the same year.

Majority of these companies have established exclusive agreements with distributors to cater to end-users. Some companies have their own distribution networks, thus increasing their revenues by distributing products of independent manufacturers.

Companies such as Novozymes, Lallemand, AgriLife, and National Fertilizers have established their own retail & distribution outlets in order to cut-down on distribution costs, thus enabling them to sell products at competitive and even lower prices.

This report forecasts revenue growth at global, regional, and country levels and provides an analysis on latest industry trends in each of the sub-segments from 2014 to 2025. For the purpose of this study, Grand View Research, Inc. has segmented the global biofertilizers market report on the basis of product, application, and region: