The global air purifier market size was valued at USD 7.27 billion in 2018 and is estimated to grow at a CAGR of 10.7% from 2019 to 2025. Rising pollution levels coupled with increasing disposable income and growing health awareness regarding the harmful effects of air pollution on human health is expected to fuelindustry growth. Air is the most vital element of human life. However, rapid urbanization and industrialization coupled with an increase in the number of vehicles have significantly contributed to air pollution around the globe.

Air purifier was once considered a luxury good. However, due to rising outdoor and indoor pollution levels coupled with growing concerns regarding the health problems associated with air pollution, air purifiers have become a necessity. Pollen, dust, mold spores, and pet dander can cause allergies to people who are sensitive to them. Moreover, volatile organic compounds (VOCs) and smoke particles can pose serious risks to health. Thus, air purifiers play a vital role in removing these contaminants from the air and, in turn, improving air quality. 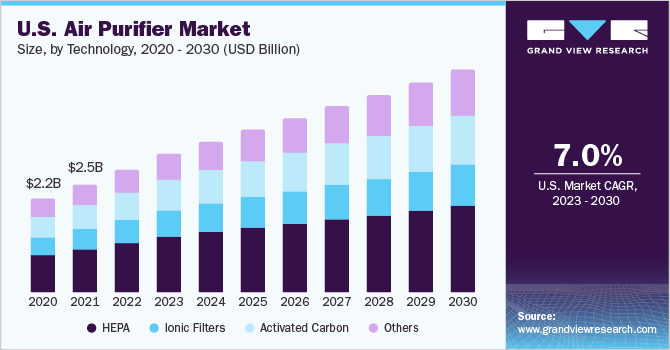 The U.S. accounted for the largest market share of the total market in North America in 2018. Higher disposable income coupled with environmental protection laws, massive industrialization, and increasing awareness to curb pollution is expected to have a positive impact on the industry over the next few years.

Although air purifiers are considered a necessity in developed countries, they are still considered a luxury good in developing countries such as India. The overall cost associated with the purchase and maintenance of these products is high, which proves to be a deterrent for many consumers. The maintenance cost associated with the replacement of filters and other components is also high.

Several government and international organizations have set standards and regulations as well as issued guidelines pertaining to the indoor air quality, which are expected to drive air purifiers industry. Moreover, several air pollution awareness campaigns undertaken globally by various governments and NGOs are further expected to boost industry growth over the forecast period.

The demand for air purifiers is projected to rise over the next few years on account of increasing health consciousness, rising awareness regarding the harmful effects of air pollution through various campaigns undertaken by the government and non-profit organizations, and the improving standard of living especially in developing countries. As the industry is price-sensitive, manufacturers often compete on the price factor in order to gain a competitive advantage.

The HEPA technology segment is anticipated to reach USD 5.33 billion by 2025. HEPA is one of the most effective technology for trapping aerial particles and are widely utilized in residential applications as well as in industries that require high quality air, thus promoting its growth over the forecast period.

Activated carbon technology is anticipated to be the fastest growing technology segment and is projected to grow at a CAGR of 12.3% from 2019 to 2025. Activated carbon air filters have excellent trapping capacity owing to the high surface area of the carbon granules which makes them very effective in the removal of volative organic compounds (VOCs), gases, fumes, and odors.

The ionic filters technology segment held a revenue share 26.38% in 2018. Air-ionizers generate negative ions that get magnetically attracted to the aerial particles due to which they become heavy and settle on grounds or on walls. These ionizers are generally used in industries that generate a huge amount of dust in their production process.

Commercial application segment dominated the market and is projected to grow at a CAGR of 10.5% from 2019 to 2025. Growing number of commercial spaces including offices, hospitals, educational institutes, and recreational facilities among others is expected to have a positive impact on the industry over the forecast period.

Residential application includes small and large scale homes and residential properties. This is expected to be one of the fastest growing application segments on account owing to the growing pollution levels and rapid urbanization in developing countries including India, and China. In addition, rising health consciousness among consumers globall will fuel product demand. 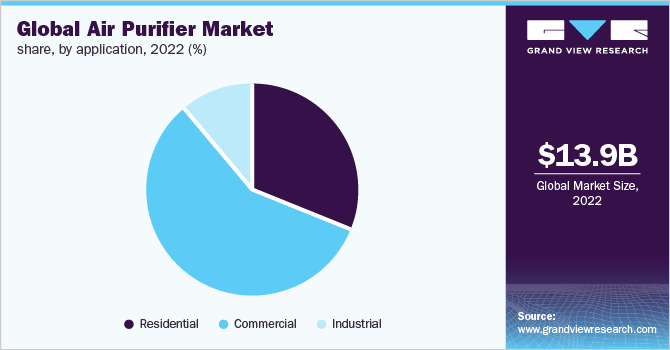 The ambient air quality has been deteriorating over the past decades owing to the growing industrialization and urbanization. This in turn affects the indoor air quality due to dust, gases, and other contaminants entering the indoor premises owing to which there has been a growing requirement for a clean environment which is expected to boost market growth over the next few years.

Air purifiers are used in numerous industries including HVAC, power plants, and manufacturing among others. Its eliminates weld smoke, asbestos, construction dust, tobacco smoke, and other particles that are harmful to employees and workers and also have a negative impact on the environment if untreated.

Asia Pacific emerged as the leading regional market and accounted for 34.04% revenue share in 2018. The region is expected to dominate the industry on account of several factors including rapid urbanization and industrialization coupled with a growing population. Moreover, worsening air quality in several emerging countries in the region such as China, and India, and increasing spending on lifestyle products is expected boost the air purifier market growth.

The North America market is expected to reach USD 4.12 billion by 2025 owing to rising disposable income coupled with environmental protection laws, massive industrialization, and increasing awareness to curb pollution. Moreover, several retailing and promotional events offering discounts as well as attractive payment options may help in augmenting the demand for air purifiers over the forecast period.

Europe air purifier market is anticipated to grow at a CAGR of 9.9% over the forecast period owing to the high purchasing power of consumers coupled with growing awareness among individuals regarding various airborne diseases which is expected to increase the adoption air purifiers in future.

The industry is highly fragmented in nature with the presence of a large number of participants across the value chain. However, the major market share is being shared by industry giants such as Panasonic Corporation, Unilever PLC, Honeywell International, Inc., and LG Electronics, Inc.

This report forecasts market share and revenue growth at global, regional, and country levels and provides an analysis of industry trends in each of the sub-segments from 2014 to 2025. For the purpose of this study, Grand View Research has segmented the global air purifier market report based on technology, application, and region: