The global alcohol ingredients market size was valued at USD 1.54 billion in 2018 and is projected to expand at a CAGR of 8.3% from 2019 to 2025. A key factor driving the product demand includes the rising consumption of alcohol across the globe. Furthermore, the growing adoption of western culture and rapid urbanization in emerging regions like Asia Pacific is also promoting market growth. 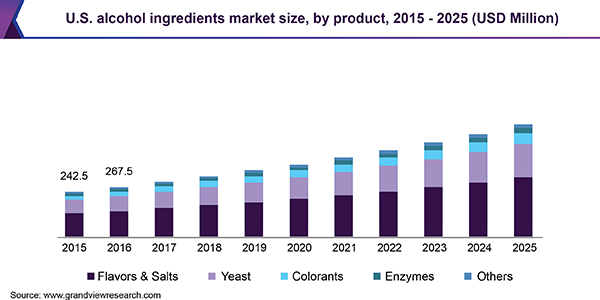 The young population is expected to remain the major consumer base of the alcohol industry. According to the National Health Interview Survey of U.S., in 2017, 35.6% of adults aged between 18 and 24 and 34.3% of adults aged between 25 and 44 had at least one heavy drinking day in the U.S. Similarly, in the U.K., the number of young drinkers has increased significantly as compared to the other age group from 2005 to 2016.

The increasing number of clubs, pubs, and breweries has also been boosting the market significantly. Over the past few years, the number of pubs and bars has increased on a global level. From 2014 to 2016, pubs and bars grew by 23.5%. These places have become a common platform for socializing, especially among the millennials. From 2013 to 2016, the number of Pubs, Bars, and Liquor-Serving Cafes and Lounges (PBCL) outlets increased from around 5,300 to 6,700 in India.

The rising demand for craft beer is also an important growth driver for this industry. The number of craft breweries has increased from 3,814 in 2014 to 7,346 in 2018, which indicates a growth of more than 13% in four years. North Carolina owns more than 250 breweries, with the majority of them located in the south part. Asheville, Charlotte, Durham, Greensboro, the Raleigh area, and Winston-Salem are also some well-known brewery points.

The rising popularity of beer tourism has also boosted the industry's growth. Governments of the countries, such as New Zealand, Australia, China, Mexico, the U.K., and Belgium, have been promoting the craft beer industry for economic development. For instance, Wellington city of New Zealand is an important market for craft beer as these beers are available in unique flavors due to exclusive types of ingredients available in this region.

Various anti-alcohol campaigns are expected to remain major restraints for the industry. Over the past few years, these campaigns have increased the health-consciousness in consumers. Moreover, increased amount of taxation and government regulation of the alcohol industry are expected to limit the manufacturing output, which, in turn, will limit the scope of market growth in the near future.

Flavors & salts was the largest segment and accounted for 43.2% of the global market in 2018. The growing demand for flavored drinks including flavored beer, whisky, and wine is fueling the demand for flavors & salts. The increasing use of fruits as flavor has expanded the portfolio of flavored drinks and attracted new consumers in the past few years. The European countries including France and U.K. are witnessing significant growth in this segment. Major exporter of flavored spirits includes Germany, Spain, U.S., Netherlands, and Jamaica. Popular flavors include vanilla, coffee, honey, chocolate, green apple, citrus, watermelon, and raspberry.

Craft beer market has witnessed a significant growth over the past few years. In terms of sales, craft beer has a 23% share of the U.S. beer industry. U.S. Alcohol and Tobacco Tax and Trade Bureau (TTB) has issued 1,252 new permits in 2018. Major brewers of U.S. include Anheuser-Busch Inbev, MillerCoors, LLC, Constellation, Heineken USA, and Pabst Brewing.

Europe was the dominant region and accounted for more than 35% of the global market share. Rapid expansion of the alcohol industry is driving the product demand in this region. Europe produces more than half of the world’s wine. It is the largest exporter of alcohol in the world with the presence of major producers of the industry. Germany, France, U.K., and Italy are key markets of Europe. 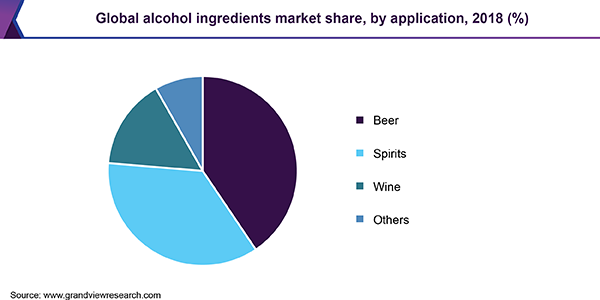 Asia Pacific is projected to witness the fastest CAGR of 9.6% from 2019 to 2025. Increased purchasing power of consumers in the developing countries including China, Taiwan, India, South Korea, Myanmar, Indonesia, Philippines, and Thailand is driving the regional market. China is the largest market in this region owing to rise in product demand, particularly in urban areas. Wine is the most popular category of alcohol in this region. The wine import has witnessed 16% year-on-year growth in 2016. Among still wines, red wine represents 75% of China’s wine market volume.

Major players of this industry include Treatt Plc; Biospringer, AngelYeast Co., Ltd.; Chr. Hansen A/S; DDW; The Color House; Sensient Technologies; The Archer Daniels Midland Company; Döhler; Kerry, Inc.; and Ashland Global Specialty Chemicals, Inc. Product innovation is one of the key strategy adopted by most companies to maintain their market shares. For example, in March 2018, The Coca-Cola Company introduced a new line of flavored alcoholic beverages in Japan, called Alcopop. The alcohol content of this product varies from 3% to 8%.

This report forecasts revenue and volume growth at global, regional, and country levels and provides an analysis of the latest industry trends in each of the sub-segments from 2014 to 2025. For the purpose of this study, Grand View Research has segmented the global alcohol ingredients market report on the basis of product, application, and region:

How big is the alcohol ingredients market?

What is the alcohol ingredients market growth?

Which segment accounted for the largest alcohol ingredients market share?

Who are the key players in alcohol ingredients market?

What are the factors driving the alcohol ingredients market?

b. Key factors that are driving the market growth include growing consumption of alcohol and rapid urbanization in emerging regions like Asia Pacific. Furthermore, increasing number of clubs, pubs, and breweries has also been boosting the market significantly.