The global antibacterial glass market size was valued at USD 142.1 million in 2013 and is projected to expand at a CAGR of 6.7% over the forecast period. Increasing number of hospital acquired infections (HAI) or nosocomial infections is expected to be the key driving force in the industry over the next few years.

Bacteria responsible for HAI include Methicillin-resistant Staphylococcus aureus (MRSA), which is multi-resistant to antibiotics. The primary technique employed to fight against MRSAs includes ensuring basic hygiene such as washing hands as well as environmental cleaning. However, architectural prevention such as using antibacterial glass for constructing hospital areas including isolation rooms and hematology departments is also of key importance. 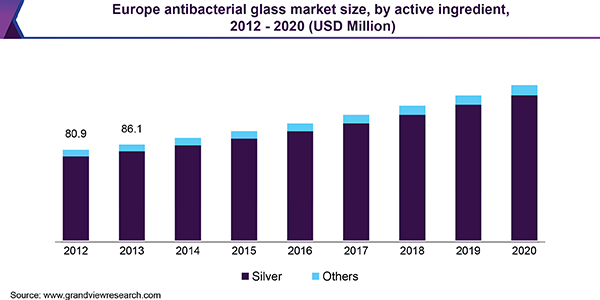 The product is designed to eliminate majority of the bacteria that may form on its surface as well as prevent the spread of fungi. Prolonged contact with surfaces having some strains of harmful bacteria may result in contraction of infection or disease. As a result, antibacterial glass is particularly beneficial in spaces that require a high degree of hygiene and sterile environment, such as hospitals and bathrooms.

AGC Glass Europe patented its antibacterial glass. It involves infusing silver ions into the upper layers of the glass to be rendered antimicrobial or antibacterial in nature. The silver ions inside the glass facilitate the elimination of 99% of all bacteria that form on its surface, while simultaneously preventing the spread of fungi.

The product is also useful in damp locations such as swimming pools, health spas, and sports halls, which are prone to bacterial and fungal development. Low consumer awareness regarding the importance of antibacterial products may be a challenge for market participants over the next few years.

Silver accounted for 92.3% share of the overall revenue in 2013 and is also expected to grow faster than the global average over the forecast period. This can be primarily attributed to its toxicity to a wide range of microorganisms.

Other active ingredients used for coating the glass include copper, zinc oxide, silicon, titanium, and zeolite. Among the aforementioned active ingredients, apart from silver, copper is most frequently utilized owing to its efficiency in contact killing.

Hospitals are expected to be the largest and fastest growing application segment over the forecast period. It accounted for 42.6% share of the overall revenue in 2013. Clear and painted glasses as well as mirrors infused or coated with antimicrobial agents are useful in oncology and geriatric units, burns units, maternity wards, infirmaries, and laboratories.

These products are also used for food and beverage applications, which are expected to witness growth over the forecast period. The product facilitates the prolonged storage of food in glass containers by suppressing the growth and propagation of bacteria and other microorganisms. 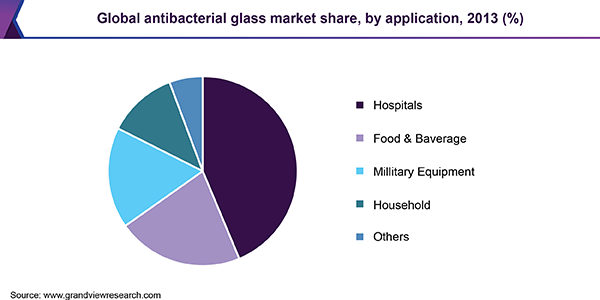 Architectural solutions for preventing bacterial infections in residential buildings by using antibacterial mirrors and surfaces are expected to drive the product adoption in household. The product is also utilized in showers, bathrooms, health spas, swimming pools, and sport centers, where hygiene is of significance.

North America is predicted to grow at a steady rate over the upcoming years owing to growing demand for the product from hospitals. Increased prevalence of chronic diseases and growing aging population are anticipated to create high demand in hospitals, which, in turn, is estimated to boost the growth in North America.

In Asia Pacific, developing economies like China and India are expected to provide lucrative opportunity for the growth. Rising awareness about healthcare and hygiene among the general population and growing healthcare industry are likely to propel the demand for the product, thereby boosting the regional antibacterial glass market growth in future.

The global industry is consolidated in nature, and key industry participants include AGC Glass Europe, Nippon Sheet Glass (NSG), and Saint Gobain. AGC Glass Europe launched its antibacterial glass offering in 2007, which has been tested by university laboratories.

Performance evaluation involved tests on a range of bacteria and fungi including Staphylococcus Aureus, Escherichia Coli, Pseudomonas Aeruginosa, and Aspergillus Niger. U.S.-based Corning launched antimicrobial Gorilla Glass in January 2014, which is formulated with ionic silver in order to inhibit the growth of bacteria, fungi, and mold. Since the company provides Gorilla Glass to major companies such as Apple, Samsung, LG and HTC, this development is expected to positively impact the industry growth over the next few years.