The global antifreeze market size was valued at USD 4.99 billion in 2016. The market is expected to show immense growth over the forecast period owing to the rising automotive sector in emerging economies including India, Mexico, China, Indonesia, and South Korea. Rising usage of antifreeze in heat transfer applications and to prevent engine freezing at low temperatures is expected to drive market demand.

The increasing requirement for protection against corrosion & freezing and effective heat dissipation is likely to fuel the demand. In addition, continuous investments in R&D for the development of efficient, cost-effective, environment-friendly, and low toxic products with a high shelf life by various manufacturers including BP, Shell, and Chevron are expected to create immense market potential over the forecast period.

Asia Pacific is expected to experience significant growth over the forecast period owing to the growing demand for passenger cars and lightweight commercial vehicles in countries including India, Indonesia, Japan, and China. Moreover, the prevalence of major automotive manufacturers in the region including Nissan Motor Company, Toyota Industries, and Komatsu along with increasing government spending in India and China will create immense market potential over the upcoming years.

The easy and abundant availability of various raw materials including ethylene glycol, propylene glycol, and glycerin in India, China, and the U.S. will drive the demand over the forecast period. In addition, the increasing demand in Europe and North America owing to the adverse cold weather conditions is expected to further propel the coolants industry size. However, the fluctuation in raw material price and the regulations on recycling & disposal of these products is likely to hinder the industry growth over the upcoming years.

Automotive was the prominent segment and was valued at USD 2.94 Billion in 2016. The increasing usage of antifreeze in HVAC (heating, ventilation, and cooling) for the automotive and industrial sectors is expected to fuel industry expansion. In addition, factors including favorable government initiatives, rising disposable income, changing lifestyles, and rapid urbanization will further propel market growth over the next eight years.

The aerospace and defense sector is expected to witness significant revenue growth at a CAGR of 6.2% from 2017 to 2025 owing to the immense investments made in aerospace R&D and the presence of abundant players in countries including Germany, France, the UK, Sweden, and Poland. Furthermore, the growing commercial aerospace subsector owing to the accelerated equipment replacement cycle and the increase in passenger travel demand is expected to fuel industry growth.

Ethylene Glycol based antifreeze was the dominant product segment and accounted for 59% of the total volume market share in 2016. The rising usage of ethylene glycol in deicing, prevention of radiator overheating, protection against radiator freezing, and hydraulic brakes are expected to drive the market demand. In addition, increasing usage as a heat conductor in heating & cooling systems is likely to further fuel the market growth.

However, the demand for these products is likely to grow at a slower pace over the forecast period as a result of the stringent regulatory framework regarding coolant disposal & recycling, toxicity, high rate of degradation, corrosive properties, and high cost of storage & handling. 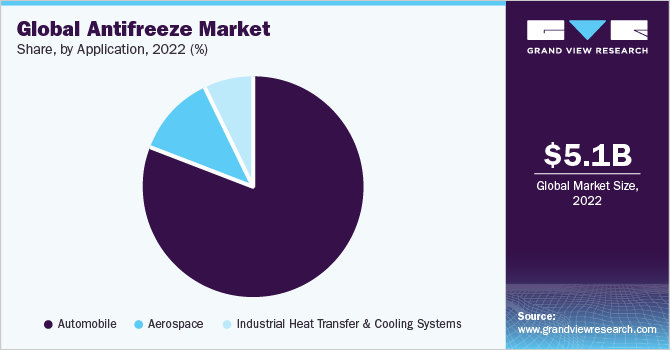 Organic acid technology (OAT) accounted for over 49% of the global volume share in 2015. The OAT is expected to witness the maximum growth over the forecast period owing to the presence of environment-friendly, easily decomposable neutralized inorganic salts and acids. In addition, the extended drain interval of OAT is expected to further propel market growth.

The HOAT market is expected to witness significant demand over the forecast period owing to its extended lifetime and efficient corrosion inhibition. In addition, the excellent coolant to coolant compatibility (can be used as a top-up for both IAT and OAT antifreeze) and the rising usage of HOAT as factory fill by automotive OEMs including Mercedes, BMW, Mini Cooper, and Volvo along with increasing demand in general aftermarket coolant is expected to augment market growth.

Asia Pacific accounted for the largest share in 2015 and is anticipated to show substantial growth considering the increasing demand for passenger cars and light commercial vehicles mainly in China and India.

In addition, the rising automotive sector in various countries including India, China, Indonesia, and Thailand coupled with improving standard of living, consumer awareness levels, and rising disposable income will promote growth over the forecast period. Furthermore, increasing the sale of electric vehicles along with rising investments in R&D for hybrid vehicles is expected to open new growth avenues.

The European market is expected to witness steady growth over the forecast period owing to the increasing automotive manufacturing and aerospace sector. The rising demand for light and heavy commercial vehicles across Europe for freight transportation will fuel the demand for heavy-duty antifreeze.

The global antifreeze market is highly concentrated in nature. The market comprises prominent and well-established players who collectively captured the larger portion of the industry in 2016. The market is highly competitive with all the major players continuously investing heavily in R&D and capacity expansion. The major manufacturers include BP PLC, Royal Dutch Shell, ExxonMobil, Chevron, Total, BASF SE, DOW Chemicals, Old world industries, Prestone, and Amsoil

This report forecasts volume and revenue growth at global, regional & country levels and provides an analysis on the industry trends in each of the sub-segments from 2014 to 2025. For the purpose of this study, Grand View Research has segmented the global antifreeze market on the basis of product, application, and region: