The global artificial urinary sphincters marketsize was valued at USD 386.9 million in 2018 and is anticipated to witness a CAGR of 6.6% over the forecast period. Increasing prevalence of stress, urge urinary incontinence (UI) in males as well as females, and rising healthcare expenditure in developing countries are few factors driving the market for artificial urinary sphincters.

Artificial Urinary Sphincter (AUS) is a silicon rubber device that is surgically implanted to treat severe UI in males as well as females. Urinary incontinence is of three types such as stress incontinence, urge incontinence, and mixed incontinence. AUS works like a natural urinary sphincter that controls or restricts urine flow out of the bladder. 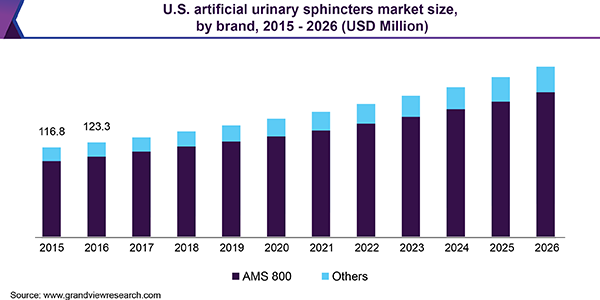 Increasing investments by the healthcare companies along with government funding is promoting the research activities, which in turn boosts the market for artificial urinary sphincters. According to India Brand Equity Foundation, pharma giants in India such as Sun Pharma has increased its R&D expenditure from 9.1% in 2015 to 23% in 2016. In addition, key market players such as Boston Scientific Corporation has increased their research and development expenditure from USD 997 million in 2017 to USD 1.1 billion in 2018.

According to the Organization for Economic Co-operation and Development (OECD), in 2018, the U.S. ranks highest in the healthcare spending among the developed nations of the world. Thus, increasing investment in the research and development and rising health care expenditure in countries such as the U.S., Germany, and Switzerland are primarily driving the market for artificial urinary sphincters.

Bladder and Bowel Foundation, and Education and Resources for Improving Childhood Continence (ERIC) have together launched an awareness campaign named “Love your Gusset”, aimed to raise awareness about the stress UI in women. World Federation of Incontinence Patients (WFIP) started an annual initiative World Continence Week (WCW) with the approval of International Incontinence Society. WCW is the initiative started at the global level for spreading awareness about bladder weakness, urinary incontinence, and other conditions. Thus, increasing awareness initiatives by various organizations about urinary diseases and rising prevalence of UI are few more factors driving the market for artificial urinary sphincters.

AMS 800 dominated the overall market for artificial urinary sphincters owing to its special characteristics such as it is considered best for the treatment of Stress Urinary Incontinence (SUI) in males. This device consists of three main components which include control pump, occlusive cuff, and a pressure-regulating balloon, which are filled with sterile solution and connected with a tubing. Furthermore, factors such as highly durable, effective, and safe surgical option for the treatment of SUI in males, and high satisfaction rate among men are also contributing to market growth.

On the basis of brands, the others segment is expected to exhibit highest CAGR during the forecast period. The others segment includes brands such as ZSI 375 and FlowSecure. Factors such as easy to implant, adjustable to the patient’s continence needs, and low risk of mechanical failure are attributing towards the increasing demand of the other artificial urinary sphincters over AMS 800 in the forecast period.

Based on end use segment, the male segment dominated the artificial urinary sphincters market owing to increasing number of male patients suffering from SUI. Mostly older males who are above 55 years of age are more to develop this disease. According to the Global Forum on Incontinence, 5% of men, around 121 million people around the globe are suffering from some type of urinary incontinence. Thus, increasing number of patients suffering with UI after getting their prostate surgery and other symptoms are majorly driving the market for artificial urinary sphincters. 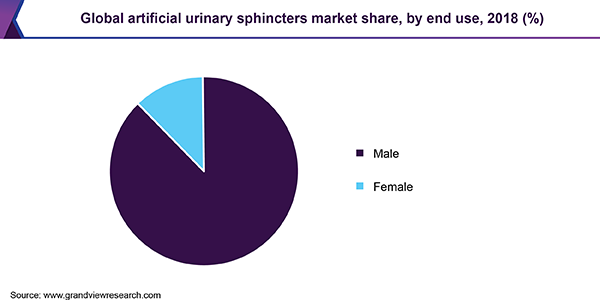 The female segment is expected to witness the highest CAGR in the future owing to increasing awareness among female about the artificial urinary sphincters and increasing number of urge UI cases in women. UI is the major issue for abnormal health in women nowadays. There are several reasons such as pregnancy, childbirth, and menopause which are contributing towards growing UI in women. However, overactive bladder muscles and weak bladder muscles may also cause UI in women. UI is a common issue in the older population as compared to the younger population. Thus, increasing female geriatric population suffering from UI is primarily driving the demand for artificial urinary sphincters among women.

North America dominated the market for artificial urinary sphincters owing toincreasing incidence of UI in this region, rising awareness program, and presence of well-established healthcare facilities in the region. Currently, almost 13 million Americans are incontinent out of which 85% of the population are women. In the U.S., prevalence of incontinence increases in women above the age of 50 years. More than 50% of geriatric American population suffers from stress and urge urinary incontinence. Thus, increasing number of patient suffering from UI is primarily driving the market for artificial urinary sphincters.

Asia Pacific is expected to witness the highest CAGR in future due to the rising government healthcare spending, increasing government initiatives, and awareness campaigns by various organizations regarding urinary diseases. For instance, in India, World kidney Day is being celebrated on 14 March every year that aims to encourage and adopt healthy lifestyles so that kidney, as well as urinary diseases, can be prevented. Thus, these factors are expected to boost the growth of the market during the forecast period.

The major players in the industry comprise of Boston Scientific Inc.; GT Urological; RBM-Med; ZEPHYR Surgical Implants; and Albyn Medical, Ltd. These key market players are focusing on the launch of innovative types of artificial urinary sphincters, growth strategies, and technological advancements. For instance, AMS 800 urinary control system of Boston Scientific is specially used for male SUI. According to Boston Scientific Corporation facts, about 150,000 patients have been treated with AMS 800 after getting caused by SUI.

This report forecasts revenue growth at global, regional, and country level and provides an analysis of the latest industry trends in each of the sub-segments from 2015 to 2026. For the purpose of this study, Grand View Research has segmented the global artificial urinary sphincters market report on the basis of brand, end use, and region: