The Asia and Europe steel rebar market size was valued at USD 155.4 billion in 2020 and is expected to expand at a compound annual growth rate (CAGR) of 7.8% from 2021 to 2028. Governments in various countries are focusing on the expansion of infrastructure through the development of bridges, highways, and tunnels, which is projected to provide new opportunities for steel rebar vendors over the coming years. For instance, The Atal Rohtang Tunnel in Himachal Pradesh that came into service in October 2020 is one of the longest road tunnels in India that has reduced 46 km of distance between Leh and Manali. 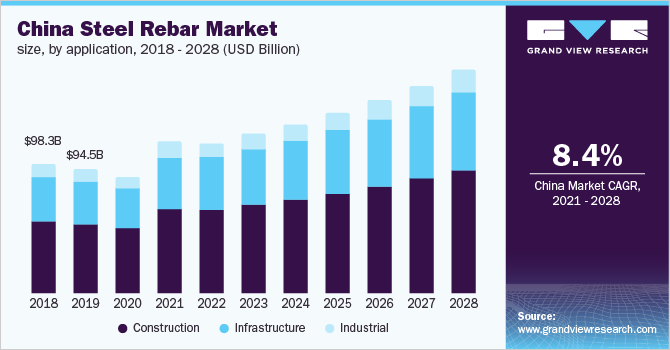 The Steel Authority of India (SAIL) provided 6,500 tons of TMT rebars and 1,500 tons of structural steel for this project. Similar projects are underway across Asia and Europe, which are projected to fuel market growth over the coming years. China is projected to remain a key consumer in Asia’s steel rebar industry. The country accounted for a volume share of around 72.0% in regional demand. Through its five-year action plan, China is also focused on the improvement of a high-speed rail network, waterway 5G networks, new airports, data centers, charging stations for EVs, gateway airports, and international aviation hubs.

Moreover, under the 13th economic action plan, China would increasingly focus on the development of smart cities. The country has emerged as a hub for high-rise buildings worldwide. As of the first half of 2021, there are about 2,582 buildings in China that are over 150 meters tall while a number of new high-rise buildings are under construction. These buildings are likely to attract steel rebar demand for reinforcing applications. The flourishing real estate sector in the country is further anticipated to augment the growth of the market for steel rebar in China. According to the National Bureau of Statistics of China, investments in real estate rose by 38.3% on a year-on-year basis in the first two months of 2021, reaching USD 215.2 billion (CNY 1.39 trillion). Of these total real estate investments, the residential sector of the country witnessed a growth of 41.9% in the same period.

The construction application segment dominated the market for steel rebar in Asia and Europe and accounted for the largest revenue share of 59.0% in 2020. Rebar products are widely utilized in commercial and residential buildings owing to their high strength and low weight, which reduces the load on the building foundations and improves economic savings. Low interest rate for housing as a result of the pandemic is projected to push the demand over the short term. In Q1 2021, the investment in European residential construction increased by 23% compared to Q1 2020, reaching EUR 11.4 billion (~USD 13.18 billion).

The investments are being supported by ongoing structural shifts in both demographics and lifestyles. Thus, growing investments in residential construction across different parts of the world are anticipated to propel the market growth over the next eight years. Emerging economies of Asia such as India and ASEAN are witnessing increasing investments in the infrastructure sector owing to increasing urbanization, rising income per capita, and growing population. Furthermore, heavy allocation by governments to improve the infrastructure post-COVID-19 is projected to remain a key contributor to the market for steel rebar in Asia and Europe. For instance, in August 2021, the Indian government has announced its plan to invest around USD 1.4 trillion in national infrastructure.

Asia held the largest revenue share of more than 79.0% in 2020 of the Asia and Europe steel rebar market. The region is also anticipated to register the fastest growth rate over the forecast period. Rising construction activities in the region, along with increasing penetration of steel rebar in residential and non-residential applications are likely to further fuel the product demand, especially in emerging economies of the region. Increasing investments by the government of developing countries such as China and India in massive infrastructure projects is driving the market in the region. 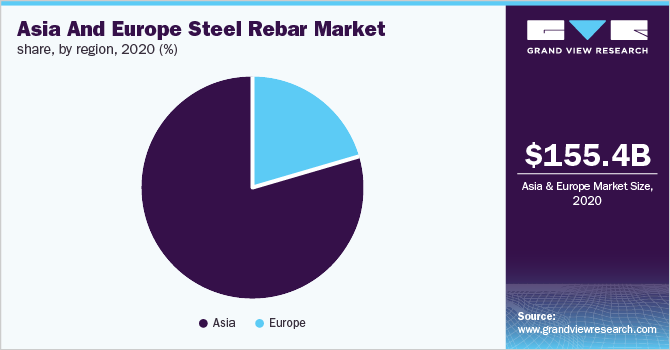 As per the ASEAN investment report 2021, Foreign Direct Investment (FDI) in the ASEAN reached its highest level in 2019 at USD 182.0 billion. The region became the largest FDI recipient among developing countries. These investments were mostly observed in infrastructure and digital technology industries. Thus, with the rise in FDI in infrastructure, steel rebar demand is projected to grow over the coming years. Europe steel rebar market is projected to grow owing to expansion of the industrial application segment, which is projected to increase on account of the rising construction of warehouses, storage units, and manufacturing facilities. The investments in logistics in Europe rose to EUR 38.64 billion (~USD 46.5 billion) in 2020, which is the highest recorded since 2013.

Most of the market players are focused on the development of steel for downstream sectors such as construction, automotive, and transportation. The players are focused on capturing new contracts from various end-use industries. The market for steel rebar in Asia and Europe is fragmented with the presence of both established and small-scale players. These players give tough competition to other small players by adopting strategies such as joint ventures, capacity expansion, and product innovation.

The market for steel rebar in Asia and Europe also witnessed price surge for its products lately. For example, in May 2021, steel rebar prices in Northern Europe reached USD 825.09 per ton from USD 532.6 per ton monthly average in May 2020. The hike was led by strong demand and short supply of steel rebar in the region. However, as global companies focus on increasing their production in the coming years, prices are likely to get stable over the short term. Some of prominent players in the Asia and Europe steel rebar market include:

This report forecasts revenue and volume growth at the regional and country levels and provides an analysis of the latest industry trends in each of the sub-segments from 2017 to 2028. For the purpose of this study, Grand View Research has segmented the Asia and Europe steel rebar market report on the basis of application and region:

How big is the Asia and Europe steel rebar market?

What is the Asia and Europe steel rebar market growth?

Which segment accounted for the largest Asia and Europe steel rebar market share?

b. Based on region, Asia was the largest market with a revenue share of over 79% in 2020, owing to expansion of infrastructure sector through private and public investments.

Who are the key players in the Asia and Europe steel rebar market?

What are the key factors driving the Asia and Europe steel rebar market?

b. Key factors that are driving the Asia and Europe steel rebar market are rising demand for housing post COVID-19 slowdown amidst decline in interest rate and moderate expansion of industrial segment.