The Asia Pacific In Vitro Diagnostics market was estimated at USD 12.1 billion in 2015. The increase in number of infectious and chronic diseases, the rising awareness levels of advanced diagnostic solutions as well as technological developments are estimated to be some major factors propelling the growth of the in vitro diagnostics market in the Asia Pacific region. Though the IVD industry in Asia Pacific comprises a smaller market share, it is projected to exhibit rapid global growth in the next few years at the highest compounded annual growth rate.

Factors responsible for regional growth are the fast-growing economies such as that of India and China, and a surge in the following areas, demand for technologically advanced diagnostic devices, per capita income, gross domestic product, and disposable income. Other factors influencing the growth of the regional market are increasing use of point-of-care testing, aging population, and the rising demand for personalized medicine. 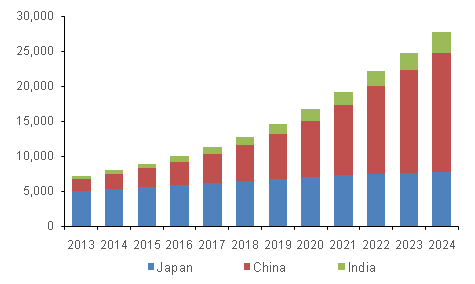 The diagnostic and pharmaceutical industries are rapidly expanding due to the demand for personalized medicines. In addition to this, a new variety of condition-specific markers, advanced genomics, and proteomics-based tests, the increasing investment in emerging countries are producing new opportunities for this market. However, factors such as stringent regulatory policies, limited reimbursement, and an inadequate healthcare budget are expected to hinder the growth of the market in certain regions of Asia Pacific.

Based on product type, the market is segmented into reagents, instruments, and services. In the Asia Pacific region, the segment for reagents is estimated to be the largest in the year 2015 followed by the instruments segment. The growth of the segment is attributed to the extensive use of reagents, as well as the availability of a wide range of diagnostics kits.

Based on technology, the market is further categorized into immunoassays, clinical chemistry, hematology, molecular diagnosis, microbiology, and coagulation among others. The molecular diagnostics segment is anticipated to witness a swift growth during the forecast period. The increase in adoption of the molecular tests for the majority of the diseases are attributed to factors, such as rapidity of testing, improved accuracy, as well as increased specificity.

On the basis of application, the industry is categorized into infectious diseases, oncology, cardiology, nephrology, autoimmune diseases, HIV, and drug testing. The infectious diseases segment is estimated to be one of the largest revenue generating segment due to the rise in a number of infectious diseases, such as hospital-acquired infections, influenza, hepatitis, and streptococcus infections among others in the region.HIV is estimated to be a major concern in the region and the increasing incidences of HIV have triggered several technological advancements in the IVD market. Additionally, the rising adoption of self-testing kits, the rising awareness amongst individuals regarding the availability of these technologically advanced diagnostics, the presence of unmet healthcare needs in the low-income regions, as well as favorable government initiatives are estimated to boost the market growth.

Based on end-user application, the industry is segmented into hospitals, laboratories, homecare diagnostics, and others. Homecare diagnostics is anticipated to be one of the fastest-growing segments in the industry. The increasing number of initiatives to reduce hospital stays, the growing demand for rapid diagnostic tests, and the growing geriatric population base is estimated to support the growth of the market.

The three largest IVD markets majorly dominating the Asia Pacific region are Japan, India, and China. Since 2015, Japan is estimated to lead the IVD market followed by China and India. In terms of growth rate, the Chinese IVD industry is anticipated to witness rapid growth in the next few years. This market is projected to grow at a CAGR of over 22.6% during the forecast period. The growth of this industry in China is attributed to certain key factors that include the increasing healthcare expenditure, GDP growth, the rising population base, increased medical coverage, as well as high demand in the testing of outpatients. Following China, the Indian IVD market is anticipated to witness a significant upsurge during the period of 2016 to 2024.

The major competitors identified in this market include Danaher Corporation, Affymetrix, Inc., Abbott Laboratories, Inc., Alere, Inc., Roche Diagnostics, Becton, Dickinson and Company, Bio-Rad Laboratories, Inc., BioMerieux, Inc., Siemens Healthcare Diagnostics, Inc., Vela Diagnostics, Inc., and others. Agreements, collaborations, partnerships, and product launches are the key strategies, which are implemented by the market players to attain growth in the market. To acquire significant shares and gain sustainability in the market, the companies were majorly involved in the development of new products through extensive R&D activities. For instance, in March 2016, Cepheid announced its FDA approved test ‘XpertCarba-R’, an in vitro diagnostic test that enables effective identification of carbapenem resistance genes.