The global assisted reproductive technology market size was estimated to be around USD 21 billion in 2017 and is anticipated to grow at a CAGR of 10% over the forecast period. Contributing factors to the growth are the increasing number of infertility cases due to obesity, growing stress, and pollution, increasing number of smokers, fertility threatening treatments such as chemotherapy, and favorable regulatory framework. The removal of tag “experimental” from egg freezing by the American Society for Reproductive Medicine (ASRM) is also projected to accelerate the growth of the market. 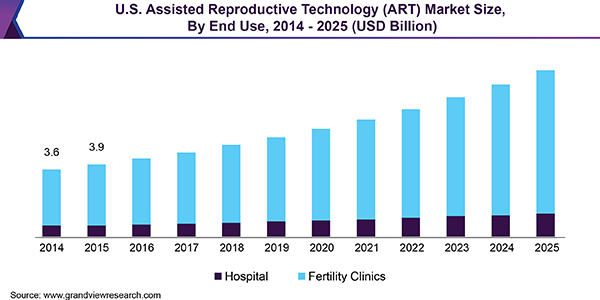 According to the WHO, the fertility rate per woman has reduced from 5 in 1960 to 2.5 in 2012. Such a decline in fertility rates has given rise to rapid growth in demand for ART procedures. Growing stress levels is also identified as a key driving factor for the industry.

Technological advancements are also one of the contributing factors for market growth. In January 2018, VitriCell SA announced the closure of USD 1.2 million. These funds are expected to enable the company to introduce products based on aseptic vitrification (new cell cryopreservation technique). This is expected to have a positive impact on the ART market in the coming years.

ART market, by procedure, is categorized into frozen non-donor, frozen donor, fresh non-donor, and fresh donor. Fresh non-donor held the largest revenue share in 2017. However, frozen non-donor is expected to witness lucrative growth over the forecast period. According to 2010 and 2012 data by the CDC, in the U.S., out of the different cycles available, fresh non-donor led the market with the maximum number of cycles performed that year. IVF with ICSI was most widely used in case of fresh non-donor eggs or embryos followed by IVF without ICSI.

According to 2003-2012 trends by the CDC, the number of fresh nondonors banking the eggs/embryos for future use has been increased considerably. The frozen method has an advantage over fresh methods as it is less expensive and the recipient does not have to go through the drug stimulation process and is less invasive. Many reimbursement policies have also encouraged more people to donate or store their gametes. Also, Medical Egg Freezing (MEF) is recommended for women at risk of losing fertility owing to cancer treatment and other fertility threatening diseases.

Where other centers offer risk sharing plans and refund only for 3 cycles, the advanced fertility center of Chicago has designed the IVF refund plan where it allows 100% refund up to 4 cycles with fresh embryos. Moreover, giant players such as Apple and Facebook have started offering perks to women employees to store their sperms to decrease the attrition rate. This will help career-oriented women to maintain a work-life balance.

In-vitro fertilization dominated the market in 2017. Favorable reimbursement policies and the introduction of new technology are some factors contributing to market growth. For instance, in June 2015, Adelaide University in Australia came up with BlastGen technology. Though this technology was under clinical trials it had presented convincing results and its commercialization is expected to increase the success rate in women who had failed IVF treatment. 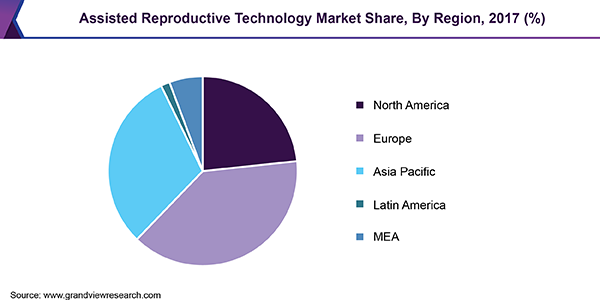 Standardization of procedures through automation, regulatory reforms, and government funding for egg/sperm storage are some of the contributing factors of the IVF market. The government provides funds for experiments, which can help patients with better success rates and economic costs. For instance, the Toronto Centre for Advanced Reproductive Technology (TCART) was the first Canadian Clinic to provide free IVF to 60 women to experiment with the AUGMENT rejuvenating technique. The technique allowed older cells to rejuvenate by taking smaller cells from the outer ovary lining. This process allowed the harvesting of young cells and higher treatment success rates.

Europe dominated the market in 2017 due to a rise in infertility rate, rising awareness among people for fertility treatment, technological advancements, and government initiatives. In June 2014, CDC developed a national public health action plan for detection, improved efficacy of safe treatment, and prevention of infertility. The Barcelona summit suggested the establishment of an expert group to solve demographic issues, increase the childcare facilities, and acceptance of parent IVF procedure for clinical trials. Spain and Italy are other countries with a wide acceptance of assisted reproductive technology procedures. As per update of 2017, a lesbian couple and single women in France are expected to have access to the ART in the coming years

North America is also expected to witness growth in the coming years. This is due to people's awareness about various fertility options, government support for the in-vitro fertilization, and various technological and procedure up-gradation. For instance, in August 2015 Ovascience’s treatment named AUGMENT has been reported to have rejuvenated women’s aging egg cells and provided benefits to eggs with poor quality. In February 2015, the scientist of U.S. who invented the three-parent IVF procedure requested the Food and Drug Administration (FDA) to grant permission for its clinical trials as age-related infertility

Asia Pacific is expected to be the fastest-growing market in the coming years. The drivers for Asia Pacific region are late family planning and comparatively lower treatment cost. Asia Pacific Initiative on Reproduction (ASPIRE), held on 4th April 2014, was to provide guidance to the healthcare professionals on how to assist the patients on various infertility treatments and to increase the quality of patient care.

Technological advancements is expected to drive the Australia ART/ fertility market over the forecast period. In March 2018, it was reported that a smart TV app is used by the Monash IVF to consult fertility patients in China after the clinic entered into an agreement with AC International Medical Tourism (Melbourne), which targets the Chinese market. Monash IVF, a fertility clinic in Melbourne, entered into a partnership with platform BabySmart, which enables the Chinese patients to have face to face consultation with the clinicians in Australia.

This report forecasts revenue growth and provides an analysis of the industry trends in each of the sub-segments from 2014 to 2025. For the purpose of this study, Grand View Research has segmented the Assisted Reproductive Technology (ART) market based on procedure, technology, end use, and region: