The global automotive e-axle market size was valued at USD 6,405.1 million in 2018 and is expected to register a CAGR of 23.7% from 2019 to 2025. The market is primarily driven by the growing sales of battery electric vehicles along with the growing adoption of automotive e-axles in the light commercial vehicle segment. Furthermore, the introduction of automotive e-axles for heavy commercial vehicles and increasing investments in the R&D of electric vehicles have led to improvements in the design of e-axles. Modular e-axle design has enabled automotive manufacturers to increase the battery capacity of the vehicles, thereby enhancing the driving range with a single charge.

The growing demand for lightweight, structurally safe, and cost-effective chassis & automotive systems has compelled manufacturers to focus on the development of technologically-advanced products. For instance, AxleTech has developed an integrated e-axle, which delivers higher performance within a smaller packaging. The e-axle is primarily suited for medium and heavy-duty commercial trucks. 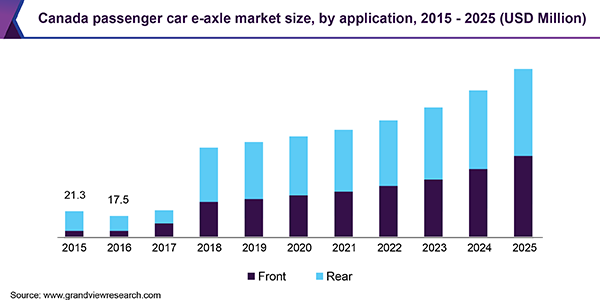 Technological advancements in recent years have empowered manufacturers to roll out electric vehicles with extended range in a single charge. Although the average driving range has potential for further refinement, the current improvement in driving range is expected to significantly impact market growth for automotive e-axle. Moreover, regulatory and policy reforms by various governments globally have amplified the adoption of electric vehicles, resulting in increased sales of automotive e-axles. The Zero-emission Vehicles (ZEV) resolve and complementary policy changes by the European Union to roll out all-electric passenger cars by 2030 are expected to positively impact the European market for automotive e-axle during the forecast period.

The front passenger car e-axle segment accounted for the dominant share in the market for automotive e-axle in 2018. The segment is expected to reach USD 14,219.6 million by 2025, registering a CAGR of 26.3% from 2019 to 2025. This can be attributed to the increasing production of entry- and mid-level electric passenger cars in cost-sensitive economies. The rear e-axle segment is expected to show good growth potential during the forecast period amid technological advancements in commercial vehicles. 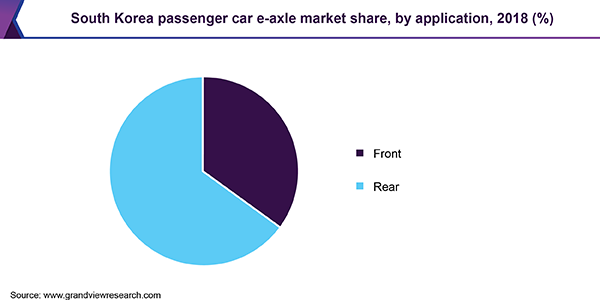 The adoption of e-axles in commercial vehicles is a key factor influencing the market growth and application diversification. Their growing adoption in commercial vehicles would provide the manufacturing ecosystem with a positive boost and draw considerable investments to enhance R&D capabilities. This would eventually benefit the industry and its end users with highly sophisticated and technologically refined commercial vehicle e-axles.

The Asia Pacific passenger car electric axle drive marketwas valued at USD 3,160.1 million in 2018, holding the majority of the market share. Developing economies such as India, China, and industrialized nations such as Japan and South Korea are likely to help the region retain its dominance over the forecast period. The European region has been one of the early adopters of electric vehicles. Also, the region witnessed sluggish growth in conventional fuel vehicle production in the recent past.

The European electric axle market is anticipated to witness improved growth over the forecast period, amid changing regulations to motivate ZEVs. The North American region is estimated to witness significant changes in dynamics of passenger vehicle production. The shifting preference of the U.S. population from high horsepower vehicles and large SUVs to compact electric cars is expected to further drive market growth for automotive e-axle in the region.

Key players operating in the market for automotive e-axle include Dana Incorporated, Melrose Industries PLC, and Robert Bosch GmbH. Increasing investments are being made by these companies in the e-axle technology, which can be attributed to the diversified customer base. The market is currently consolidated and is dominated by a few key players, such as Dana Incorporated and Robert Bosch GmbH. However, investments by other prominent players and startups have also increased over the recent past. Other leading vendors operating in the industry include Schaeffler AG, ZF Friedrichshafen AG, and Continental AG.

This report forecasts revenue growth at global, regional, and country levels and provides an analysis on the latest industry trends in each of the sub-segments from 2015 to 2025. For the purpose of this study, Grand View Research has segmented the global automotive e-axle market report based on vehicle type, namely passenger car segment and commercial vehicle segment. The passenger car e-axle segment has further been segmented based on application and region, whereas the commercial vehicle e-axle segment has been sub-segmented based on region: