The global electric passenger cars market size was valued at USD 120.81 billion in 2020 and is expected to expand at a compound annual growth rate (CAGR) of 32.5% from 2021 to 2028. Worldwide, the sales of passenger cars dipped considerably as the automotive industry bore the adverse effects of lockdown restrictions caused by COVID-19 in the first half of 2020. However, amidst this chaos, the market had a milestone year with sales reaching approximately 3.0 million units in 2020, almost a 40% increase over 2019. China with the government’s support was a major market disrupter with the success of WulingHongguang Mini EV and  Tesla Model 3. The country captured over 30% of the global electric car sales in 2020 and will continue to witness great momentum supported by the growing network of public EV charging infrastructure and an anticipated rise in consumer demand over the forecast period. 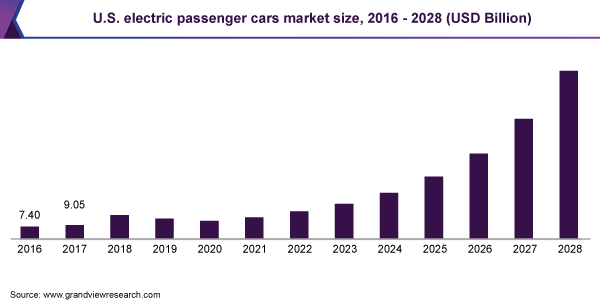 The adoption of electric vehicles has gained traction in several countries due to the increasing fuel prices. Electric vehicles act as a substitute for petrol and diesel vehicles and are powered by lithium-ion batteries that offer a hybrid charging facility. Numerousride-hailing companies are focused on replacing their internal combustion engine fleet with electric vehicles. For instance, Uber India plans to have around 3,000 electric vehicles in its fleet by the end of 2021.

The outbreak of the COVID-19 pandemic has changed the overall business scenario for 2020 as well as the following years. Several industries have witnessed a significant setback due to the pandemic, and the automobile industry is no exception to that. However, electric passenger cars witnessed a high demand during the pandemic period. The global electric passenger car sales increased by over 40% in 2020 as compared to 2019. The production operations of most companies were affected owing to the lockdown. However, the adoption of electric passenger cars surged post-lockdown owing to the increasing initiatives by government authorities to encourage the use of low emission fuel vehicles.

The battery electric vehicle segment accounted for the largest revenue share of over 60% in 2020 and is expected to maintain its dominance over the forecast period. As of 2021, more than 15 BEV models are available in the U.S. Compared to PHEV, BEV is expected to witness a more modest growth, primarily due to range anxiety. In the BEV segment, Tesla Model S with an improved range is popular, whereas model 3 with low cost per km is the most efficient. The vendor accounted for over 70% of the BEV sales in 2020. 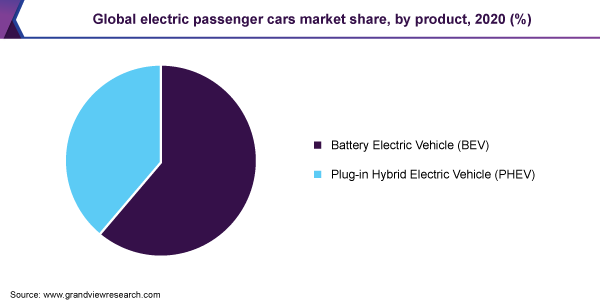 The plug-in hybrid electric vehicle segment is projected to register the highest CAGR of over 32% in terms of revenue over the forecast period. This growth can be attributed to the initiatives taken by government authorities across the developed and emerging economies to promote the use of EVs. PHEVs use batteries to power the electric motor and alternative fuel to power the internal combustion engine. Companies such as Volkswagen Group are focusing on increasing their plug-in electric car sales. In January 2020, the company announced an increase of about 60.0% in its plug-in electric car sales compared to 2018.

The European market accounted for the largest revenue share of over 45% in 2020. The high revenue share is mainly attributed to the increasing electric passenger car sales in countries such as Germany, France, Norway, and the U.K. Governments in the European countries have increased subsidies for electric vehicles as a part of their initiatives to counter the effects of the pandemic. For instance, in Germany, the government increased subsidies by around USD 2,500 and USD 1,500 on the purchase of BEV and PHEV, respectively.

North America is estimated to register the second-highest CAGR of over 39% in terms of revenue from 2021 to 2028. The U.S. accounted for the largest revenue share in 2020 and is expected to continue its dominance over the forecast period. However, electric vehicles in the U.S. witnessed declined sales in 2019 and 2020 as the federal tax credit was decreased for General Motors Company and Tesla.

The market is highly competitive with the presence of several global as well as regional players. In 2020, the market was dominated by Tesla, SAIC Motor Corporation Limited, TOYOTA MOTOR CORPORATION, General Motors Company, Nissan Motor Company, and Volkswagen AG, among others. Organic growth remains the key strategy for the overall industry, with a major focus on product launches to meet consumer demands and expand product offerings. For example, in April 2021, TOYOTA MOTOR CORPORATION announced the launch of LS and Mirai in the Japanese market, which are offered with advanced driving assist technology.

Market players also focus on partnerships and joint ventures to increase the adoption of electric vehicles. For instance, in April 2020, BYD Company Ltd. and TOYOTA MOTOR CORPORATION signed an agreement to form a new company named BYD TOYOTA EV TECHNOLOGY CO., LTD. The newly formed company conducts research and development of BEVs. Some of the prominent players operating in the global electric passenger cars market are:

This report forecasts the volume and revenue growth at global, regional, and country levels and provides an analysis of the latest industry trends in each of the sub-segments from 2016 to 2028. For this study, Grand View Research has segmented the global electric passenger cars market report based on product and region:

How big is the electric passenger cars market?

What is the electric passenger cars market growth?

b. The battery EV segment accounted for the largest revenue share of over 60% in 2020 and is expected to maintain its dominance over the forecast period in the electric passenger cars market.

Who are the key players in the electric passenger cars market?

What are the factors driving the electric passenger cars market?

b. The European electric passenger cars market accounted for the largest revenue share of over 45% in 2020.