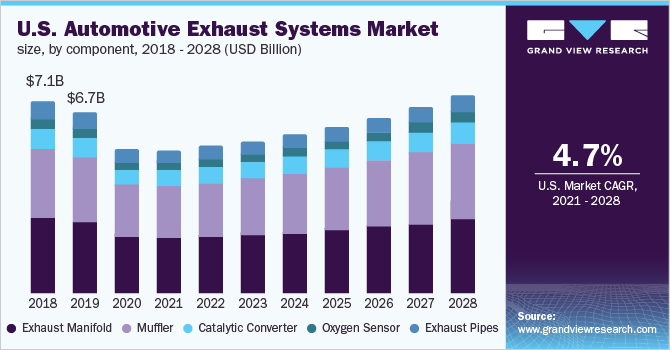 Governments across the globe are imposing stricter regulations for vehicular emissions in an attempt to reduce environmental impacts associated with the automotive industry. Such regulations are compelling component suppliers to produce high-efficiency and environment-friendly automotive exhaust systems for domestic and international markets.

Moreover, increasing disposable incomes across various sections of society have led to the growth of the automotive industry in the developed economies of Europe, such as Italy, the Netherlands, and France. The demand for passenger and commercial vehicles is also expected to rise in regions such as the Asia Pacific, the Middle East and Africa, and Latin America, which is expected to strengthen the growth prospects of the automotive exhaust systems market.

The COVID-19 pandemic has impacted the demand for automotive exhaust systems in 2020. The spread of the virus has resulted in lockdowns and social distancing globally, leading to losses for industries such as manufacturing, automobile, entertainment, restaurant, and hospitality. This slumped business scenario is anticipated to negatively impact automotive production as well as the demand for automotive exhaust systems. The overall automotive production volumes declined globally on a year-on-year basis, mainly due to the decreased production volumes in North America and Europe, among other regions. According to OICA, global automotive production dropped by over 15% year-over-year to 77.6 million units. However, as governments begin to gradually relax the lockdown norms and allow businesses to operate with mandates of social distancing, the market can expect a period of respite for the short-term due to the growing demand for cars from the middle-class populations.

Based on components, the market has been segmented into the exhaust manifold, muffler, catalytic converter, oxygen sensor, and exhaust pipes. In 2020, the exhaust manifold segment accounted for a dominant share of around 39% and is estimated to expand at a significant CAGR over the forecast period due to its high price compared to other components.

The muffler segment is projected to register the highest CAGR of over 7.0% over the forecast period, accounting for a majority of the sales of automotive exhaust system components by 2028. As emission norms get stricter, automotive OEMs are focusing on incorporating efficient exhaust systems to curb noise pollution levels and reduce toxic emissions. In 2020, Hyundai launched Creta mid-SUV equipped with a dual-exhaust muffler system.

Based on fuel type, the market has been segmented into gasoline and diesel. The gasoline segment accounted for the largest revenue share of around 80% in 2020 and is anticipated to maintain its dominance over the forecast period. In the emerging economies, 9 out of 10 vehicles are equipped with an internal combustion engine. While the popularity of electric vehicles in regions such as North America and Europe has dwindled ICE vehicle sales, limited electric vehicle infrastructure in emerging countries continues to contribute to the growing sales of gasoline-driven vehicles. 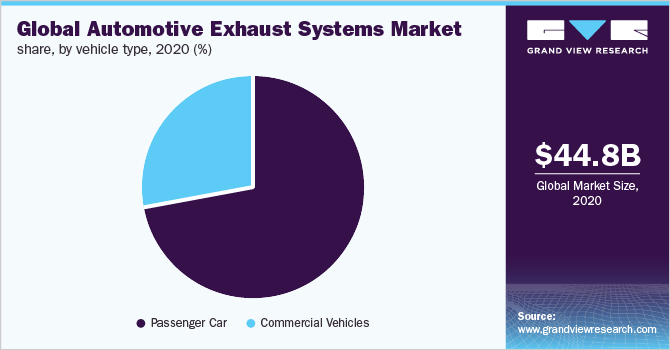 The commercial vehicles segment is projected to expand at the highest CAGR of over 8.0% from 2021 to 2028. The growth can be attributed to the increasing demand for heavy trucks across the logistics and transportation sectors. Logistics is one of the key end-use industries for commercial vehicles. The use of trailers and trucks for the transportation of goods is increasing rapidly. With changing lifestyles and urbanization, people are more inclined toward getting the goods and products delivered to them.

In 2020, Asia Pacific captured around 60% of the automotive exhaust systems demand and is estimated to register a CAGR of over 7.0% from 2021 to 2028. This can be attributed to the increasing technological awareness and spending capacity of customers in the region. Moreover, the evolving automotive industry in emerging economies such as China and India is expected to drive the growth of the market. The Make In India campaign is expected to draw substantial investments in the automotive sector as India offers several benefits, such as low-cost labor and cheaper raw materials. India and China comprise large supply chains & logistics networks and are among the fastest-growing economies globally. The growing e-commerce industry in the region is also anticipated to boost the demand for commercial vehicles over the coming years.

The Latin American region is projected to expand at the second-highest CAGR of over 6.8% over the forecast period. The increasing automotive production and sales across countries such as Brazil and Mexico are expected to support the growth of the regional market. Brazil is the largest automotive producer in South America and accounts for almost 50% of vehicles sold in the region. The country also ranks eighth in the world for automotive production. Its automotive industry comprises over 5.5% of the overall GDP of the country, contributing over BRL 266 (USD 52.5) billion. Meanwhile, Mexico is the sixth-largest passenger car manufacturing country globally and the fifth-largest producer of auto parts.

The market is moderately consolidated with the presence of several global and regional players. In 2020, the market was dominated by Faurecia;  Boysen; BENTELER International;  Inc.; and Continental AG, among others. Organic growth remains the key strategy for the overall industry, focusing on product launches to expand product offerings and meet consumer demands. For example, in February 2020, Tenneco Inc.’s Walker Emissions Control announced the launch of a new replacement catalytic converter called Walker CalCat and a muffler called Walker Ultra in North America.

Market players also focus on expansion to increase their presence across untapped markets. For instance, in March 2021, Eberspacher announced the opening of a new plant for exhaust technology in Ramos Arizpe, close to Saltillo, Mexico. The start of the new plant is part of the company's expansion strategy in North America. Some of the prominent players operating in the global automotive exhaust systems market are:

This report forecasts revenue growth at global, regional, and country levels and provides an analysis of the latest industry trends in each of the sub-segments from 2016 to 2028. For this study, Grand View Research has segmented the global automotive exhaust systems market report based on component, fuel type, vehicle type, and region:

How big is the automotive exhaust systems market?

What is the automotive exhaust systems market growth?

b. The Asia Pacific dominated the automotive exhaust systems market with a share of 59% in 2020. This is attributable to the increasing technological awareness and the spending capacity of customers in the region.

Who are the key players in the automotive exhaust systems market?

b. Some key players operating in the automotive exhaust systems market include Faurecia, Friedrich Boysen, BENTELER International, Tenneco Inc., and Continental AG, among others

What are the factors driving the automotive exhaust systems market?

b. Key factors that are driving the automotive exhaust systems market growth include stringent government standards associated with carbon emission and increasing sales of passenger and commercial vehicles globally.