The global automotive lubricants market size was estimated at 22,858.5 kilo tons in 2016. Growing demand for lightweight and high-performance vehicles in emerging economies such as China and India along with increasing disposable income across the globe is expected to be a key factor driving the market growth.

Engine oil is anticipated to witness a rapid growth rate owing to increasing passenger cars per 1,000 populations, increasing mobility on account of urbanization, growing per capita income, growing aspiration of possessing a vehicle, and the demand for goods carriers from small and medium-sized enterprises.

Engine oils are widely used to inhibit corrosion, wear & tear and reduce friction in engines. With a majority of engine run on diesel, there is a growing demand for motor oils with shear resistance and specified viscosity index. This trend is expected to complement industry growth over the forecast period.

Lubricants are manufactured through base oil and additives which are derived from petroleum sources such as crude oil, shale oil, and CBM. These are further refined to produce mineral oils such as paraffinic oils, naphthenic oils, and aromatic oils. These oils in combination with additives give lubricants that find applications in automotive.

With depleting crude oil reserves, the market has witnessed a crunch in raw material supply. Major oil companies have started to focus on developing new refining techniques, and sources to overcome this obstacle. This trend has led to an establishment of patented refining technologies that are limited to established companies and their alliances. Shell, ExxonMobil, and Kendall have developed PurePlus, Mobil 1, and Liquid Titanium technologies for producing lubricating oils, principally motor oils.

The automotive lubricants market is growing due to the increasing demand for engine oils, brake fluids, and transmission fluids among both consumer and commercial automobiles. Increasing sales of motorcycles are also expected to further strengthen this growth over the forecast period. The shift in trend towards green derivatives is also expected to drive the market over the forecast period. The strong presence of regulatory associations, such as EPA and REACH, is also projected to help the overall bio-based lubricants market.

Rising per capita income and increasing need for individualized transportation options has driven the sale of cars in several countries. OEMs are thus ramping up their production capabilities in order to meet growing regional and export demand. It has driven the demand for at the OEM level itself.

On the basis of product, the industry has been segmented into the engine oil, gear oil, transmission fluids, brake fluids, coolants, and greases. Engine oil was the leading segment and accounted for over 54.5% of the overall revenue in 2016. Engine oil is widely used in passenger cars, diesel trucks, and light-duty trucks. It helps in maintaining viscosity, ensure dependability, and reduce engine wear. It also contributes to keeping the engine cool, corrosion-free, and clean. 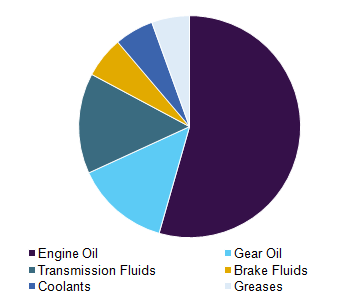 It is very crucial to use correct engine oil as per the vehicle’s requirement since using the wrong oil can damage the engine, burn more fuel as well as increase carbon emissions as well. Major industry players are involved in extensive R&D to develop innovative engine oils with higher-performing additives.

China’s automotive industry has witnessed a high growth rate in 2016, with total vehicle sales booming over 13% in comparison to 2015. Tax incentives on small-engine cars, which reduced to 10% to 5% played a crucial role in industry growth. Rapidly expanding sales of electric and plug-in hybrid vehicles across the region is another factor contributing significantly to automobile industry growth. These trends are further expected to propel engine oil demand in upcoming years.

Gear oil, on the other hand, is a high viscosity lubricant widely used to protect gear and ensure a smooth transfer of lubrication through the gear train. Major players such as ABRO Industries, Inc. have developed gear oils with high-quality base stocks to provide improved oxidation stability and longer service life. The oil exhibit various exceptional properties such as anti-foaming, corrosion as well as wear resistance of metals in vehicles. Additionally, gear oils are also utilized to provide superior performance by maximizing oxidation resistance, offering extended drain intervals, preventing gear scuffing and scoring as well as easing the start-up even in arctic conditions.

Brake fluids are the fastest-growing product during the forecast period. It is a hydraulic fluid, widely utilized in hydraulic brake and clutch applications in automobiles. The primary function of a brake fluid helps in transmitting the driver’s foot pressure on the brake pedal to lock friction material against the discs by providing an incompressible medium.

DOT3, DOT4, and DOT5 are the main categories of brake fluids available in the U.S. market. Additionally, brake fluids are expected to meet certain characteristics for the braking system to work properly, including high boiling point, constant viscosity, corrosion resistance and low level of compressibility

The Asia Pacific was the leading region and accounted for over 43.9% of the total market revenue in 2016. Asia Pacific automotive industry is anticipated to witness a high growth rate over the forecast period owing to rapid economic development, mega construction projects, and an introduction of various favorable policies by the Government such as 100% FDI and “Smart Cities.”

North America accounted for over 19% of the total market volume in 2016. The North America market is mainly driven by rapid industrialization taking place in Mexico. Mexico has emerged a major automobile manufacturing hub since the last decade. Major U.S. based auto manufacturers have shifted their production bases to Mexico on account of relatively low manufacturing costs in the country. Developed markets of North America and Europe are also characterized by the growing demand for bio-lubricants.

The automotive lubricants industry is highly competitive and relatively concentrated, with the top four companies accounting for the maximum share of the production in 2015. Some of the key market participants include ExxonMobil, Royal Dutch Shell, Total SA, and British Petroleum.

How big is the automotive lubricants market?

What is the automotive lubricants market growth?

Which segment accounted for the largest automotive lubricants market share?

b. Engine oil dominated the automotive lubricant market with a share of 56.76% in 2019. This is attributable to the increasing demand from passenger cars, heavy-duty trucks, and light-duty trucks. They help to maintain the viscosity, ensure dependability and reduce engine wear.

Who are the key players in automotive lubricants market?

What are the factors driving the automotive lubricants market?

b. Key factors that are driving the market growth include increasing demand for lightweight vehicles and passenger cars and a shift in consumer preference toward sustainable lubricants.