Automotive metal stamping market size was USD 70.42 billion in 2015. Automotive metal stamping is a process of converting sheet metal into shapes & sizes based on the end-user requirements. The industry is highly influenced by metal consumption patterns in all applications segments. Automotive industry has traditionally been reliant on metals such as steel, cast iron, aluminum and titanium for manufacturing & assembling various machinery, equipment and tools.

Factors expected to drive the industry comprise of machining capabilities of manufacturers and lean manufacturing methods to reduce wastage during processes. These factors are also crucial to improve operational efficiency and thereby reduce operating costs. As a result, automotive metal stamping companies are investing significantly in research and development projects. Technological innovations including improved stamping processes have seen commercial usage over the recent past. Furthermore, regulatory policies are aimed at improving working conditions & safety standards, waste disposal, and materials usage which is expected to shape the growth & sustainability strategies of companies. 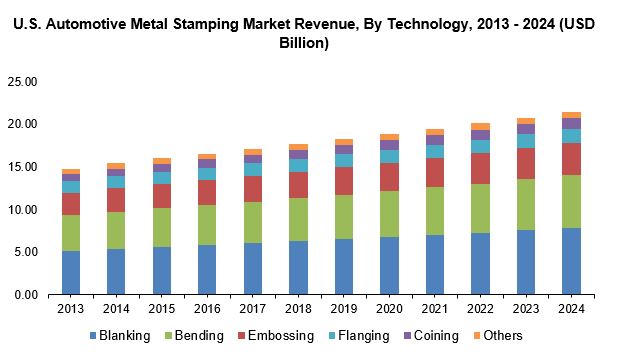 Metals and alloys are widely consumed in automotive manufacturing. Major OEMs have established manufacturing contracts with automotive metal stamping companies and are a crucial source for expanding the business for the latter. As a result, automotive production trends and policy framework intended towards the composition in automobiles has a huge influence on metal stamping industry.

Increasing production in major automotive markets such as the U.S., Germany, France, UK, Italy, and Japan is expected to support industry growth over the forecast period. In addition, with economic growth and increasing consumer disposable income in emerging markets such as China, India, Brazil and Mexico, automotive industry is expected to grow over the forecast period.

Large automotive corporations such as Ford, Volkswagen, Mercedes (Daimler AG), and Toyota have established manufacturing facilities in these high growth potential regions. This has led to technology transfer and increased scope of operations for domestic metalworking industry. This trend is crucial in determining regional competition in the metal stamping market.

Major processes in automotive metal stamping industry include blanking, embossing, bending, coining and flanging. Among these processes blanking and bending dominated the global market accounting for 37.1% and 27.6% respectively in 2015 followed by embossing. Other processes include curling, hemming, ironing, drawing and stretching, which are expected to witness decline in their market share over the projected period.

Developing Asia Pacific and Latin American market are presumed to witness significant growth owing to factors such as rising disposable income and government initiatives to promote industrialization such as Make in India, etc. Emerging economies such as China, India and Brazil are expected to lead their respective regional markets over the next seven years. 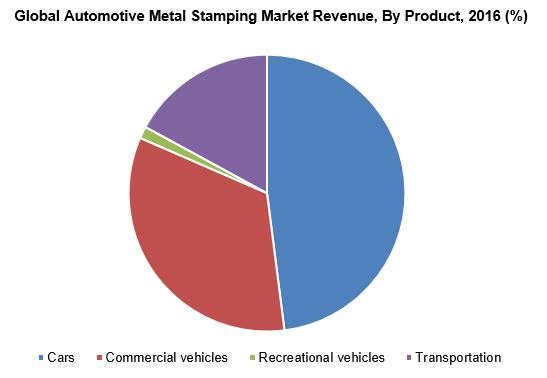 Europe accounted for 30.2% of the total market share in 2015. The presence of automotive industry leaders including Volkswagen and BMW and major automotive manufacturing facilities such as in Germany, UK, Italy and others is expected to bolster the market growth over the projected period. North American market is expected to grow substantially on account of the application of stamped metal parts in cars and recreational vehicles.

The automotive metal stamping market is highly competitive owing to the presence of a large number of established manufacturers and suppliers and new entrants in the market. Major players such as Alcoa Inc., Martinrea International, Shiloh Industries, Inc. are actively involved in the automotive metal stamping market, with numerous strategic alliances and global presence.