The global automotive wrap films market size was valued at USD 3.5 billion in 2019 and is anticipated to progress at a CAGR of 22.5% from 2020 to 2027. The growing sign and graphics industry, low cost, and increasing demand for mobile advertising are expected to fuel market growth. 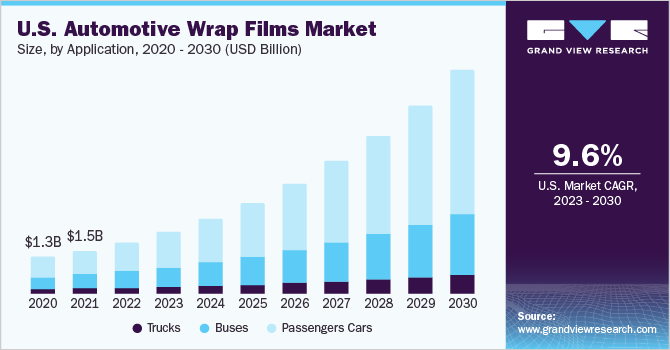 In addition, modernization of consumer lifestyle, combined with rising demand for personalization of cars, is anticipated to have a positive impact on demand for automotive wrap films. This can be attributed to factors such as improving the standard of living and rising disposable income, especially in emerging economies such as China and India. Growing demand for customization on light-duty vehicles like cars and two-wheelers is expected to drive the automotive wrap films market.

The growing acceptance of solid colored automotive wrap films such as matte black, blue, matte orange, pink, and green is anticipated to increase demand among consumers in the U.S. Furthermore, textured finish such as carbon fiber, wood grain, leather, and brushed metal is being rapidly adopted in Europe and North America.

Automotive wrap films are being increasingly used in various applications including heavy-duty, light-duty, and medium-duty vehicles. These films are a cost-effective and cost-efficient method for customization of any vehicle as they protect the original paint of the car and retain its resale value. The growing need for long-term protection of vehicle paint is therefore expected to fuel the demand for automotive wrap films over the forecast period.

However, the technical complexity associated with the installation of these films is expected to restrain the market growth during the forecast period. The installation of wrap films requires specific environmental conditions in order to make sure that the wrap is placed perfectly. If a wrap is installed outdoors, pieces of dirt could stick to the vehicle surface and form a layer between the vehicle surface and the film. Thus, it is necessary to install the wrap film in a clean and dirt-free indoor facility. Temperature is also a vital factor in the proper installation of automotive wraps. If the temperature is too high, the wrap might overstretch, while at low temperatures the film shrinks. 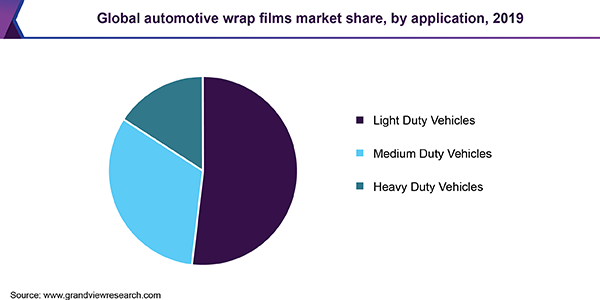 North America held the largest share in the global market for automotive wrap films in 2019. Early modernization of North America, coupled with a high adoption rate of new technologies in the region, has led to high demand for personalization of cars, ultimately leading to the growth of the market. Furthermore, rising safety awareness and growing emphasis by regulatory bodies to implement fire protection systems in buildings in the region is anticipated to augment market growth over the forecast period.

The market is fragmented in nature with the presence of various key players such as 3M Company, Arlon Graphics LLC, Hexis UK, Orafol Group, and Ritrama S.p.A. Key companies in the market are adopting strategies such as joint ventures, mergers and acquisitions, and new product development in order to increase their product offerings and gain a larger share in the market.

A handful of significant automotive vinyl film manufacturers dominate the market. A large number of vehicle wrap suppliers and installers are present in North America and Europe. Vinyl film manufacturers supply wraps in other regions through an extensive distribution network worldwide. In recent years, companies have been strategizing to widen their distribution channel and increase sales.

This report forecasts revenue growth at global, regional, and country levels and provides an analysis of the latest industry trends in each of the sub-segments from 2016 to 2027. For the purpose of this study, Grand View Research has segmented the global automotive wrap films market report on the basis of application and region: