The global beef market size was valued at USD 467.7 billion in 2021 and is expected to progress at a compound annual growth rate (CAGR) of 4.8% from 2022 to 2030. With increasing globalization, the food preferences of consumers around the world have witnessed some significant changes. Consumers are increasing their protein intake, resulting in the rising demand for meat. Meat and its products are packed with a host of essential ingredients and nutrients and save a lot of time and effort in cooking. Therefore, manufacturers are primarily focusing on the quality of the meat and its products. 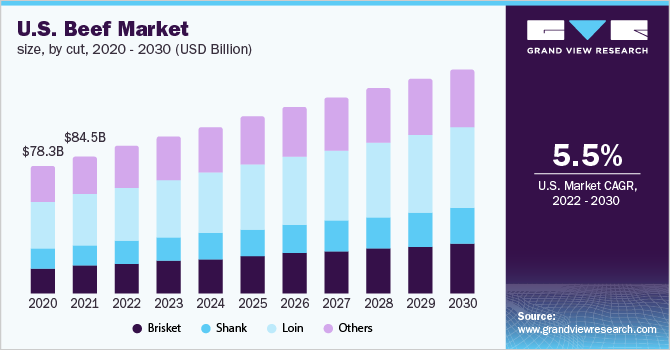 The COVID-19 pandemic has caused disruptions in the market. The limited availability of some meat products in retail stores resulted in a price rise. The COVID-19 outbreak has impacted numerous meat production facilities across the globe. These outbreaks affected a large number of plants, which led to the disruption of the supply chain, closure of some factories, and posed a substantial threat to the meat supply across regions. In May 2020, Cargill, Inc.’s beef processing plant in High River, Alberta was the largest factory outbreak in Canada. More than 1,000 cases were linked to the plant, and it was considered the single largest virus cause in North America.

Rising health consciousness among the masses, along with the increasing demand for animal-sourced protein, is one of the key factors driving the market. With changing dietary habits, consumer preferences are rapidly shifting toward food products with low fat and calorie content and high protein value. Additionally, the increasing utilization of beef in the food industry is favoring market growth. Beef-based burgers, hotdogs, sausages, fillets and steaks, and stews are widely served across cafes and restaurants to provide consumers with authentic and multi-cuisine dishes.

Some of the key factors propelling the demand for meat are the constantly rising income of middle-class consumers in the developing countries of Latin America and the Asia Pacific, as well as the significant demand for convenience foods among the working population and the younger generations who are keen on cooking at home. Over the past few years, the busy daily schedules of consumers have widened the market scope for ready-to-eat meat products across the globe.

The loin segment dominated the market and accounted for the largest revenue share of 36.5% in 2021. The rising health consciousness among the masses, along with the increasing demand for animal-sourced protein, is one of the key factors driving the market. Loin cut benefits greatly from dry aging. Also, these are the tenderest, juiciest, and the most flavorful.

The brisket segment is expected to witness a significant CAGR during the forecast period. Brisket is the meat surrounding the breastbone; it is the lower breast or pectoral muscle of the animal and is one of the primal cuts. Since this area is so well-exercised, it makes for a rather tough piece of meat that is full of connective tissues and therefore, is best suited for a low and slow cooking process. It is coarse-grained and thick meat, which requires a lot of time and low temperature to tenderize and break down. Brisket is one of the most flavorful cuts of meat. Brisket cuts are popular due to their low cost and are mostly used in BBQ.

The halal segment is projected to witness a CAGR of 4.5% during the forecast period. Demand for halal products is mostly driven by the growing Islamic population around the world. Halal beef is the one that is free from any component that Muslims are prohibited from consuming and these are processed or produced in accordance with Islamic law. It is commonly known as the Islamic slaughter method wherein the cut must sever at least three of the trachea, esophagus, and the two blood vessels on either side of the throat. Halal beef is one of the most preferred forms of meat for the followers of Islam since the religion prohibits the consumption of pork. 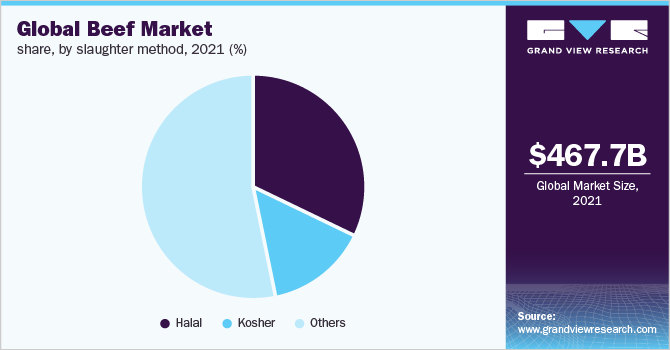 Kosher is a form of beef primarily consumed by the Jewish population around the world. Kosher beef is consumed in accordance with the Jewish dietary laws, which dictate what Jewish people can and cannot eat based on their religion and how food items should be prepared. The word kosher is an umbrella term for foods that fit into these dietary laws according to the Jewish traditions. Cattle that have died of natural causes, those that are killed by other animals or have diseases or flaws cannot be used for kosher beef.

The Asia Pacific dominated the market and accounted for a revenue share of 47.8% in 2021. The key beef markets in the Asia Pacific are China, India, Pakistan, Japan, and Australia. China is one of the world’s largest markets for beef as the country is witnessing a significant rise in consumption, driven by increasing disposable incomes. Ongoing shortages and pandemic-related labor shortages specifically in the country like China are likely to support the increasing import of frozen beef, with Australia remaining the biggest supplier.

In North America, the market is expected to register a significant CAGR of 5.4% over the forecasting period, the presence of effective and sound infrastructure like sophisticated processing facilities and transportation networks, as well as intellectual expertise on issues like genetics, meat quality, and legal property rights, is supporting the market in the region. North America is the world’s largest producer of beef for domestic and export markets. Despite the fact that grasslands are North America’s most threatened terrestrial ecosystem, largely due to climatic and market pressures, most beef cattle are grass-fed at some point during their lifecycle.

Some of the prominent players in the beef market include:

This report forecasts revenue growth at global, regional, and country levels and provides an analysis of the latest industry trends in each of the sub-segments from 2017 to 2030. For the purpose of this study, Grand View Research has segmented the global beef market report based on cut, slaughter method, and region:

What is the beef market growth?

Which segment accounted for the largest beef market share?

b. The Asia Pacific was the largest market for beef and accounted for 47.8% of the global demand in 2021. The key beef markets in the Asia Pacific are China, India, Pakistan, Japan, and Australia. China is one of the world’s largest markets for beef as the country is witnessing a significant rise in consumption, driven by increasing disposable incomes. Ongoing shortages and pandemic-related labor shortages specifically in the country like China is likely to support the increasing import of frozen beef, with Australia remaining the biggest supplier

Who are the key players in beef market?

What are the factors driving the beef market?

b. Key factors that are driving the market growth include rise in population, increasing consumer disposable income, and emergence of beef as a key source of protein.

How big is the beef market?