The global beer glassware market size was valued at USD 375.5 million in 2018. Rising consumption of beer among youth population, particularly among females coupled with rise of after-work drinking culture is driving the market growth. Furthermore, rise in the number of pubs and bars in the developing countries, such as India and China, is projected to drive the demand for glassware in near future.

Beer is one of the most consumed alcoholic beverages across the globe, with high product demand from bars, pubs, restaurants, hotels, clubs wine shops, supermarkets and online retails. Furthermore, introduction of new and innovative flavors, such as apple, cheese, blueberry, chocolate, and lemons among others in beer variants is expected to boost the product consumption and thus, in turn, promote the demand for drinkware. 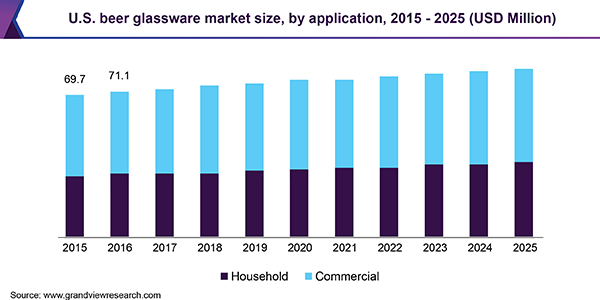 Rising popularity of craft beer has been fueling the demand for beer glassware across the world. Furthermore, rising adoption of western culture has been encouraging consumers to prefer beer to rum, whiskey, and other alcoholic beverages. Rising number of house parties and drinking games among youth population is expected to promote the consumption of alcoholic beverages, leading to increased demand for glassware.

Different styles of glassware reflect various traditions, folk art, serving measures, and stacking. The drinkware manufacturers incorporate these styles in their product variants in commercial breweries. Different styles of glasses are used to enhance the appearance, beer head, and aroma. Consumers select a glass that will complement their choice of drink.

In 2018, commercial application segment led the global beer glassware market with a revenue share of over 60%. Increased penetration of clubs, bars, and pubs has fueled the demand from the commercial sector. In addition, the bulk requirements of the product are expected to help the segment maintain its dominance in near future.

On the other hand, the household application segment has also been witnessing a rise in adoption of induction hobs. This segment is expected to expand at a CAGR of 4% from 2019 to 2025. Over the past few years, consumer preference is shifting from drinking at pubs and bars to home settings. For instance, in 2015, the British Beer and Pub Association (BBPA) found that 51% of total beer sold was traded through off-trade in U.K. Heavy taxes on alcohol is increasing the price of beer in pubs and bars, which encourages consumers to buy drinks from retailers and drink at home. This shifting trend is expected to fuel the demand for glass drinkware in the household sector in the upcoming years.

In 2018, pints held the largest market share of more than 30% in terms of revenue. They are the most common and traditional glasses used for beer consumption. Standard pints are available in 16 ounce and 20 ounce sizes. The 20-ounce pints are highly preferred as they accommodate more product and beer with large crowning heads. These glasses are well suited for serving classic ales such as pale ale, India pale ale, brown ale or stout, English dark mild ale, Euro dark lager, Irish red ale, American blonde ale, and American black ale. 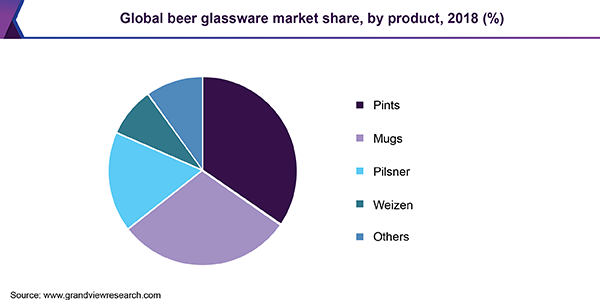 Weizen is expected to witness the fastest CAGR of 5.1% from 2019 to 2025. Weizen glasses are suitable for drinking wheat ale, Dunkelweizen, Hefeweizen, Kristalweizen, and Weizenbock. These products have thin walls and better length that display the color of wheat ale with their attractive curvature. Generally, they hold one-fifth liter of alcohol. Similarly, pilsner glasses are also expected remain popular in near future. These tall and slim glasses display the clarity, bubbles, and sparkle of pilsners and other pale beers. Usually, pilsners hold less ale as compared to pints.

In 2018, Europe held the largest market share of more than 30% in terms of revenue. Increasing number of microbreweries in European countries, including Germany, the U.K., Poland, Spain, Netherlands, Belgium, and France, has been boosting the regional market. The number of active breweries has increased by 1000 from 2017 to 2018. Among the 9500 breweries in Europe, around three fourth were microbreweries and Small and Medium Enterprises (SMEs). In addition, the growing culture of home brewing and house parties has fueled the product demand in the region.

On the other hand, Asia Pacific is expected to expand at the fastest CAGR of 6.2% from 2019 to 2025. The budding drinking culture among the young population from countries such as Thailand, Vietnam, Philippines, and India, among others is anticipated to be a key growth driver. Furthermore, increasing number of pubs, bars, clubs, and lounges in Asia Pacific is expected to fuel the regional demand for beer glassware over the projected period.

This report forecasts revenue growth at global, regional, and country levels, and provides an analysis of the latest industry trends in each of the sub-segments from 2015 to 2025. For the purpose of this study, Grand View Research has segmented the global beer glassware market report based on product, application, distribution channel, and region: