The global bioethanol yeast market size was valued at USD 11.42 billion in 2020 and is expected to grow at a compound annual growth rate (CAGR) of 14.04% from 2021 to 2028. The product demand is anticipated to be driven by the increasing consumption of alcoholic beverages, bakery products, etc. There has been a significant decline in demand for petrochemical-based raw materials owing to the shift towards bio-based raw materials. The production and consumption of bioethanol are highly influenced by its demand in the end-use industries. Thus, any fluctuations in the demand from end-use industries are anticipated to directly impact the demand and prices of bioethanol. 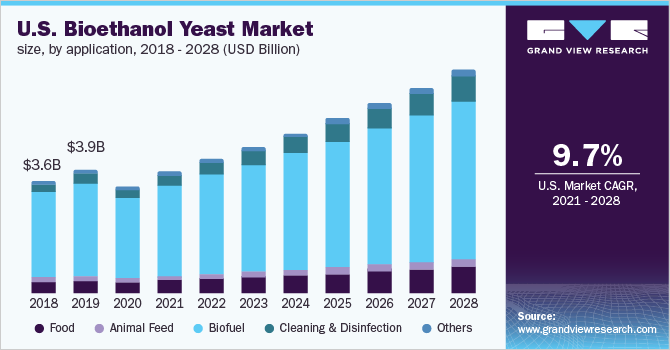 Furthermore, disruptions in the supply chain, such as difficulty in raw material sourcing due to the restrictions on trade and inconsistency in logistics services, are expected to have an adverse impact on the food & beverage market, thereby affecting the overall product demand. The fluctuating prices of ethanol and feedstock are one of the key factors driving the shifting trend toward sustainable chemicals. The consumption of bioethanol yeast is expected to rise significantly over the forecast years as a consequence of the increasing demand for food and animal products. Moreover, the rising demand for food & beverage products, due to the increased consumer disposable income levels, constant product innovations, and high market penetration across various countries, will support market growth.

Biofuel production is one of the largest application segments of bioethanol yeast. However, due to the pandemic, the demand from the cleaning industry is observed to be rising significantly worldwide. Increased consciousness among consumers regarding cleanliness and sanitization has led to the high demand for bioethanol yeast since the first decade of 2020. However, the market is projected to reflect similar trends over the coming years on account of increased consumer awareness. Other key application segments including food and cleaning & disinfection are expected to witness significant growth in the years to come.Increasing concerns regarding the harmful effects of petrochemicals on the environment have propelled the use of bio-based and sustainable chemicals.

The industry has shifted its focus toward the development of biodegradable products and base chemicals using bio-based raw materials to reduce carbon footprint and the dependency on petrochemicals. Strict regulations regarding the use of petrochemicals on the account of growing demand for renewable sourcesare expected to have a positive impact on the overall market during the forecast period. The global market is highly competitive with the presence of numerous small-scale regional as well as global players.

The biofuels application segment accounted for the largest revenue share of more than 68% in 2020 and is anticipated to remain dominant over the forecast period. This high share is attributed to the increased consumption of biofuels as a substitute for fossil fuels. Furthermore, it is used as an alternative to petrol for road transport vehicles as it reduces the amount of carbon monoxide produced, thus improving air quality. This, in turn, is anticipated to increase its demand over the forecast period.

The product demand is expected to increase in the market owing to the surge in demand for organic bakery products due to the rising awareness regarding the consumption of healthy and safe foods. The food and beverage industry is considered vital for economic growth. The rising population and changing eating patterns are expected to be the key factors driving the segment. Furthermore, the growing demand for disinfectants and sanitizers worldwide is expected to fuel the market growth. During the COVID-19 pandemic, the purchase rate of disinfectants rose drastically owing to the fear of the virus among people.

Several companies, such as Verbio and Clariant, irrespective of their core businesses started investing and manufacturing disinfectants and related products to gain profits. Such factors led to a massive increase in product demand during the pandemic. In animal feed applications, yeast, such as Saccharomyces cerevisiae, is used as a feed additive, which helps promote digestion, growth of fiber-digesting bacteria, rumen stability, and reduce fluctuations in pH while optimizing animal performance and improving the retention of support minerals.

In terms of volume, the baker’s yeast type segment dominated the market with a share of over 67% in 2020. Baker’s yeast consists of one or more strains of Saccharomyces cerevisiae, a fungus used as a leavening in the bakery. Saccharomyces cerevisiae is also known as one of the top-fermenting yeasts, owing to its property of rising to the top of the fermentation vessel, as a result, it is highly used in the brewing of beer.Baker’s yeast is widely used in the production process of beer, coffee, and wine because of its high acid tolerance, low susceptibility to infection than bacteria, and better fermentation capacity. 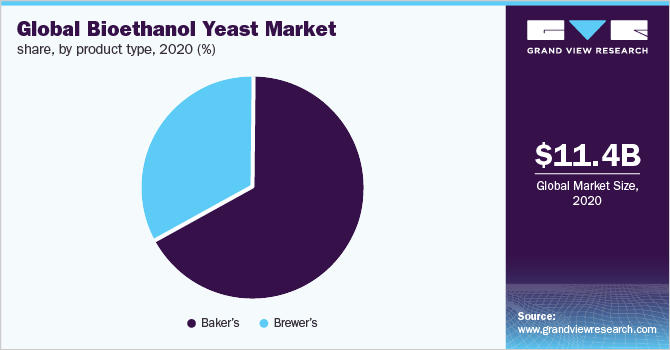 It is reacted with biomass substances, such as agricultural waste, to produce bioethanol. The optimum pH value required for the reaction is from 4–5 for the highest yield. The demand for baker’s yeast for producing bioethanol is expected to increase in the market because it is one of the most sustainable, affordable, and eco-friendly methods. However, the ongoing R&D for the development of a new method of producing bioethanol may result in the advent of new strains with higher yields and, thus, may restrain the demand for baker’s yeast.

As per the global status report on alcohol and health 2018, worldwide, 44.8% of the total alcohol consumption was in spirit form followed by 34.3% in beer and 11.7% in wine. However, increasing awareness about a healthy lifestyle is expected to reduce the consumption of alcohol in the coming years.

The market in North America accounted for the largest revenue share of more than 47% in 2020 and will expand further at a steady CAGR from 2021 to 2028.Stringent government regulations regarding the use of antibiotics owing to their harmful effects on animals, combined with increasing awareness regarding the consumption of safe and healthy food, are expected to fuel the demand for bioethanol yeast over the forecasted years.

According to a survey conducted in 2019 by the Organization for Economic Co-operation and Development (OECD), North America has been the second-largest consumer of dairy products, such as cheese, for the past several years.The demand for disinfectants and cleaners is likely to rise with the growing concerns about the spread of diseases and infections, specifically during the Coronavirus pandemic as it continues to spread across the region.

Extended support from the government for maintaining the environment clean has also propelled product consumption across end-use segments in the region. The Europe region has also witnessed a surge in demand for cleaners and disinfection products amid the pandemic. International market players are expanding their production facilities in the region to meet the rising domestic demand for bioethanol yeast.

R&D and technological advancement, in terms of production technologies, have further augmented the market growth in the region. Germany was the top producer of beer with a production of approximately 8 billion liters of beer, followed by Poland, Spain, the Netherlands, Belgium, and France. Thus, the growing demand for end-use products is expected to drive the demand for bioethanol yeast over the forecast period.

The high demand for these products offers an opportunity for manufacturing companies in analyzing the customers’ needs and value proposition of competition in the market. Innovative feedstock and process technologies play a vital role in the manufacturing of bioethanol yeast. Manufacturers are engaged in developing and innovating new process technologies to reduce their production costs, time, and also increasing their operational efficiency. Some of the prominent players in the global bioethanol yeast market include:

This report forecasts revenue growth at global, regional, and country levels and provides an analysis on the latest industry trends in each of the sub-segments from 2017 to 2028. For the purpose of this study, Grand View Research has segmented the global bioethanol yeast market report on the basis of product type, application, and region:

How big is the bioethanol yeast market?

What is the bioethanol yeast market growth?

Which segment accounted for the largest bioethanol yeast market share?

b. North America dominated the bioethanol yeast market with a share of 47.4% in 2020. This is attributable to rising demand for end-use industries, growing consumer interest in healthy, gourmet, and organic products.

Who are the key players in bioethanol yeast market?

What are the factors driving the bioethanol yeast market?

b. The increase in the consumption of bakery products and alcoholic beverages are the major driving factors for the market growth of bioethanol yeast.