Agricultural products, such as fruits, vegetables, cereals, and cotton, are major application areas for nitrogenous fertilizers. Production levels of crops are largely affected by climatic variations, which, in turn, change the demand and supply of crops as per the season. Wheat supplies increased to 4.7 million tons globally from 2017 to 2018. During the same period, rice supplies increased to 632.8 million tons, primarily owing to high production in India. 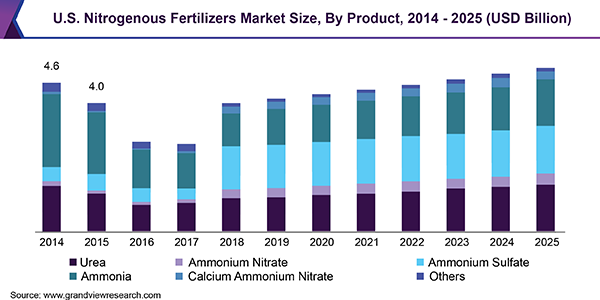 Emerging economies around the world are now realizing the importance of using nitrogenous fertilizers in agricultural production. The farmers of developing countries, such as China, India, Uganda, and Rwanda, are gaining knowledge regarding the accurate use of chemicals. Moreover, local companies are engaged in providing sales services regarding the technologies and crop nutrient requirements. These companies also educate the users regarding the potential harm caused by excess utilization of fertilizers and their correct storage and disposal methods.

Various institutions across the globe are involved in spreading awareness regarding the use of products that are beneficial for agricultural yield. Some of them include the International Fertilizer Development Center (IFDC) and Global Alliance for Climate-Smart Agriculture (GACSA). Such initiatives have led to a rise in the global consumption of nitrogenous fertilizers.

Urea and ammonia together account for over 50% of the total nitrogenous fertilizer market share in terms of both volume and revenue. Urea is also leading the product type segment in the market in terms of growth owing to its higher volume of consumption and affordable cost compared to the other products. It is majorly preferred for acidic soil for crops such as corn, strawberries, and blueberries.

The reaction of ammonia with carbon dioxide leads to the formation of urea. Hence, the price of the raw materials is among the major factors impacting the price trends of urea fertilizer. Along with this, the government subsidies in developing countries and last-minute buying trends in the U.S. and countries in Europe also affect the prices of the products in the global market.

Ammonia is the most commonly and traditionally used nitrogenous fertilizer. It is considered to be the richest source of nitrogen with around 82% of the element and hence is anticipated to grow at a CAGR of 4.4% from 2019 to 2025 in terms of revenue. It helps maintain the pH value in soil and makes the soil alkaline. Such type of soil is suitable for cultivation of carrots, cauliflower, potatoes, peanuts, and few other crops, which require a pH value greater than seven.

Cereals and grains is the leading application segment in the market owing to the growing demand from food and animal feed industries. Shrinking farmland and growing demand for food crops such as wheat, maize, rice, barley, and oats, are boosting the demand for agricultural chemicals. Among the cereals consumed globally, wheat is the largest consumer of nitrogen-based soil nourishers followed by barley. Nitrogen is applied to cereals and grains in the form of soil additives or sprinklers.

Oilseed is one of the highest revenue generating crops owing to its demand in the production of edible oil. Mustard and soybean are the most highly consumed edible oilseeds. Soil required for the growth of these crops needs to have a balance of nitrogen, sulfur, and calcium. These factors are anticipated to increase the usage of nitrogenous fertilizers for the production of oilseeds. 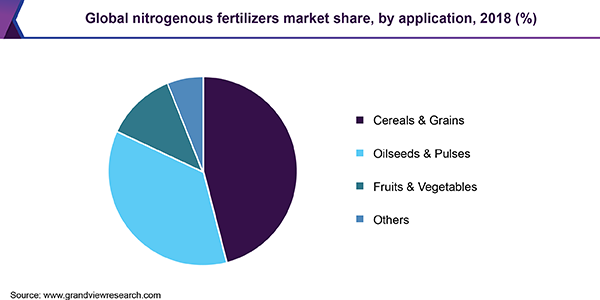 Growing health awareness globally has driven the demand for pulses owing to their dietary protein content. Pulses have the ability to convert and utilize the atmospheric nitrogen and hence consume less volume of fertilizers compared to the other crops. Both these crops have a demand-supply gap, as their annual yield does not meet the global requirement. These factors are anticipated to increase the usage of nitrogen fertilizers for the production of oilseeds & pulses, thus leading to an annual revenue growth rate of 5.1% from 2019 to 2025 in the market.

In terms of volume, Asia Pacific is the largest as well as the fastest growing market for nitrogenous fertilizers with a market share of 57.6% in 2018. The advancements in farming methods along with the presence of large agricultural lands influence the market dynamics. The region is home to various emerging economies including China, India, Indonesia, Philippines, Malaysia, and Thailand.

Asian countries have a large area available for cultivation, considerably high rural population, and favorable climatic conditions. The region is anticipated to witness the highest growth for nitrogenous fertilizers in terms of revenue and volume. Prominent global manufacturers of nitrogenous fertilizers have set up their production units in Asian countries on account of rising demand and increasing focus on food security.

The primary factor driving the demand for nitrogenous fertilizers in Europe is the huge variety of crops grown across different countries. As of 2017, in Europe, 39% of the total land area was occupied by agriculture and grasslands. Frequent climate changes and pollution of soil and water caused by fertilizers are the major challenges for European agriculture sector. Owing to these concerns, manufacturers have developed energy-efficient techniques to produce ammonia. Ammonia manufacturers in Western Europe are known to use most energy-efficient techniques compared to those in the other parts of the world.

The market participants are majorly focusing on the development of new nitrogenous fertilizers with sustainable qualities. The competitive factors that have a deep impact on the market growth include regulatory approvals, product portfolio, pricing, and manufacturing technology. Local market players mostly focus on their specific strengths and retain their customers by providing custom services to farmers.

Companies in the Asia Pacific market also focus on increasing their manufacturing capacity, as the demand for agrochemicals is growing in several countries such as China and India. Some of the key market participants are Nutrien, Koch Industries, Yara International, OCI Nitrogen, and CF Industries Holdings, Inc. The other manufacturers of nitrogenous fertilizers in the market are ICL Fertilizers, EuroChem Group AG, Sinofert Holdings Limited, and Coromandel International Ltd.

This report forecasts revenue growth at global, regional & country levels and provides an analysis of the industry trends in each of the sub-segments from 2014 to 2025. For the purpose of this study, Grand View Research has segmented the global nitrogenous fertilizer market report on the basis of product, application, and region: