The global biogas market size was valued at USD 57.53 billion in 2020 and is projected to grow at a compound annual growth rate (CAGR) of 4.4% from 2021 to 2028. The global market is expected to witness high growth on account of the rising product demand from various applications, such as electricity, heat, vehicle fuel, upgraded biogas, and cooking gas. Shifting focus towards the use of renewable energy, particularly in the electric power sector, has significantly augmented the demand for biogas in electricity applications. In addition, the growing need to reduce dependency on fossil fuels is forming lucrative prospects for biogas in applications, such as vehicle fuel. 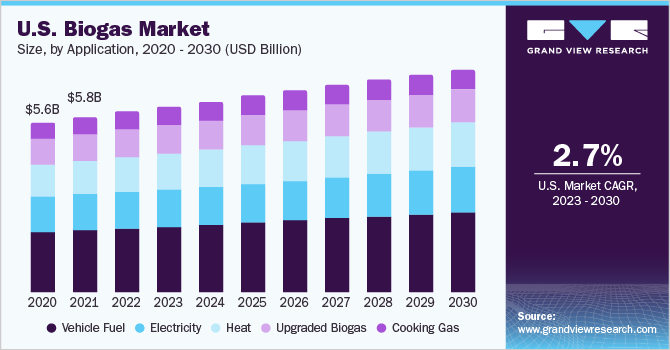 The U.S. is one of the largest markets for biogas in North America and is projected to grow at a significant growth rate over the forecast period. The United States government has introduced several regulations to lessen its dependency on conventional fuels and meet the goal of zero carbon emissions. Significant factors that are influencing the market growth are favorable regulatory & political support, environmental support, customer support, geopolitical support, and agricultural &economic support.

The demand for biogas in North America is primarily driven by the U.S. The growing demand for the product in applications, such as cooking gas, electricity, vehicle fuel, and heat, is expected to have a positive impact on the industry growth over the forecast period. Major factors boosting the growth of the regional market include high demand for green fuels, stringent environmental regulations, and increased investments in the development of refineries.

The abrupt onset of the COVID-19 pandemic caused industrial lockdown that brought all manufacturing activity to a grinding halt in most industries around the world. Hence, it has also impacted the product demand in heat generation applications. Sluggish industrial activities have reduced the demand for heat consumption, thereby negatively affecting the overall market growth.

The municipal source segment led the global market and accounted for more than 41% of the overall revenue share in 2020. The growing usage of municipal Solid Waste (MSW) in the production of biogas to reduce landfills and greenhouse emissions is expected to support the growth of this segment over the forecast period.

The electricity application segment led the global market in 2020 and accounted for more than 30% of the overall revenue share. The growing focus on the usage of renewable energy, particularly in the electric power sector, has significantly increased the demand for biogas for electricity generation. In the U.S., in 2019, approximately 220 million kWh of electricity was generated using biogas (from 24 livestock and dairy operations) and from industrial and sewage wastewater treatment facilities approx. 1 billion kWh of electricity was produced. Biogas in the country qualifies as renewable energy fuel to generate electricity as per the state Renewable Electricity Standards (RES). 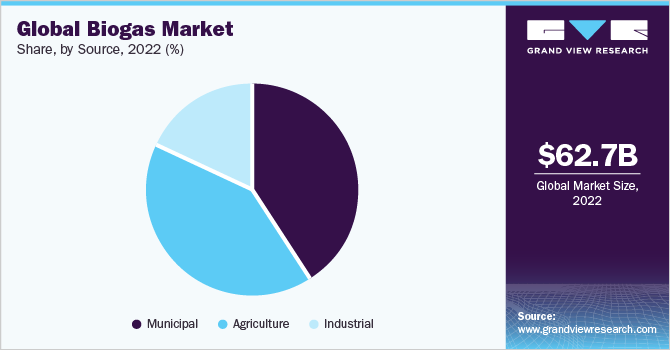 The upgraded biogas application segment is expected to grow significantly over the forecast period owing to the rising demand for biofuel in various end-use industries, including automotive. Upgraded biogas is produced by converting biogas into biomethane by removing hydrogen sulfide, carbon dioxide, water, and contaminants from it.

The demand for biogas in North America is primarily driven by the U.S. The rising demand for the product in applications, such as cooking gas, electricity, vehicle fuel, and heat, is expected to have a positive impact on the regional market growth over the forecast period. The market in Europe is estimated to have considerable growth over the forecast years on account of technological developments and increasing investments in the region’s refinery industry.

Companies across the Europe region are investing huge capital in the research and development of biogas production from existing sources and planning to increase the share of feedstock over the next few years. These factors will fuel the market growth across the region. In Italy, the market is driven by the efforts of the government to move toward decarbonization. For instance, in 2017, the government of Italy launched the Italian National Energy Strategy (SEN), a 10-year plan, which has laid the foundation for the adoption of various advanced and innovative energy models for the country.

The global market is highly competitive due to the presence of major companies across the regions. Air Liquide, PlanET Biogas, Wartsila, EnviTech Biogas AG are full-scale manufacturers and leaders in terms of investments in R&D.Spanish companies are taking active steps to drive the adoption of biogas in the country. For instance, Repsol, a Spanish fuel company, in June 2020, announced to develop an industrial-scale biogas project. Some of the key companies operating in the global biogas market include:

This report forecasts revenue growth at global, regional, and country levels and provides an analysis of the latest industry trends in each of the sub-segments from 2017 to 2028. For the purpose of this report, Grand View Research has segmented the global biogas market report on the basis source, application, and region:

How big is the biogas market?

What is the biogas market growth?

Which segment accounted for the largest biogas market share?

b. Electricity accounted for the largest application segment in 2020 and is expected to grow at a CAGR of 3.8% over the forecast period.

Who are the key players in the biogas market?

What are the factors driving the biogas market?

b. The global biogas market is expected to be driven by the increasing demand from various applications such as electricity, heat, vehicle fuel, upgraded biogas, and cooking gas. The growing need to reduce emissions is expected to aid the overall market growth over the forecast period.