The global biosimilar contract manufacturing market size was valued at USD 5.3 billion in 2021 and is anticipated to exhibit a compound annual growth rate (CAGR) of 18.5% over the forecast period. The increasing popularity of biosimilars in treating diseases, such as cancer, autoimmune diseases, blood disorders, and others, and the low cost of biosimilars as compared to biologics are some of the major factors driving the market. During the COVID-19 pandemic, several biosimilars were approved for treating COVID-19. For instance, in September 2021, the Drug Controller General of India approved Hetero Healthcare’s biosimilar Tocilizumab for treating COVID-19. 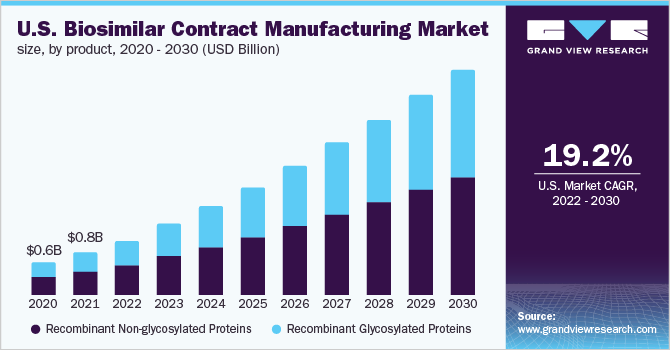 Such approvals are likely to improve the adoption of biosimilars in emerging countries and thus promote the market in developing countries in the coming years. The growth of the industry is attributed largely to the upcoming expiration of patents for blockbuster biologics. IQVIA states that 2020 marked the end for biologic patented drugs, such as Chantix, Forteo, Truvada, Ciprodex, and Afinitor, in the U.S. The industry is projected to expand due to the growing need for affordable, highly effective medications and the increasing number of biologics whose patents are about to expire. The prevalence of diseases, such as neurological disorders, cancer, autoimmune disorders, and blood disorders, is witnessing a steady rise.

The Cancer Tomorrow states that, in the years to come, the number of cancer cases is expected to rise. As per the estimates of Cancer Tomorrow, over 19.3 million cancer cases were reported in 2020, and this number is expected to rise to 30.2 million by 2040. The increasing incidence of cancer is expected to improve the demand for cancer biosimilars. This is expected to have a positive impact on the industry. The growing demand for low-cost and highly efficient therapeutics has improved the pipeline of biosimilar drugs in recent years. For instance, the Biosimilars/Biobetters Pipeline Directory reports that from 2013 to 2020, the biosimilar pipeline has grown by 108%.

Based on production technologies, the global industry has been further segmented into mammalian and non-mammalian. The mammalian segment accounted for the largest revenue share of more than 71.50% in 2021. The segment is expected to witness a significant CAGR during the forecast period. This is due to the fact that using mammalian cells for protein expression has the major benefit of producing mammalian proteins with the correct post-translational modifications that provide a native structure. Mammalian cells like Chinese Hamster Ovary (CHO) cell lines have been among the most preferred and about 70.0% of the protein therapeutics have been developed from CHO cells.

The non-mammalian segment also gained a significant share in 2021. Non-mammalian products include biotherapeutics developed for microbial sources. Microbial systems are commonly used to generate recombinant protein therapeutics. To date, approximately 650 protein drugs have been approved worldwide, with approximately 400 derived from microbial recombinant technologies. Furthermore, microbial products are used in the production of cytokines, hormones, enzymes, and MABs. These factors are assisting the segment’s growth.

The oncology segment is expected to grow at the fastest CAGR of 19.7% during the forecast. This is due to the high prevalence of cancer, including liver, colorectal, lung, stomach, breast, and blood cancers. According to the WHO, cancer is one of the major causes of death worldwide. 10 million deaths occurred in 2020 due to it. The high cost of cancer drugs and treatment is driving the demand for low-cost therapeutic drugs that are highly effective. This is increasing the demand for biosimilar drugs for cancer, which is promoting the growth of the segment. The chronic and autoimmune disorders segment accounted for the largest share in 2021. 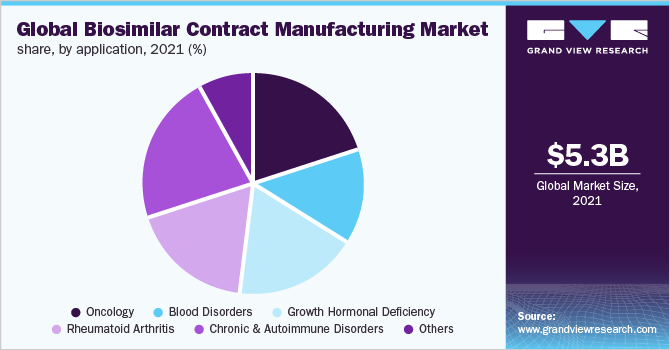 The most commonly occurring autoimmune disorders that can be treated by biosimilars are polyarticular spondylitis, plaque psoriasis, Crohn’s disease, and arthritis. Such conditions are commonly treated with biologics, such as adalimumab and etanercept, making them the most preferred therapy for autoimmune disorders. Boehringer Ingelheim, Momenta Pharmaceuticals, Pfizer, Sandoz, Zydus Cadila, and many other major pharmaceutical companies have been granted licenses and approvals for developing biosimilar versions of adalimumab. The high burden of these diseases is expected to promote the demand for biosimilars, thus boosting the segment growth.

The Europe region dominated the global industry in 2021 and accounted for the largest share of more than 47.00% of the overall revenue due to a well-defined regulatory framework for biosimilars and the presence of significant biopharmaceutical contract development and manufacturing organizations like Lonza, Boehringer Ingelheim GmbH, Rentschler Biopharma SE, and Element Materials Technology. In addition, strong healthcare infrastructure and an increase in product introductions have contributed to the expansion of the regional market. 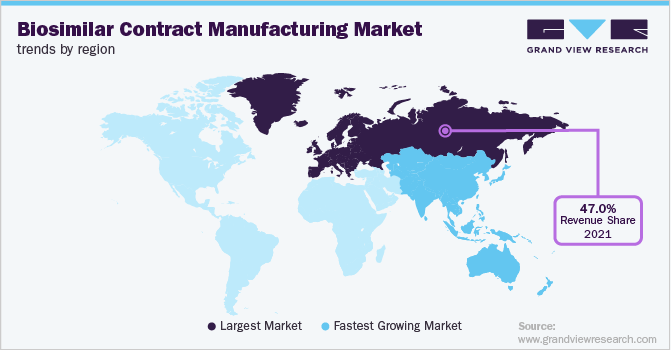 The high number of approvals of biosimilar drugs in recent years is further contributing to the adoption of biosimilars in the region and thus is promoting the growth of the region. In Asia Pacific region is expected to witness the fastest CAGR over the forecast period. The growing demand for less expensive therapeutic products and the high prevalence of chronic diseases are the key factors contributing to the region’s growth. Increasing focus on contract developments in countries including China, India, and South Korea is another major factor anticipated to drive the region’s growth. Rapid urbanization, the growing geriatric population, and lifestyle changes in Asia Pacific have also led to an increase in the incidence of non-communicable diseases, such as cancer, diabetes, and auto-immune disorders. This is fueling the demand for cost-effective treatments in the region, thus promoting regional growth.

The industry is highly competitive. Market players are adopting strategies, such as collaborations, partnerships, acquisitions, and expansions, to maintain their share in the market. For instance, in August 2021, Samsung Biologics announced that it plans to invest USD 205 billion and hire more people to improve its CDMO business in biosimilar, and other things in the coming years. It will benefit several Samsung businesses, including Samsung Bioepis, which deals with biosimilars, and Samsung Biologics, which handles contract manufacturing. Some of the prominent players in the global biosimilar contract manufacturing market include:

This report forecasts revenue growth at global, regional, and country levels and provides an analysis of the latest industry trends in each of the sub-segments from 2018 to 2030. For this study, Grand View Research has segmented the global biosimilar contract manufacturing market report based on product, production technology, application, and region: 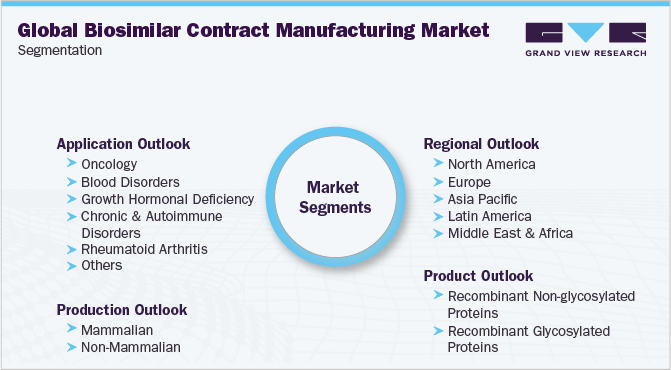 How big is the biosimilar contract manufacturing market?

b. The global biosimilar contract manufacturing market size was estimated at USD 5.3 billion in 2021 and is expected to reach USD 6.5 billion in 2022.

What is the biosimilar contract manufacturing market growth?

b. Europe dominated the biosimilar contract manufacturing market with a share of 47.4% in 2021. a well-defined regulatory framework for biosimilars and the presence of significant biopharmaceutical contract development and manufacturing organizations like Lonza, Boehringer Ingelheim GmbH, Rentschler Biopharma SE and Element Materials Technology.

Who are the key players in biosimilar contract manufacturing market?

What are the factors driving the biosimilar contract manufacturing market?

b. Key factors that are driving the biosimilar contract manufacturing market growth include increasing popularity of biosimilars in treating diseases such as cancer, autoimmune diseases, blood disorders, and others and the low cost of biosimilars as compared to biologics.