The global protein expression market size was estimated at USD 1.2 billion in 2016. Growing demand for novel biologic products for the treatment of severe chronic diseases such as cancer, anemia, and multiple sclerosis is a major factor contributing to the growth of the market.

Protein expression plays an important role in various applications including therapeutic protein production, biologics production, and research application. Various expression systems such as prokaryotic, mammalian cell, an insect cell, and yeast systems are used by manufacturers for proteomics research, genomics research, development, and manufacturing of biologics products. Thus, the demand for these products is expected to rise in the near future. 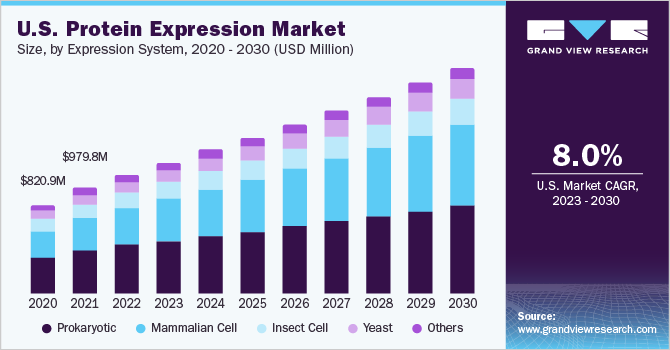 The increasing prevalence of several chronic diseases such as cancer, arthritis, asthma, diabetes, and infectious diseases is expected to be the major factor driving market growth. According to WHO, around 8.8 million people died, worldwide, due to cancer in 2015. Thus, there is a high demand for advanced biologics such as therapeutic protein for the treatment of such chronic diseases. These products are widely used by manufacturers for the development and production of biologics. Thus, increasing demand for biologics is expected to drive the adoption of protein expression products.

There has been an increase in R&D activities by many pharmaceuticals, biopharmaceutical, and biotechnology companies to develop and manufacture advanced biologics such as vaccines, monoclonal antibodies, and therapeutic proteins. Investment in R&D for effective drug designing and development is an important policy of the companies that propel the long-term growth of the company. For instance, Merck & Co., Inc., a leading healthcare company, invested around USD 10,124 million in R&D in 2016.

Stringent government regulations for the development and production of biologics could hinder the growth of the market. The new biologics undergo rigorous preclinical and clinical trials prior to regulatory approval. Commercialization of biologics including insulin, hormones, therapeutic antibodies, rising and vaccines is depending on the successful completion of clinical trials, which is a long, expensive, and uncertain process.

The main expression systems used for synthesis, modification, and regulation of proteins in living organisms are prokaryotic, a mammalian cell, an insect cell, and yeast. Prokaryotic expression systems were the highest revenue-generating segment in 2016 due to its large application, high production capacity, and inexpensive production.

Manufacturers are focusing on mergers, acquisitions, and collaboration to expand their product portfolio and to strengthen their position in the industry. For instance, in January 2017, Bio-Rad Laboratories, Inc. entered into an agreement to acquire RainDance Technologies, Inc., a leading provider of ultra-sensitive genomic tools, and have strong distribution channel worldwide.

The mammalian cell expression systems segment is projected to showcase the highest growth rate during the study period. This is due to the rise in the popularity of these systems for the production of biopharmaceuticals and research applications. This system provides several advantages including the production of post-translational modified proteins and high efficiency in drug discovery and preclinical studies.

The insect cell and yeast systems segments are also expected to grow at lucrative CAGR during the forecast period, because of increasing focus on proteomics research and rising government support for research activities. The availability of advanced systems such as the BaculoDirect Baculovirus Expression System and Bac-to-Bac Baculovirus Expression System is another factor driving the growth of the segment.

The protein expression products such as reagents, expression vectors, competent cells, and instruments are widely used by research institutes, biotechnology, and pharmaceutical companies for research, development, and manufacturing of insulin, human growth hormone, therapeutic antibodies, vaccine, and other products.

In 2016, the reagents segment was the largest revenue grossing segment of the market due to the large application of these products for research and biopharmaceuticals manufacturing. The repetitive purchase of reagents for various applications including therapeutic, industrial, and research is expected to boost the market growth.

The services segment is anticipated to witness the fastest growth rate during the study period due to the escalating trend of services for custom optimization of protein expression. In addition, the service providers are equipped with advanced products and research specialists, which is expected to propel the demand for protein expression services by manufacturers and research laboratories.

Protein expression is used for various applications in research, diagnostics, and therapeutics. The therapeutic proteins such as insulin, monoclonal antibodies, growth factors, hormones, blood factors, anticoagulants, enzymes, interleukins, and interferons are widely used products for the treatment of chronic diseases.

The therapeutic application segment dominated the overall sector in terms of revenue in 2016. This is due to the large application of protein expression for the production of biologics. These products provide high accuracy, efficiency, and quality in biologics production. This segment is also projected to grow at the highest rate during the forecast period owing to the growing popularity of therapeutic proteins over other drugs.

The research applications segment is also expected to grow at lucrative CAGR during the study period owing to rising government funding for proteomics and genomics research. For instance, in June 2016, the French government announced a plan to invest around USD 760.8 million in personalized medicine and genomics program to enhance the prevention and diagnosis of chronic diseases including cancer, diabetes, and rare diseases.

The U.S., U.K., Germany, France, China, Japan, and India are projected to account for the largest application of protein expression. The presence of big biopharmaceutical and biotechnology companies, the presence of well-developed healthcare infrastructure, and the availability of advanced products in these countries are some major factors contributing to market growth. 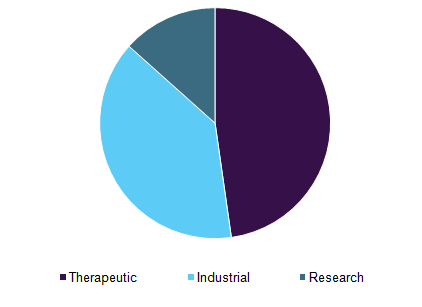 The pharmaceutical and biotechnological companies accounted for the largest revenue share in the market due to rising demand for therapeutic proteins such as insulin, growth hormone, and vaccines. In addition, increased investment in new drug designing and development is also contributing to market growth.

The contract research organization segment is projected to showcase the highest growth rate over the study period owing to the rising outsourcing activities by biotechnology and pharmaceutical companies for research and development of new drugs and biologics.

Well-developed healthcare infrastructure in the U.S. and some European countries like UK, Germany, and France have spurred the demand for advanced therapeutic products for chronic disease treatment. In addition, rising disposable income and improving healthcare infrastructure in developing countries such as China, India, Argentina, and Brazil is expected to boost market growth.

The rising popularity of biopharmaceuticals and growing healthcare awareness in developing countries such as India, China, South Africa, and Argentina are expected to boost sector growth. The demand for vaccines and advanced biologics is increasing in these countries owing to the rising burden of chronic diseases including diabetes, cancer, and hepatitis. The focus of companies to develop and manufacture novel biologicals along with availability advanced technologies are projected to drive the application of protein expression in the healthcare industry.

North America dominated the protein expression industry with the largest revenue share, because of the presence of many large biopharmaceuticals, biotechnology, and pharmaceutical companies such as Pfizer Inc., Merck KGaA, F. Hoffmann-La Roche Ltd, and Amgen Inc. in this region.

Highly developed healthcare infrastructure and a high focus on proteomics and genomics research activities in European countries such as France, Switzerland, UK, and Germany have fueled the growth of the European market. Also, the rising demand for biologics in this region due to the high prevalence of diabetes in this region is expected to propel the growth of the market.

Asia Pacific market is expected to grow at the highest CAGR during the forecast period, owing to rising penetration of contract research organizations and developing healthcare infrastructure in Asian countries including India and China. The availability of a massive genome pool, a large number of patients, accessibility of skilled personnel, and less stringent regulation for biologics production in Asian countries have propelled the sector growth in this region.

The leading players are involved in collaborations, regional expansions, mergers, and acquisitions to gain maximum revenue share in the sector. Mergers and acquisitions support the vendors to expand their existing product portfolio and geographical reach. For instance, in February 2014, Thermo Fisher Scientific, Inc. completed the acquisition of Life Technologies Corporation to strengthen its life science business, which includes cutting-edge proteomics and genomics technologies.

Rising regulatory approval for biologics and technological advancements in the field of research and drug development has led to the high demand for innovative products. The vendors in the sector are investing a large amount of money in R&D to develop novel products that cater to the unmet needs of their customers. For instance, Thermo Fisher Scientific, Inc. invested around USD 754.8 million in R&D in the year 2016.

This report forecasts revenue growth at global, regional & country levels and provides an analysis of the industry trends in each of the sub-segments from 2014 to 2025. For the purpose of this study, Grand View Research has segmented the global protein expression market on the basis of systems, product, application, end-use, and region: